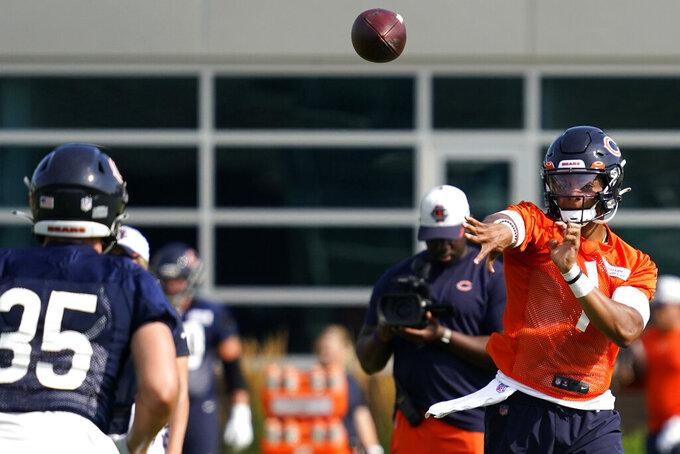 CHICAGO (AP) — Matt Nagy is so confident his starting quarterback is ready, the Chicago Bears coach wouldn't be too nervous if the NFL decided to open the season this week.

That's how strong an impression veteran Andy Dalton is making.

"One hundred percent,” Nagy said. “He’s got full control of this offense. Without a doubt. We could play a game tomorrow and be just fine.”

Of course, he'll take the time they have to smooth things out. The Bears still have a while to go before they stare down another team.

They open the preseason Aug. 14 against Miami, and their first regular-season game is Sept. 12, when they visit the Los Angeles Rams.

For now, there's plenty of work to do — for Dalton as well as prized rookie Justin Fields. And all eyes are on the quarterbacks as the Bears get ready.

The pace picked up Tuesday. The Bears practiced in pads and fans got to see them at Soldier Field for the first time since 2019. They'll practice with the Dolphins next week ahead of their matchup.

Dalton needs to continue to get the timing down with his receivers and running backs and show he will make the right checks at the line of scrimmage.

The three-time Pro Bowler might be in new surroundings after signing a $10 million, one-year contract in March, but he's not exactly in unfamiliar territory. He worked with offensive coordinator Bill Lazor in Cincinnati from 2016 to 2018.

“I’m very comfortable with what we are doing,” said Dalton, who has thrown for 33,764 yards with 218 touchdowns and 126 interceptions over nine seasons with Cincinnati and one in Dallas. “I think that’s just kind of being in the system and studying the book and making sure that everybody is on the same page.

“For me, I’ve been a part of so many different systems that there is not many plays that are new to me. Yeah, I’m very confident with what we have and got going. It’s about building that chemistry during camp and being ready for Week 1.”

The Bears no doubt expect great things from Fields. They're banking on him to develop in a way Mitchell Trubisky never did and take control of the offense once it's time to succeed Dalton. The big question around Chicago is how soon that will happen.

The Bears made it clear they are big believers in Fields when they moved up nine spots in the draft in a trade with the New York Giants to take him with the No. 11 pick in the draft.

He comes with a much more polished resume than Trubisky as the Big Ten Offensive Player of the Year in each of his two seasons after transferring from Georgia. He was a Heisman Trophy finalist in 2019.

Fields said he has been working hard, studying the playbook and reviewing video. And he's becoming more comfortable with the system.