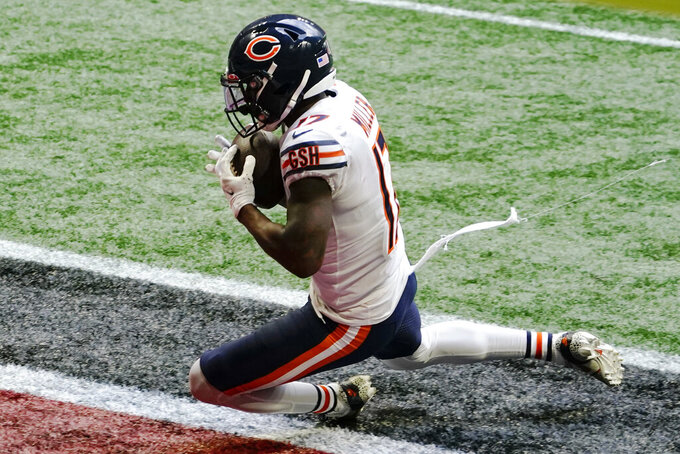 Chicago Bears wide receiver Anthony Miller (17) makes a touchdown catch against the Atlanta Falcons during the second half of an NFL football game, Sunday, Sept. 27, 2020, in Atlanta. (AP Photo/Brynn Anderson)

LAKE FOREST, Ill. (AP) — The Chicago Bears have made the quarterback change to Nick Foles, a move that was expected throughout the NFL since before training camp began.

Now they need some consistency to avoid situations like what they’ve experienced in the first three weeks of the season.

Bears coach Matt Nagy on Monday announced Foles would replace Mitchell Trubisky as the starting quarterback when they play the Indianapolis Colts. And with the change, the Bears are hoping to avoid more slow offensive starts.

The offense has been hit or miss, which led to Trubisky’s benching more than anything else.

Two wins after trailing by 16 points or more in the fourth quarter of each game had never been achieved by an NFL team in the same season, according to the Elias Sports Bureau.

The Bears had a wild swing the other way in their other game, a 17-13 victory over the New York Giants in which they led 17-0 and held on at the end.

“Hopefully in the future, we don’t have to dig ourselves out of any holes, but at the same time, again, I mean, that’s why you play four quarters and that just goes to show you that we have a very resilient team,” wide receiver Allen Robinson said.

Now that Foles is at quarterback, they’re hoping to settle into more consistency. For Foles, everything is becoming more familiar — and it helps.

“I felt good out there,” Foles said. “Not perfect, but I felt good. As I’ve been here since training camp, I’ve gotten to know my teammates more.”

Throwing to the tight ends was a problem all last year when the Bears got only 46 total receptions from the position, but on Jimmy Graham had six catches and two touchdowns Sunday. It was the first time in a regular-season game since Nov. 9, 2017, with Seattle that he had more than one TD catch in a game.

The two TD catches brought Graham’s total this season to three, equaling his total from a full season with Green Bay last year.

The Bears need to become more disciplined. They had 10 penalties for 80 yards against Atlanta, a drastic departure from their first two games.

“We had too many penalties,” Nagy said. “I think we had like 12 penalties going into this game, which I was really proud of our team being disciplined (earlier).”

Robinson, who doesn’t yet have a contract extension for next year, had 10 catches for 123 yards and his first TD catch of the season. He had just eight catches coming into Sunday’s game. Robinson might have had one other TD, but it was taken away by replay after officials first ruled simultaneous possession and a Bears score.

Trubisky. He has no contract for next season and the future is vague for him after Foles went out and earned the starting job Trubisky was said to have won coming out of camp.

Tarik Cohen suffered a torn right ACL in the game and is done for the season. Defensive back Sherrick McManis injured a hamstring.

3 — The Bears have had one interception in each game this season after Tashaun Gipson’s 24th career interception sealed Sunday’s game. In 2019, they had just 10 interceptions.