Quinn says he's on board as rebuilding Bears begin practices 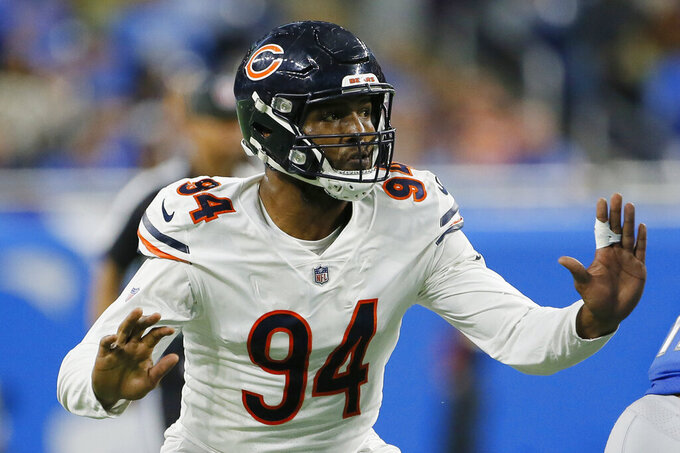 FILE - Chicago Bears' Robert Quinn (94) rushes a play during the second half of an NFL football game against the Detroit Lions in Detroit, on Nov. 25, 2021. Quinn joined the rest of the team on the practice field, Wednesday, July 27, 2022, for the first time under new coach Matt Eberflus after missing all offseason voluntary and mandatory work. (AP Photo/Duane Burleson, File)

LAKE FOREST, Ill. (AP) — Robert Quinn wanted nothing more than to remain with the Chicago Bears after setting a franchise record with 18 1/2 sacks last year.

The defensive end has his wish — for now.

Quinn joined the rest of the team on the practice field Wednesday for the first time under new coach Matt Eberflus after missing all of the offseason voluntary and mandatory work.

Quinn said he doesn’t expect or want to be traded, as the rumors suggested all offseason.

“I haven’t heard anything since being in the building, but I will say I don’t work upstairs, either,” he said. “I’m in the locker room.

This doesn’t mean the Bears are without controversy at the start of training camp.

Linebacker Roquan Smith, who wants an extension as he enters the fifth and final season of his rookie contract, was placed on the physically unable to perform list Wednesday.

Smith was at practice, just not taking part. Eberflus doesn’t want to reveal the injury that landed Smith on the PUP list, assuming there is one. Smith was at all the offseason practices — voluntary and mandatory — and did not have an injury then. The last offseason workout was in mid-June.

Eberflus had no problem talking about what he sees ahead for Quinn, even if the 2021 Pro Bowl player did miss all the offseason practices and mandatory minicamp.

Quinn had to accept a fine for his absence at minicamp, but said he didn’t mind because he was getting his “body right.”

Still, Quinn acknowledged he could easily be traded. The Rams and Dolphins both dealt him in the past.

"You wish guys could stay in one place forever, but at the end of the day, before you play you've got to sign a contract. So that just lets you know how it’s a business, how this game works.”

Quinn had only two sacks two years ago in his first season with the Bears, then bounced back by breaking Richard Dent’s franchise record. So he anticipated he would be someone the new coaching staff wanted to keep.

Besides, while he was with Dallas, he had played in a similar style defense to the 4-3 scheme the Bears are using. So it made sense he would be comfortable.

“Again, I thought last year gave me a little comfortability to stay in the building,” Quinn said. “But again, I’m just gonna do my part, bring a smile, work as hard as I can and just let everything take its course after that.”

And if the Bears trade him to a contender? Playing for a team picked by many to finish last can’t be too appealing.

“Well, people that say that,” Quinn said. “At the end of the day, we’re all professionals. I don’t think guys, from the rookies to the veterans, I don’t think no one’s coming in (saying), ‘Oh, we’ve gotta tank the season for next year.’

“I think everyone’s got the mindset we’ve got players to win games.”

Still, a lot can happen before the trade deadline in November.

“There’s a lot of if-ifs,” Quinn said. “The only thing I can control is myself. Whether I’m in this building or another building, all I can do is bring the best version of myself and keep the positive energy around.”