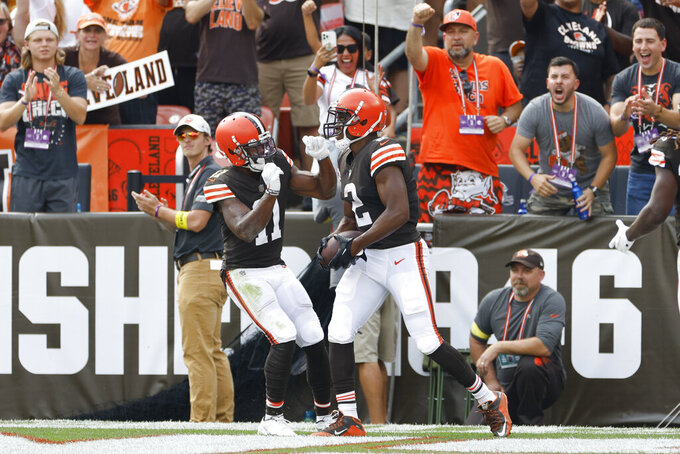 OPENING LINE: Browns by 4 1/2, according to FanDuel SportsBook.

TURNOVER DIFFERENTIAL: Steelers plus 4; Browns plus 1.

STEELERS PLAYER TO WATCH: LB Myles Jack. The former Jacksonville Jaguar is thriving in Pittsburgh after signing a two-year, $16 million deal in free agency. Jack tied a career high with 13 tackles last week against New England and with the Browns expected to test the Steelers' run defense behind running backs Nick Chubb and Kareem Hunt, expect Jack to be busy.

BROWNS PLAYER TO WATCH: S Grant Delpit has been involved in a pair of miscommunications by Cleveland's secondary the past two weeks that have resulted in long touchdown passes. Delpit didn't pick up receivers after they were released by cornerbacks. It will be interesting to see if he lines up deeper than usual to guard against another costly mistake.

KEY MATCHUP: Browns O-line vs. Steelers D-line. Cleveland rushed for 401 yards in its first two games, and the Browns figure to lean on Chubb and Hunt in what is traditionally a low-scoring, grind-it-out game between the AFC North rivals.

KEY INJURIES: Pittsburgh ILB Devin Bush was limited early in the week with a foot injury, but is expected to play. ... Steelers star OLB T.J. Watt remains out indefinitely with a left pectoral injury. ... Malik Reed, acquired in a trade with Denver on Aug. 31, took most of Watt's snaps last week against New England and is expected to do so again. The Steelers are 0-5 without Watt in the lineup during his six-year career. ... Browns DE Jadeveon Clowney (ankle) is out after getting hurt against the Jets. There's no timetable on his return. ... Star DE Myles Garrett (neck) missed practice Tuesday. ... Clowney's absence was felt in the second half last week as it allowed the Jets to pay extra attention to Garrett. ... All-Pro G Joel Bitonio missed practice with a biceps injury. ... RT Jack Conklin has yet to play after undergoing knee surgery in December.

SERIES NOTES: One of the NFL's nastiest feuds has been titled toward Western Pennsylvania since 1999. The Steelers are 36-8-1 since Cleveland's expansion rebirth. ... This is the first time since 2004 that Steelers QB Ben Roethlisberger won't be part of the matchup following his retirement. ... The Browns have won two of the past five. ... Steelers coach Mike Tomlin is 24-5-1 vs. Cleveland. ... Browns coach Kevin Stefanski missed Cleveland's 2020 playoff game in Pittsburgh after testing positive for COVID-19.

STATS AND STUFF: The Steelers are 11-12 on Thursday nights, including a 3-10 mark on the road. A loss in 2019 ended in ugly fashion with Garrett pulling off Steelers QB Mason Rudolph's helmet and striking him with it. ... Pittsburgh is looking for a spark in the passing game. First-year starting QB Mitch Trubisky is last among active quarterbacks in yards per attempt (5.1) and the Steelers have generated just two offensive touchdowns in nine quarters. ... Pittsburgh rookie WR George Pickens, who was spectacular at times during training camp, has just two catches for 23 yards. ... The Steelers failed to get a sack against the Patriots last week with Watt out of the lineup. It was just the second time in 93 games Pittsburgh has failed to get at least one sack. ... The Steelers had the NFL's worst run defense in 2021, but were effective against the Browns, holding them under 100 yards in both matchups. ... Steelers S Minkah Fitzpatrick has an interception in each of Pittsburgh's first two games. Fitzpatrick has 18 takeaways (13 interceptions, five fumble recoveries) since the start of 2019. ... The Browns are coming off an epic collapse against the Jets. Cleveland made several mistakes while blowing a 13-point lead in the final 1:55. ... The debacle, which included some communication breakdowns, prompted a players-only meeting by the Browns defense during the short week. ... The Browns are 7-2 at home on Thursday night and have won four in a row. ... RB Nick Chubb tied a career high with three rushing TDs last week. He's second in the league with 228 yards rushing. ... Garrett needs just one sack to pass Clay Matthews (62) for the most in team history. Matthews finished with 75, but 13 came before the league began recognizing sacks as an official stat in 1982. ... QB Jacoby Brissett had a solid performance against the Jets (22 of 27, 229 yards) but threw an INT on his last attempt. ... WR Amari Cooper had nine catches for 101 yards and a TD last week. ... Rookie K Cade York missed a PAT last week and it was costly, coming after the Browns went up 30-17.

FANTASY TIP: Cooper has developed a nice chemistry with Brissett, who knows he can rely on the veteran WR, especially in the red zone. Cooper has averaged eight TDs the past four seasons.