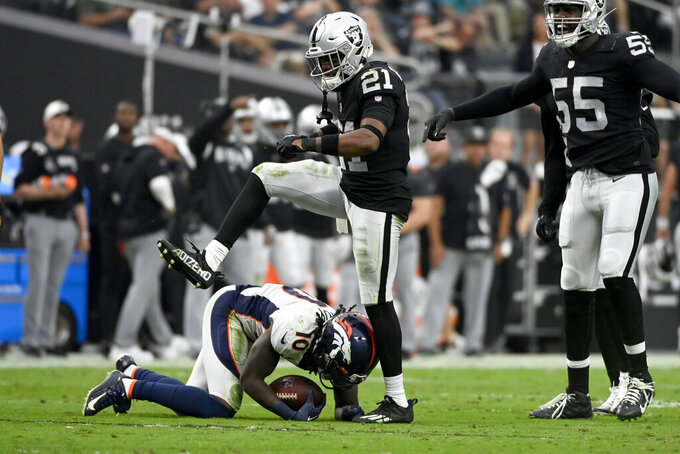 And five of them were thrown by AFC West rivals Justin Herbert of the Chargers and Denver's Russell Wilson.

Monday night the Raiders (1-3) face the division’s best quarterback in Kansas City’s Patrick Mahomes, who will provide their secondary its stiffest test of the season.

"He’s at such an elite status in terms of his ability to perform under pressure, make plays within the system,” Las Vegas defensive coordinator Patrick Graham said. “It’s a difficult challenge and I think our preparation for each week, we try to attack it brand new whoever the opponent is and try to see what they do best, how can we take it away, who are they going to in certain situations?”

With the Chiefs (3-1) and Mahomes, the Raiders are presented with numerous issues that are sure to challenge a secondary that has the slimmest margin for errors.

Mahomes, who ranks seventh in the league with 1,106 yards passing, is tied for first with 11 passing touchdowns, alongside Detroit’s Jared Goff and Baltimore’s Lamar Jackson. He has 2,546 yards passing in eight career games against the Raider, more than he's accumulated against any other opponent.

And considering that growth, Mahomes knows the area of Las Vegas’ secondary he can attack.

To his credit, though, Abram leads the secondary and ranks second on the team with 29 tackles combined.

Cornerbacks Nate Hobbs and Amik Robertson will patrol the outside and are coming in after productive performances against Russell Wilson and the Denver Broncos.

“I think we're very confident, we just got to fix some small things that we know we’re capable of fixing,” Robertson said. “Because a guy like Mahomes, you make a few mistakes, you might regret it at the end of the game. He’s one of the best quarterbacks in this league.”

And as its secondary has improved progressively each week, the Chiefs know better than to take desperate, one-win Las Vegas lightly.

“It’s kind of the same old secondary, honestly,” Kansas City receiver Mecole Hardman said. “I think they are led by 2-4 (Abram). (They’re) a group of guys that are going to get after the ball (and) that’s going to challenge you every single play. So, it’s just got to be something that we got to be ready for. We’ve got to get ready (and) we’ve got to get in on the run game. Get ready to block them guys and just make plays whenever we’ve got the chance to. They’re definitely a good group of guys and we’re going to look forward to playing them.”

Despite a 7-1 mark against the Raiders, Mahomes is anticipating a tight battle.

“It’s going to be ... both teams trying to play their best football,” Mahomes said. “It’s a true rivalry, we know that it doesn’t matter what the records are, you’re going to go out there and play. It’s going to be a dog fight. And they have a great football team, their record – they don’t have the best record - but every game, they’ve been in the game or been leading the game at certain points.”

NOTES: The team announced it signed linebacker Blake Martinez to the active roster from the practice squad. Martinez, who spent the last two seasons with the New York Giants, has appeared in 80 games with 76 starts over his six-year career. In a corresponding move, the Raiders waived WR Tyron Johnson and placed T Justin Herron on the Reserve/Injured List. ... Las Vegas also signed WR Albert Wilson to the practice squad. ... Veteran linebacker Denzel Perryman (concussion) returned to practice as a full participant on Friday. After missing Weeks 2 and 3, Perryman’s presence was felt in his return against Denver, before leaving the game with a concussion. ... WR Hunter Renfrow (concussion), S Roderic Teamer (illness), TE Darren Waller (shoulder) and CBs Sam Webb (hamstring) and Rock Ya-Sin (knee) were also full participants. ... LB Jayon Brown (hamstring) and TE Foster Moreau (knee) did not participate.