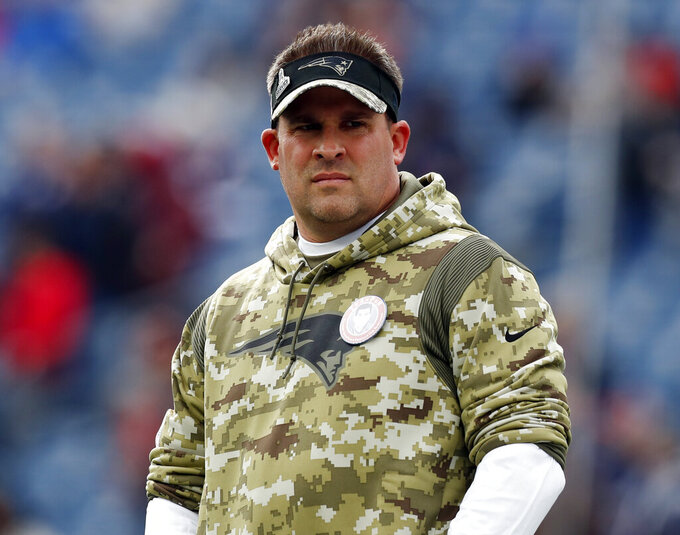 FILE - New England Patriots offensive coordinator Josh McDaniels looks on prior to an NFL football game Nov. 14, 2021, in Foxborough, Mass. The Las Vegas Raiders have made a request to interview the Patriots' McDaniels for their head coach opening. A person familiar with the search said Thursday, Jan. 27, 2022, the Raiders made the request to speak with McDaniels about filling the void left when Jon Gruden resigned in October. The person spoke on condition of anonymity because the team was not announcing its candidates. (AP Photo/Michael Dwyer, File)

The Las Vegas Raiders are trying to build their team the Patriot Way.

Owner Mark Davis tapped the NFL's most successful franchise over the past two decades by hiring Patriots director of player personnel Dave Ziegler as his new general manager. Davis is closing in on a deal to make New England offensive coordinator Josh McDaniels the new coach in Las Vegas.

The Raiders announced Sunday they had hired Ziegler to replace the fired Mike Mayock. A person familiar with the search says they are finalizing a deal with McDaniels to make him coach to fill the void created when Jon Gruden resigned in October. The person spoke on condition of anonymity because the team hadn't made an announcement.

Davis interviewed several candidates for both positions before picking a pair with a long history of working together. The two were college teammates at John Carroll and McDaniels brought Ziegler with him to Denver in his first head coaching stint.

The two have worked together in New England the past nine seasons, McDaniels as offensive coordinator and Ziegler working his way up through the scouting department before being promoted to director of player personnel in 2021.

The two take over a team coming off just its second playoff berth in the past 19 seasons. Las Vegas won its final four games of the regular season to qualify as a wild card before losing at Cincinnati.

Interim coach Rich Bisaccia guided the team through a difficult season after Gruden resigned in October following the release of his old, offensive emails. Star receiver Henry Ruggs III was released in November after being charged with DUI felonies following a fatal crash that killed a 23-year-old woman.

Bisaccia's work earned him the support of the players, but Davis opted to go a different direction.

McDaniels is viewed as one of the brighter offensive minds in the game with his many years working with Tom Brady on the Patriots and his work this season helping to develop rookie Mac Jones.

But his first experience as head coach fell apart quickly following a 6-0 start in 2009 after he traded away quarterback Jay Cutler in one of his first moves. Denver finished 8-8 that season and McDaniels was fired with a 3-9 record in 2010, losing 17 of his final 22 games as coach.

McDaniels was also fined $50,000 by the NFL for not reporting that the team’s director of video operations videotaped a San Francisco 49ers walk-through practice before the teams played a game in 2010 in London. The investigation determined that McDaniels did not know about the taping in advance and declined to view it, but he was punished for not immediately reporting the infraction to the league.

While several former assistants to Bill Belichick in New England have gotten head coaching jobs, the success rate of those coaches isn’t high.

The seven coaches — McDaniels, Romeo Crennel, Eric Mangini, Bill O’Brien, Matt Patricia, Brian Flores and Joe Judge — have combined for a .410 winning percentage and five playoff berths in 27 seasons they began as head coach. O’Brien had four of those playoff seasons in Houston, Mangini having the other with the Jets.

McDaniels takes over a team that has several key pieces in place, including quarterback Derek Carr, who is entering the final year of his contract.

The Raiders also have decisions to make this offseason whether to pick up the fifth-year options on 2019 first-round picks Clelin Ferrell, Josh Jacobs and Johnathan Abram,

Ferrell had a limited role this season and has struggled to make a big impact after being picked fourth overall. Jacobs has been fairly productive with two 1,000-yard rushing seasons but a guaranteed $10.1 million salary for 2023 could be pricey.

Abram has played only 28 games because of injuries in his three seasons and struggled in coverage at safety.