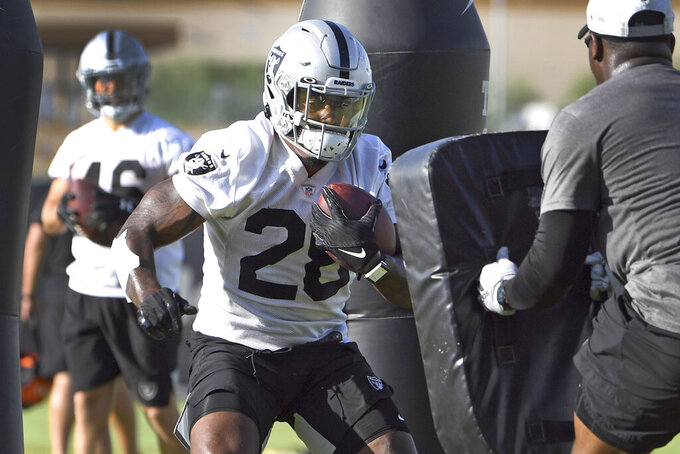 HENDERSON, Nev. (AP) — Josh Jacobs was among the NFL's busiest running backs in his second year with the Las Vegas Raiders, and learned what it's like to get plenty of attention from the defense.

A significant drop in his per-carry average accompanied better production around the goal line, so now the former Alabama back will see if he can keep both numbers up. He'll get every chance, even after the offseason addition of Kenyan Drake.

“Jacobs is the strength of this team,” coach Jon Gruden said of the 2020 Pro Bowler, “and we’ll certainly keep relying on him.”

Despite a drop in per-carry average to 3.9 yards from 4.8 as a rookie first-round pick in 2019, Jacobs tied for fourth with 12 touchdowns rushing after seven TDs as a rookie. He finished eighth in the NFL with 1,065 yards after rushing for 1,150 in his debut.

Feeling healthy and looking explosive a week into training camp, Jacobs is more aware than ever of his potential as the lead back. Veteran offensive lineman Richie Incognito believes Jacobs can fill that role.

“He’s got a feel for a young guy in the run game kind of unlike I’ve ever seen,” Incognito said. “You’ll see it nine times out of 10, he’ll hit that hole, he’ll hit it exactly where we want to do it and it’s really just having a feel for it. For a young guy to have it that fast is special.”

The offensive line in front of Jacobs had trouble getting settled in 2020, with four starters on the COVID-19 list at one point during the season.

Jacobs also battled an ankle injury that kept him out of one game and limited him to 15 carries per game over the final five contests. He missed four games as a rookie with a shoulder issue.

Both years, Jacobs tried to play through the injuries, showing the versatility of plowing through the line and lowering his head into a defender one play, then breaking tackles to get in the open field the next.

“Sky’s the limit for him,” said linebacker Nick Kwiatkoski, who sees Jacobs across the line of scrimmage at every practice. “He’s a guy as a linebacker you don’t want to tackle 10, 15, 20 times a game.”

Jacobs sees the addition of Drake less as competition and more as a boost to a group of running backs that includes Jalen Richard and fullback Alex Ingold.

Drake had a strong second half of 2019 in Arizona after a midseason trade from Miami, but fell short of 1,000 yards with the Cardinals last season. The 27-year-old Drake is getting $11 million guaranteed in a two-year deal.

“I think this is the first time I’ve been in the running back room where it’s just like crazy, since like ’Bama really,” Jacobs said. “I think that we know that crunch time if we need a play, I feel like we got a lot of guys that are going out there that he trusts to make a play. I feel like I’m one of them guys.”

Gruden makes it clear Jacobs is.

NOTES: TE Darren Waller was not seen at practice, nor were safeties Karl Joseph and Tyree Gillespie, who missed his fifth straight practice. Gruden said Gillespie has a soft tissue injury and could return soon. ... T Sam Young became the third Raider to announce his retirement since the start of camp. The 2010 sixth-round draft pick follows RB Theo Riddick and LB James Onwualu. ... General manager Mike Mayock contracted COVID-19 and is isolating at home.