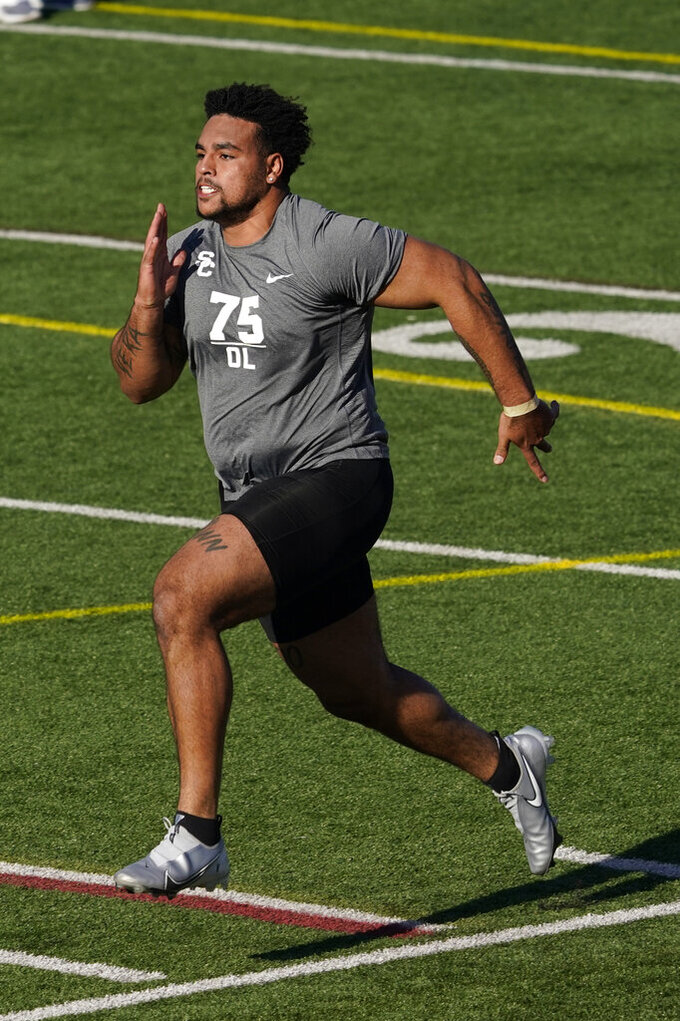 FILE - Southern California lineman Alijah Vera-Tucker participates in the school's pro day football workout for NFL scouts in Los Angeles, in this Wednesday, March 24, 2021, file photo. The Las Vegas Raiders spent the free agency period dismantling their offensive line and mostly ignoring the secondary. Now heading into the NFL draft, those are the two spots that appear to be the most urgent needs for the Raiders to fill starting with pick No. 17 in the first round. (AP Photo/Marcio Jose Sanchez, File)

Now heading into the NFL draft, those are the two spots that appear to be the most urgent needs for the Raiders to fill starting with pick No. 17 in the first round.

“You’re trying to set yourself up in the draft so that you can take the best player that you can take,” general manager Mike Mayock said. "We’re very aware of our needs. Obviously when the needs fit up with where you are in the draft board, that’s awesome. When they don’t, you have to be a little careful.”

The Raiders are hopeful former undrafted free agent Andre James can step in at center and have a couple of potential options at guard with 2020 fourth-round pick John Simpson and veteran Denzelle Good.

But right tackle remains a big void with 2018 third-round pick Brandon Parker having struggled in limited action the past three years and Jaryd Jones-Smith the other option despite playing no offensive snaps since first entering the league in 2018.

Luckily for the Raiders there figure to be plenty of options for tackles high in the draft with Virginia Tech’s Christian Darrisaw, Oklahoma State’s Tevin Jenkins and Southern California’s Alijah Vera-Tucker all possibilities in round one.

The Raiders could choose to wait to take a tackle with some intriguing prospects likely to fall to round two this year in a deep class and target the secondary.

Las Vegas has made only one notable addition so far in free agency in the secondary, bringing back 2016 first-round safety Karl Joseph for a second stint. But they lack a natural free safety on the roster to pair with 2019 first-round strong safety Johnathan Abram and also could use more help at cornerback alongside 2019 second-rounder Trayvon Mullen and 2020 first-rounder Damon Arnette.

None of those players has established themselves as top-flight starters in the NFL, but the Raiders could be more inclined to hope from improvement under new defensive coordinator Gus Bradley rather than making enough big draft investment.

“We’ve expanded some resources in our secondary,” Mayock said. “So, really, what we need more than anything is for all those players to take it up a notch or two. I’m talking about commitment to the game, work ethic, perseverance, being in the locker room working with your brothers.

"All those things are critical. We’ve expended some draft capital on what we think are some very talented players, and now all of them need to take a collective step forward.”

The Raiders got a third-round pick from Arizona in the deal for Hudson and a fifth-rounder from Seattle for Jackson, along with a 2022 fifth-rounder from New England for Brown. Those extra picks could help the Raiders move up early in the draft to target a specific need.

When Mayock went into last year’s draft with three picks in the third round he said it was “just like stealing” and that it should produce three starters if they did their jobs right. Instead, the Raiders got almost nothing out of those picks.

Running back Lynn Bowden Jr. was the first selection and was traded with a sixth-round pick to Miami before the start of the season for a fourth rounder. Receiver Bryan Edwards caught 11 passes as a rookie and linebacker Tanner Muse missed the entire season with a toe injury.

The Raiders have plenty of needs outside of the secondary and right tackle. Las Vegas could look for a receiver after disappointing rookie seasons from Henry Rugs III and Edwards last season, pass rushers on the edge or interior, or even a play-making linebacker despite investing heavily in the position already with last year's free agents Cory Littleton and Nick Kwiatkoski.

The draft has been a problem for the Raiders in recent years with the inability to find impact players a major reason for the franchise’s one winning record in the past 18 seasons.

The team finally gave a second contract to a first-round pick for the first time since 2008 first-rounder Darren McFadden got one. Kolton Miller, coach Jon Gruden’s first pick when he returned in 2018, got an extension.

But the rest of that draft for Gruden has been unimpressive. The Raiders recently released third-round defensive end Arden Key and fifth-round defensive tackle Maurice Hurst, leaving only Miller, Parker and seventh-round practice squad receiver Marcell Ateman on the roster out of the nine-man class.