Raiders offense looks to get out of recent rut 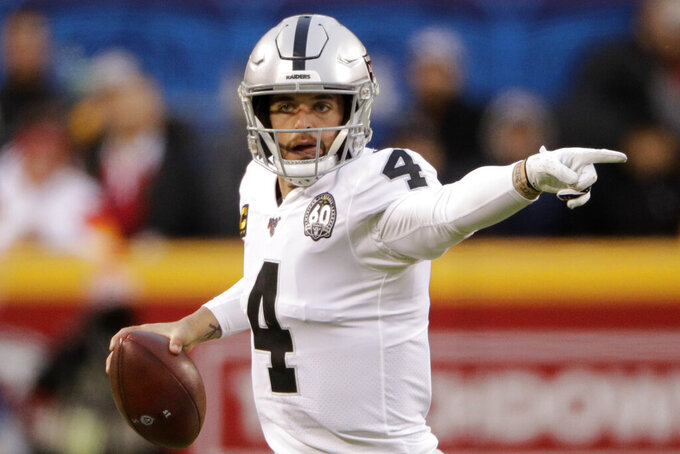 ALAMEDA, Calif. (AP) — If the Oakland Raiders can't get their offense out of a recent rut, their playoff chances will end even before they play their final scheduled game at the Coliseum.

What was one of the NFL's most efficient offenses over a long stretch that moved the Raiders into contention in the AFC West has struggled to get moving the past few weeks, leading to lopsided losses against the New York Jets and Kansas City.

The Raiders (6-6) need to get things fixed immediately. They enter the homestretch of the season one game behind Tennessee and Pittsburgh for the final wild-card spot in the AFC. A victory at home Sunday against the Titans would go a long way to getting things back on track this week.

Starting with the second half of a 17-10 win against Cincinnati on Nov. 17, Oakland went 24 straight drives without reaching the end zone before finally breaking through in garbage time of a 40-9 loss to the Chiefs last week.

The nine straight quarters without a touchdown matched the longest drought for the franchise since 2008 and was a stark difference with how efficient Carr and the offense had been for most of the season.

Starting with a victory in Indianapolis in Week 4 and continuing through a home win against the Chargers in Week 10, the Raiders led the NFL in yards per play (6.34) and ranked sixth in points per drive (2.35) thanks to a strong running game led by rookie Josh Jacobs and efficient performances from Carr and the mostly unheralded receivers in the passing game.

While Jacobs has mostly maintained his strong play in recent weeks, the passing game has stalled and the Raiders rank 18th in the league in yards per play (5.14) and last in points per drive (0.85) over the past three weeks.

Oakland also cut receiver Trevor Davis this week and is trying to find an effective combination out wide after coach Jon Gruden said he might "shake" things up this week. Tyrell Williams has been a starter all season when healthy but the other spot has rotated with Zay Jones, Keelan Doss, Marcell Ateman and Rico Gafford all possibly getting into the mix this week.

"We're in the process of shaking," Gruden said. "That's one of the reasons why we changed practice venues again. You know we've had to change gears a lot. It's an impact on us, and how we game plan, and how we call plays, and how we adjust. So, we'll get to the bottom of that here tonight, but we plan on shaking things up just a little bit yes."

NOTES: The Raiders held a indoor walk-through on a rainy Wednesday. Jacobs (shoulder), T Trent Brown (pectoral) and LB Kyle Wilber (ankle) would not have been able to participate if they had practiced. ... Gruden said he's hopeful Renfrow can return for the final game or two.