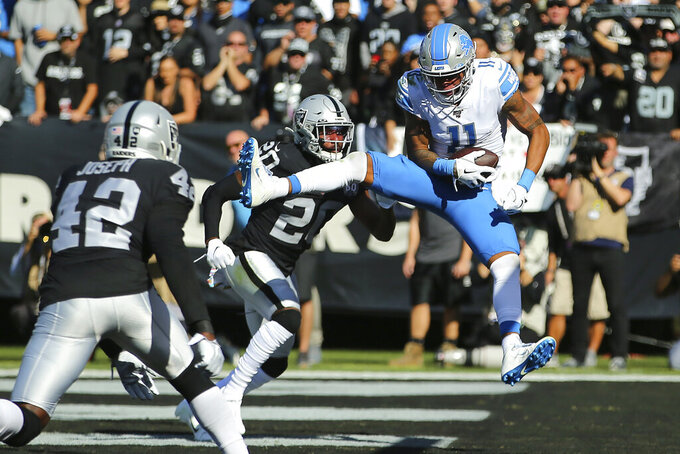 ALAMEDA, Calif. (AP) — Karl Joseph was finally living up to his first-round draft billing when a season-ending foot injury derailed all that and left a major hole in the Oakland Raiders secondary.

Joseph hurt his foot as he jumped to intercept a pass from Philip Rivers, marking the second straight game that he provided the game-sealing defensive play.

Joseph, a first-round pick by Oakland in 2016, had dealt with injuries and some inconsistent play his first three seasons but has played a key role this year in helping the Raiders (5-4) move into playoff contention in the AFC.

"As a team, we started to click as a unit, especially in the secondary," he said Monday. "I don't think it's just me necessarily. It's all of us playing good ball. As a team we're starting to click. That's what is most frustrating for me. We started to play some real good football and I wanted to be part of this team going forward. I believe we have a strong chance to go to the playoffs. That's what's frustrating for me."

Joseph's status with the Raiders was in doubt heading into the season as the team failed to exercise his fifth-year option after drafting Johnathan Abram in the first round.

But Abram went down with a season-ending shoulder injury in the season opener and Joseph was given a bigger role than expected. That peaked when he broke up a pass in the end zone on fourth down from the 1 in the closing seconds of a 31-24 win over Detroit on Nov. 3 and then had the interception at the end of a 26-24 win over the Chargers last Thursday.

Joseph said he'd like to remain with the Raiders after his contract is up but things will remain up in the air until he gets healthy. He will visit foot specialist Dr. Robert Anderson in Green Bay to determine whether he needs surgery and how long it will take to get healthy.

Joseph isn't the only member of the Raiders secondary who went down with an injury on the final drive against the Chargers, with slot cornerback Lamarcus Joyner injuring his hamstring earlier in the drive.

"It's hard," coach Jon Gruden said. "You've already lost your middle linebacker, now you lose your second safety and you lose your nickel corner potentially. This is the National Football League, this is going to be a tough assignment and we're going to have to have a great week of preparation."

The Raiders brought in some reinforcements by signing former Arizona safety D.J. Swearinger over the weekend to be in the mix to replace Joseph.

Swearinger spent two seasons playing for Gruden's brother, Jay, in Washington before getting cut by Arizona after four games this season. The Raiders had tried to get Swearinger last year after he was cut late in the year by Washington only to have the Cardinals win out because of a higher waiver priority.

Swearinger said he hopes to get up to speed quickly, especially because this defense is similar to the one run in Arizona.

"It's not that big a deal," he said. "This is probably my eighth defensive coordinator. There are only about four or five defenses and I've played every one of them."

The Raiders also added pass rusher Dion Jordan over the weekend but he can't join the team until his 10-game suspension for testing positive for Adderall ends Tuesday.

Jordan was drafted third overall in 2013 with a pick originally held by the Raiders. Oakland moved down nine spots to take cornerback D.J. Hayden and then tackle Menelik Watson in the second round, while Jordan went to Miami.

He had just three sacks his first two seasons and then missed all of 2015 for violating the league's substance-abuse policy. He had 5 1/2 sacks in 17 games the past two seasons in Seattle.

"He's a talented guy," Gruden said. "We liked him at Oregon, we liked his body of work in Seattle last year when we played against him. We're happy to have him and we need him, so we'll have a better piece of information after we actually get to see him."

The Raiders also designated linebacker Marquel Lee as the team's second player eligible to return from injured reserve. Lee hurt his ankle in Week 3 and is allowed to practice for the next 21 days before being activated. The first game he is eligible to play is Dec. 1 at Kansas City.