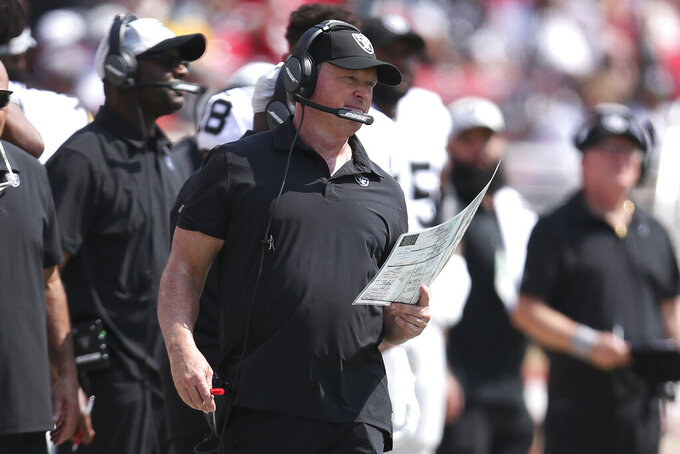 The improvement the Las Vegas Raiders showed offensively in year three under Jon Gruden was negated by the lack of progress on defense.

The end result was another season without a winning record or playoff berth.

That prompted an offseason of change for the Raiders, who brought in energetic new defensive coordinator Gus Bradley and a simpler system that they hope will allow the young players to be more aggressive.

“He’s just, he’s a ball of energy at all times,” defensive end Maxx Crosby said. “That’s what you want in a coach. He’s a big positive influence in this building and I’m looking forward to playing for him.”

How much the Raiders improve on a defense that ranked in the bottom two in the league in points allowed, takeaways, yards per play allowed and sacks in three seasons under Paul Guenther will depend more on the talent than the coaching.

The Raiders bolstered the pass rush with the addition of edge rusher Yannick Ngakoue and defensive tackle Quinton Jefferson and added help in the secondary in veteran cornerback Casey Hayward and rookie safety Tre'von Moehrig.

While the Raiders tried to rebuild the defense this offseason, they also tore down much of the offensive line that has protected quarterback Derek Carr.

Carr is coming off his most productive season in three years under Gruden and much of the improvement came from the willingness to throw it deep. After ranking second to last among starters in how far his average pass traveled in 2018-19, Carr moved into the top half of the league in that category in 2020 thanks to the fifth-most deep completions and third-most yards on deep throws last season.

Much of that success came on throws to Nelson Agholor, who left in free agency. So second-year player Henry Ruggs III will have to fill that void this year if the Raiders want to keep the deep passes as a big part of their game.

The Raiders once again had problems finishing drives. They ranked 25th in the NFL last season in converting red zone trips into touchdowns, which once again was a major area of focus in training camp.

Despite spending a first-round pick in 2019 on running back Josh Jacobs and getting back-to-back 1,000-yard rushing seasons out of him, the Raiders made a big move at running back this offseason. Las Vegas signed Kenyan Drake to an $11 million, two-year deal to add a better pass catcher and another running threat in the backfield.

“I think that we know that crunch time if we need a play, I feel like we got a lot of guys that are going out there that he trusts to make a play," Jacobs said. "I feel like I’m one of those guys.”

The Raiders debut season in Las Vegas was hurt by having no fans allowed at any games at Allegiant Stadium. This season, all adult fans will need to be vaccinated but won't need masks, providing what the Raiders hope will be a better home-field advantage than what existed last year when they went 2-6.

“We proved we can compete on the road. I’m hoping I can somehow find a way to help our team compete better in our Allegiant Stadium here because it is a spectacular place," Gruden said. “We need our fans to help us, that’s for sure.”