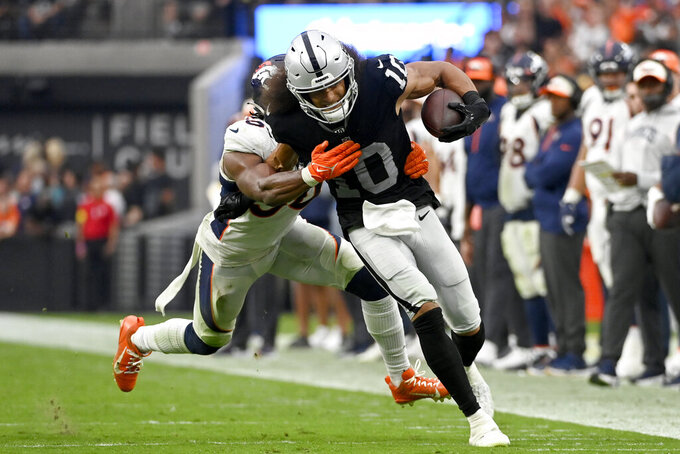 OPENING LINE: Chiefs by 7 1/2, according to FanDuel SportsBook.

TURNOVER DIFFERENTIAL: Raiders minus-2, Chiefs even.

RAIDERS PLAYER TO WATCH: RB Josh Jacobs is coming off his most productive game ever, running for a career-high 144 yards and two TDs last week against the Broncos. Jacobs had 175 yards from scrimmage on 33 touches, the most for a Raiders player in 10 years. Jacobs also showed some burst with his first run for at least 40 yards since his 2019 rookie season.

CHIEFS PLAYER TO WATCH: RB Clyde Edwards-Helaire has found another gear with a push from Isiah Pacheco behind him on the depth chart. Edwards-Helaire ran for 92 yards and a touchdown while catching a short TD pass in last week's win over the Buccaneers.

KEY MATCHUP: Jacobs against the Kansas City run defense. The Raiders running back is coming off a massive game against Denver but now faces what is quietly the NFL's top rush defense, thanks largely to the Chiefs' performance last week at Tampa Bay. They set a franchise record by holding the Buccaneers to 3 yards rushing on six carries in the win.

SERIES NOTES: The Raiders and Chiefs have played 126 times including the postseason with Kansas City winning 70 of the games and the teams tying twice. In their previous meeting in December, the Chiefs tied for the third-most points in a first half in franchise history with 35 on the way to a 48-9 romp. Kansas City has won three straight and eight of the past nine in the series.

STATS AND STUFF: The Raiders ran for 212 yards last week, their most in a game since 2016. ... Las Vegas is one of two teams to score on the opening drive in all four games this season. ... Raiders WR Davante Adams had his 33rd career 100-yard receiving game last week, fourth most in the NFL since 2014. ... Las Vegas DE Maxx Crosby leads the NFL with eight tackles for loss after having four last week. ... The Raiders are allowing 3.9 yards per carry, their second-best mark through four games in the past 15 seasons. ... Raiders CB Amik Robertson has two takeaways this season, including a 68-yard fumble return for a touchdown last week for the team’s first defensive TD since 2019. The 43 straight games without a special teams or defensive TD was the longest drought in the Super Bowl era. ... Las Vegas QB Derek Carr had a career-high five runs for first downs last week. ... The Raiders are tied for fourth worst by converting 44.4% of red zone drives into TDs and are fourth worst allowing 76.9% of red zone drives for TDs. ... Las Vegas edge rusher Chandler Jones had two sacks the previous time he faced Kansas City in 2018. Jones has no sacks in his first four games with the Raiders. ... Kansas City has won its past five Monday night games. Chiefs QB Patrick Mahomes is 6-1 on Monday night. ... The Chiefs could match the franchise record of 18 consecutive games with a field goal. ... Chiefs TE Travis Kelce could tie Tony Gonzalez's franchise record with a catch in his 131st consecutive game. Kelce would also tie Gonzalez for second among NFL tight ends with his 31st 100-yard receiving game. ... Chiefs CB L'Jarius Sneed led the Chiefs with nine tackles, a sack and a forced fumble last week at Tampa Bay.

FANTASY TIP: Edwards-Helaire has become a must-start running back, even against a tough Las Vegas run defense, after his excellent performance last week at Tampa Bay. The Chiefs showed a renewed commitment to the run with 37 carries for 189 yards and two touchdowns, and Edwards-Helaire has good enough hands to provide some points in the passing game.