Rams give Ravens another tough passing attack to deal with 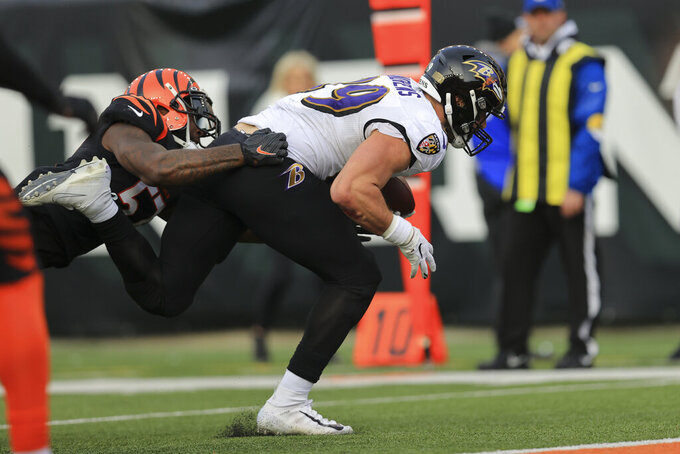 Baltimore Ravens' Mark Andrews (89) scores as he is tackled by Cincinnati Bengals' Germaine Pratt (57) during the second half of an NFL football game, Sunday, Dec. 26, 2021, in Cincinnati. (AP Photo/Aaron Doster)

This looks like the last thing the Baltimore Ravens need right now — another talented opponent with a dynamic passing game and plenty of motivation.

The battered Ravens host the Los Angeles Rams on Sunday in yet another difficult test for Baltimore's depleted secondary.

The Ravens allowed Cincinnati's Joe Burrow to pass for 525 yards last weekend, and now Matthew Stafford and Cooper Kupp arrive with a Los Angeles team that has a chance to clinch the NFC West with a win and an Arizona loss.

That's not all. The Rams are also just two years removed from a 45-6 loss to Baltimore — a prime-time game in 2019 in which Lamar Jackson threw five touchdown passes.

“I remember that. For me personally, that’s in the back of my head,” said Aaron Donald, the Los Angeles pass-rushing star. “It’s a little payback game. They got the best of us in a prime-time game, so we’ve got to come a lot better than we did last time. That’s a little fire lit under me personally.”

The Rams (11-4) may be facing Baltimore (8-7) at the right time. The Ravens have dropped four in a row as injuries and COVID-related absences finally became too much to handle. Baltimore can still make the playoffs — and could have Jackson back at quarterback after an ankle injury — but even after the return of a few defensive players this week, the Ravens are well below full strength.

Los Angeles, meanwhile, has four straight wins. Stafford is third in the NFL in passer rating. The only players ahead of him — Burrow and Aaron Rodgers — were Baltimore's previous two opponents.

Kupp has already set an NFL record by topping 90 yards receiving in 14 games this season.

“He and Matthew Stafford have an amazing understanding of what to expect from one another,” Ravens coach John Harbaugh said. “I think they read body language really well, because of all the time they’ve had together this year. It’s just two very talented guys, who I think are kind of, sort of made for each other."

Los Angeles already has a postseason spot wrapped up. Baltimore is in a much more precarious spot. The Ravens are a game out of first place, but they'd lose a head-to-head tiebreaker with AFC North-leading Cincinnati. A wild card is possible, but there's a huge logjam of AFC teams in play for those spots.

Jackson missed the last two games because of his ankle, but he was able to practice this week. Tyler Huntley, who played well for the Ravens against Green Bay, was on the COVID-19 list last weekend for the Cincinnati game. He was activated this week.

Josh Johnson threw for 304 yards for the Ravens against the Bengals.

Kupp has an outside chance of grabbing another slice of NFL history in Baltimore. The fourth-year wideout has 1,734 yards receiving in one of the league's most prolific seasons. He is 231 yards shy of surpassing Calvin Johnson’s league record of 1,964 yards receiving in 2012, a mark set while Megatron also was catching passes from Stafford in Detroit.

Kupp would need his biggest game of the season by far to get the record this week in the Rams’ 16th game, but he would have the benefit of another chance in the NFL’s new 17th regular-season game next week.

Baltimore tight end Mark Andrews also has a chance at a milestone. In fact, he's right on the verge. With 1,187 yards receiving, he needs just 15 more to pass Michael Jackson's 1996 total for the team's single-season record.

“I’m definitely aware. I think I’m like 15 yards away,” Andrews said. “It’s pretty cool. Someone said it’s been around for like 26 years, and that’s a big thing. That’s something where your name is stapled into an organization and a franchise, and not many people get that opportunity. So, that’s going to be, obviously, a huge honor, if I’m able to do that and get that.”

This game was moved up to the early Sunday TV window a few days ago, forcing the Rams to play a morning game for their natural Pacific time body clocks for the fifth time this season.

That’s not a problem for Los Angeles, however. Coach Sean McVay’s team is 4-0 in the early time slot on the road this season. The Rams are 8-2 in early games since 2017. McVay believes his team has figured out how to maximize its focus when it travels on Saturday and goes straight to the stadium on Sunday morning.

“I like it better that way, where we get up, we go, we go play,” McVay said. “Our guys have a good look in their eye in the mornings.”