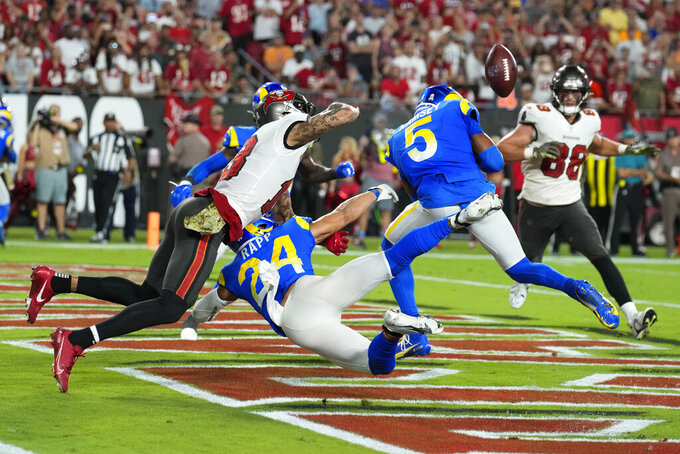 But Rams coach Sean McVay and quarterback Matthew Stafford put the blame for Sunday's 16-13 loss on the Rams' offense, which hardly resembles the unit that led LA to a Super Bowl title last season.

Brady took over with 44 seconds left and went 5 of 6 for 60 yards, including an 1-yard touchdown pass to Cade Otton with 9 seconds remaining, on the game-winning drive, the record 55th of his career.

The Rams (3-5) stopped Brady on downs from the Los Angeles 6 with just under two minutes to go.

But Matthew Stafford, who threw for 158 yards and one TD, was unable to run out the clock on the Rams’ final possession.

“It wasn’t good enough,” McVay said of the Rams’ offense. “I think everything’s got to be up for a debate. You’ve got to be able to look at it, but the one thing is, as coaches we’re responsible for identifying the problems and trying to provide solutions, and the players’ job is to be able to go and execute and be able to get it done.”

Cooper Kupp scored on a 69-yard reception in the second quarter and Matt Gay kicked field goals of 26 and 35 yards after halftime for the Rams.

Wide receivers Allen Robinson II and Van Jefferson sat in folding chairs next to each other in front of their lockers for an extended period looking straight down in an eerily quiet locker room after the game.

“Anytime you lose it's a gut punch,” Kupp said. “We've got to find a way to put points on the board and sustain drives.”

Stafford finished 13 of 27 without an interception. Kupp, playing on a sore ankle he injured in the previous week’s loss against San Francisco, had eight catches for 127 yards.

“It's not about just going out there and working hard, we've got to find a way to be better,” Stafford said. “It's frustrating, you know. There's plays out there to be made. ... I just wish I would have played better. If I play better we probably win that game.”

Accustomed to an explosive attack under McVay, the Rams rank near the bottom of the league in scoring this season.

“We've got a choice to make,” Rams center Brian Allen said. “We can lay down, or figure it out.”