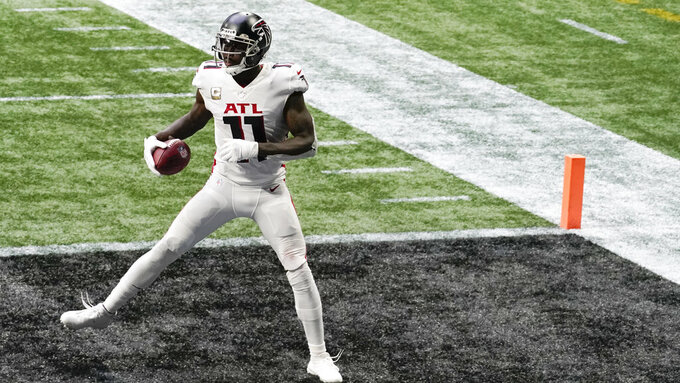 Atlanta Falcons wide receiver Julio Jones (11) lands in the end zone for a touchdown against the Denver Broncosduring the second half of an NFL football game, Sunday, Nov. 8, 2020, in Atlanta. (AP Photo/Brynn Anderson) 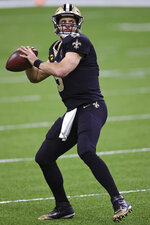 Following the deaths of Breonna Taylor, George Floyd and others, Rams players focused on long-term, systemic change and decided to pool resources to financially support organizations who are doing such work.

“In my 15 years in the NFL, this has definitely been one of the most inspiring things that I have had the opportunity to be part of,” standout tackle Andrew Whitworth says. “It was an amazing process that allowed us to learn about a variety of nonprofits working across Los Angeles to positively impact lives and advance social justice. The chance to hear directly from them on how we could help left us both humbled and motivated.

"On behalf of my teammates, we thank them for their daily passion and commitment to drive equity and are proud to support their important work.”

The Rams invited 25 organizations to share information about their work, those they serve and how the players could assist them. Then the nonprofits were rewarded with donations ranging from $20,000 to $50,000.

“My teammates and I are very aware of the social injustices that continue to occur," defensive lineman Michael Brockers says, "and we made a decision to become actively involved in helping to be part of the change that is desperately needed. It was awesome to hear from so many different leaders and nonprofits that are putting the work in to make real change, and I’m honored to support them.”

DREW BREES AND THE Y

Drew Brees and MISSION have partnered with the YMCA t o provide $1 million in neck gaiters to communities in need across the United States.

Underserved communities across the nation have been disproportionately affected by the pandemic and lack access to needed resources such as face coverings. This partnership is the latest in the Y’s efforts during the COVID-19 pandemic to meet the needs of the more than 10,000 communities it serves across the U.S.

“When I think of the YMCA, I think about all of the valuable resources and things they do for their local communities,” Brees says. “The opportunity to provide $1M of MISSION Gaiters to YMCA’s throughout the country to help protect our families is what it’s all about.”

Since March, the Y has also been providing child care to families of first responders and essential workers; food to families in need; wellness checks to isolated seniors; and virtual learning support to school-age children.

“The Y is responding to the most pressing social needs of our communities during the COVID-19 pandemic, just as we have done throughout our history,” says Kevin Washington, president and CEO of YMCA of the USA. “We are very grateful to MISSION and Drew Brees for making this generous donation and supporting the vital work of the Y during this incredibly difficult time for our communities.”

Julio Jones is a paper guy.

In a league that increasingly takes a high-tech approach, the Atlanta Falcons’ star receiver still prepares for each game with printed copies of the playbook and coverage schemes.

“He likes to grab his papers, put them in his little black bag, and you never see them again,” coach Raheem Morris says. “He makes paper copies of everything he wants to look at. He’s one of those old-school guys. He likes to write out his notes and what he needs to do on paper copies”

While it may be a bit out of touch with the modern game, the method sure seems to work for Jones.

“If you contradict yourself as a coach, he’ll pull those notes out of his little black bag and show you exactly what you said that was wrong,” Morris says. “He views the game sort of like a quarterback. I’m not going to say he memorizes the playbook, but he knows exactly what plays put him in the right position.”

In part because of Jones’ unique approach, Morris calls him “The Alien.”

“Sometimes you don’t understand him. He’s different,” the coach adds. “From the athletic aspect as well as the mental aspect.”

NFL players represented by Athletes First will be part of a partnership with EVERFI Inc., a leading social impact education provider, to deliver comprehensive African American history learning opportunities to students across the nation.

The program will launch in 30 schools in the greater Los Angeles and New York City areas in upcoming weeks. The goal is to present the program to thousands of young students, many mentored by Athletes First athletes and coaches over the next year.

“Discrimination and systemic racism have for far too long sown division in our communities and created social and economic inequities that are unjust and simply unacceptable,” says Brian Murphy, Athletes First CEO. “Our Athletes First family – including our players and coaches – cannot simply stand on the sidelines, but instead must act now. To do so, we decided to start with our country’s younger generation who have little to no bias as they begin their education process."

So the digital course, called 306 – African American History, will offer five interactive lessons teaching the importance of civic engagement, helping students potentially develop into future community leaders. The course will introduce students to important historical events and leaders, focusing on the leadership, strength, intellect, and creativity of the women and men who shaped African American History.

"306 – African American History will enhance and augment the student’s current curriculum, and members of the A1 family will also interact with the students to bring this education to life,” Murphy adds.

At launch, players involved in the program include David Long of the Rams, Anthony Barr of the Vikings, Matthias Farley of the Jets, and Derwin James and Casey Hayward of the Chargers.

“I am excited to support this project and am hopeful that it will create positive changes in the education system of our youth,” James says.

George Kittle, the 2019 All-Pro tight end, didn't have to think long about who he would honor during the NFL's My Cause My Cleats campaign.

Inspired by the service and sacrifice of military service members and their families, the 49ers star chose to honor Tragedy Assistance Program for Survivors (TAPS). The mission of TAPS is to provide comfort, care and resources to all those grieving the death of a military loved one.

The cleats were designed by Marcus Rivero, who is better known as Soles by Sir. Logos for all five military branches are included across the pair of cleats, along with the TAPS logo and Kittle’s jersey number of 85.

The LaMar family, who George met before last season's Super Bowl, appear on the cleats. Kittle gave Super Bowl tickets to the family in honor of Army Sgt. Martin “Mick” LaMar, who was killed in action in 2011.

Also appearing on the cleats are Kittle’s own friends and family who serve in the military.

“True sacrifice. That’s what these cleats represent. It’s a privilege to honor @TAPSorg and the LaMar family. Thanks to @usaa for helping me honor the fallen and TAPS for providing comfort, care & resources for their families. #MyCauseMyCleats #SaluteToService,” Kittle tweeted.