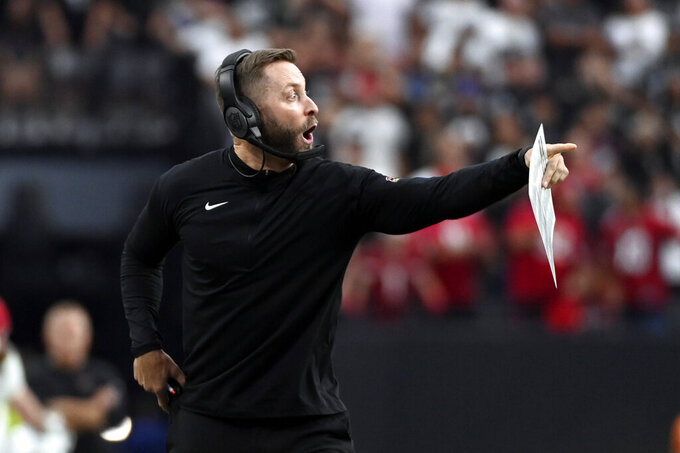 Arizona Cardinals head coach Kliff Kingsbury yells from the sideline during the second half of an NFL football game against the Las Vegas Raiders Sunday, Sept. 18, 2022, in Las Vegas. (AP Photo/David Becker)

BETTING LINE: Rams by 3 1/2, according to FanDuel Sportsbook.

TURNOVER DIFFERENTIAL: Rams plus-1, Cardinals plus-1.

RAMS PLAYER TO WATCH: QB Matthew Stafford had a lot of success in three games against the Cardinals last season, throwing for seven touchdowns and just one interception.

CARDINALS PLAYER TO WATCH: LB Zaven Collins had an inconsistent rookie season, but the second-year player is growing into a solid NFL linebacker. He's third on the team with 15 tackles, including two for a loss.

KEY MATCHUP: QB Kyler Murray showed why the Cardinals were comfortable giving him a $230.5 million contract, leading the team to a come-from-behind win over the Raiders. Now he'll go against a Rams defensive line that includes Aaron Donald and has usually kept him in check.

STATS AND STUFF: The Cardinals play their third straight game against a team that made the playoffs in 2021. ... Arizona overcame a 20-point deficit to beat the Raiders last week, which was just the fifth time in franchise history and first time since 1999 that the Cardinals overcame a 20-plus-point deficit. ... Against the Raiders, Cardinals QB Kyler Murray became the first player in NFL history to have a passing touchdown, rushing touchdown, 2-point conversion pass and 2-point conversion run in the same game. ... Cardinals RB James Conner scored five touchdowns against the Rams last season over three games, including four rushing and one receiving. ... Arizona now has 28 overtime victories in franchise history, which is tied with Denver for the most in NFL history. ...The Rams have won 10 of their past 12 games, including last season’s playoff run that began with a blowout win over Arizona. ... A loss in Arizona would put the Rams below .500 for only the second time in coach Sean McVay’s six seasons. The first time was two weeks ago with their season-opening loss to Buffalo. ... All-Pro DL Aaron Donald’s next sack will be the 100th of his career. He will be the seventh active player to hit the century mark. Although he has only four tackles and one sack this season, Donald leads the Rams with 10 quarterback pressures. ... Rams LB Bobby Wagner needs three tackles to reach 1,400 for his career, which began with a decade in Seattle. ... Tyler Higbee has 17 touchdowns, one shy of the Rams franchise record for tight ends set by Damone Johnson, the Los Angeles native who played for the Rams from 1986-92. ... Cooper Kupp and Matthew Stafford have teamed up for a touchdown pass in eight consecutive games, the longest active streak in the NFL. Kupp has racked up at least 90 yards receiving in 21 of the Rams’ 23 games since Stafford joined the team last season. ... The Rams don’t have a clear No. 1 running back this season, and they are off to a poor start on the ground with turnover and injuries on the offensive line. Darrell Henderson and Cam Akers have combined for just 138 yards, and the full team has a measly 117 net yards rushing, the second-worst total in the league.

FANTASY TIP: Arizona WR Greg Dortch might be a sleeper flex pick in deep leagues. He leads the Cardinals with 118 yards receiving and has also caught a touchdown. He figures to have a regular role at least until three-time All-Pro DeAndre Hopkins returns from his six-game suspension.