Ramsey wants out, doesn't want to be distraction for Jaguars 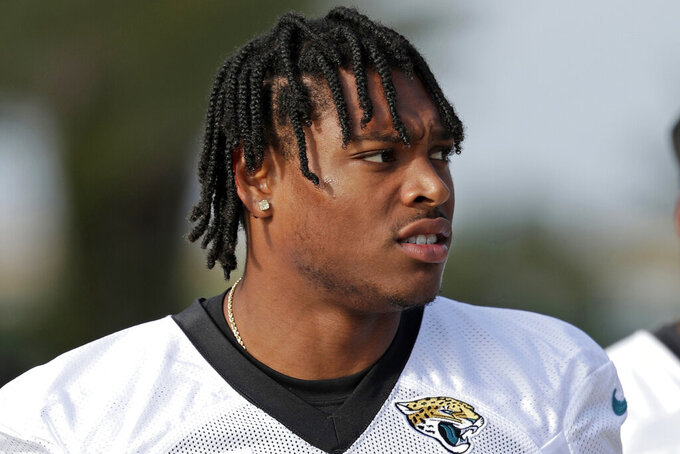 FILE - In this June 11, 2019, file photo, Jacksonville Jaguars cornerback Jalen Ramsey walks to the field for an NFL football practice in Jacksonville, Fla. Two-time Pro Bowl cornerback Jalen Ramsey has requested a trade following a sideline argument with Jacksonville Jaguars coach Doug Marrone. The Jags are willing to entertain offers. Ramsey's agent asked the Jags to move the disgruntled defender after Ramsey and Marrone got into a heated exchange during the team's 13-12 loss at Houston, according to a person with knowledge of the situation. The person spoke to The Associated Press on the condition of anonymity Monday, Sept. 17, 2019, because neither Ramsey nor the team had made the request public. (AP Photo/John Raoux, File)

JACKSONVILLE, Fla. (AP) — Jalen Ramsey arrived for the season in the back of an armored truck , sending a clear message to the Jacksonville Jaguars about his worth.

It would be fitting if he departed in a dump truck, assuming the Jaguars (0-2) unload their disgruntled defender.

Without saying why or providing much insight, Ramsey confirmed Tuesday that he wants out of Jacksonville and said he doesn't want to be a distraction as Jacksonville prepares to host Tennessee (1-1) on Thursday night.

He said his angst has nothing to do with the franchise declining to offer him a contract extension before this season, but hinted that the coaching staff has failed to use him properly.

Ramsey took two shots at Jaguars coach Doug Marrone, saying "I don't recall" twice when asked about the sideline argument between the two during a 13-12 loss at Houston on Sunday. Marrone uttered the same phrase after the game.

"Let's be clear about something in regards to that," Ramsey said during a 16-minute interview that added more confusion to an already-awkward situation. "I didn't leak that information. Me and my agent, we are not the ones who leaked that information. And I was very strict about that because I did not want it to get out.

"I didn't want to be a distraction. I didn't want everybody asking my teammates all type of questions throughout the week."

Ramsey, who said he hasn't spoken to Marrone since the outburst, said he expects to play against the Titans — unless he's traded. It could be a chance for Jacksonville to showcase one of the league's best cornerbacks on national television.

Two teammates, linebacker Myles Jack and cornerback Josh Robinson, stood in the back of the room to support Ramsey.

Two other teammates told The Associated Press the trade request had as much to do with the direction of the franchise than anything else. The players spoke to the AP on condition of anonymity because of the sensitive nature of the conversations.

They said Ramsey is one of several players currently questioning front-office decisions since Tom Coughlin was hired as the team's top football executive in 2017.

Meanwhile, they opted to give huge contracts to quarterback Blake Bortles, guard Andrew Norwell and center Brandon Linder. They already cut Bortles, who counts $15.5 million against the 2019 salary cap. And they're essentially stuck with Norwell and Linder, who have missed time with injuries and fallen well short of expectations.

"It is a business at the end of the day," running back Leonard Fournette said. "I totally understand where he's coming from; he's all about winning. I talked to him. It's only two weeks into the season. When losing happens like that, it feels like it's going on Week 8. It challenges us as men and as players.

"A lot of people say he comes with a lot of baggage, but he is one of the key parts of our team."

Jacksonville has lost 12 of its past 14 games, and Ramsey has been a focal point in the past two.

He allowed two touchdowns to Sammy Watkins in a season-opening loss to Kansas City, abandoning his zone on one and getting beat in man-to-man coverage on the other. He also took a poor angle on the first of Watkins' three scores.

Ramsey rebounded with one of the best games in his four-year career at Houston last week, but his play was overshadowed by his public protest.

Ramsey was visibly upset that Marrone didn't challenge DeAndre Hopkins' first-down catch late in the first quarter. Ramsey yelled at Marrone as he walked off the field and appeared to put his hands on the head coach. Marrone responded by getting in Ramsey's face and screaming.

"He's an elite player," defensive coordinator Todd Wash said. "Obviously I think some stuff gets misconstrued about how he's a hothead. He's just very competitive. It doesn't matter what he does, he wants to win."