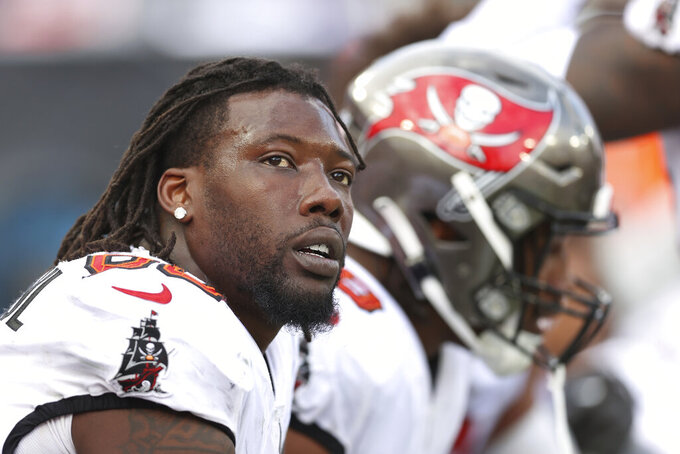 FILE - Tampa Bay Buccaneers outside linebacker Jason Pierre-Paul looks on during the second half of an NFL wild-card football game against the Philadelphia Eagles, Jan. 16, 2022, in Tampa, Fla. The Baltimore Ravens have agreed to terms with veteran pass rusher Pierre-Paul. The Ravens announced the deal Friday, Sept. 23, 2022, and said it was pending a physical. (AP Photo/Mark LoMoglio, File)

The Ravens announced the deal Friday, saying it was pending a physical. Pierre-Paul had 2 1/2 sacks in 12 games for the Tampa Bay Buccaneers last season. He was with the New York Giants from 2010-17 before joining the Buccaneers.

Ravens coach John Harbaugh said Pierre-Paul's daughter's birthday is Saturday, but he'd be arriving after that.

Harbaugh also said receiver Devin Duvernay (concussion) has been cleared to play Sunday at New England. The Ravens listed tackle Ronnie Stanley (ankle) as doubtful. Running back J.K. Dobbins, who hasn't played yet after a knee injury kept him out all last season, is listed as questionable after being a full participant at practice.