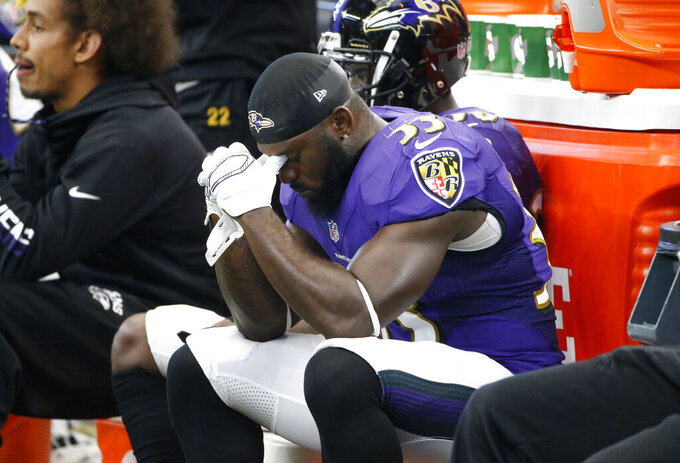 FILE - In this Nov. 20, 2016, file photo, Baltimore Ravens' Matt Elam sits on the bench late in the second half of an NFL football game against the Dallas Cowboys in Arlington, Texas. After being arrested on drug charges in February 2017, Elam was released. He finished with one interception during his short NFL career. (AP Photo/Ron Jenkins, File)

BEST FIRST-ROUND DRAFT PICK: OT Jonathan Ogden. After moving from Cleveland to Baltimore, the Ravens used the first draft pick in franchise history to take Ogden fourth overall in 1996 after giving serious consideration to Nebraska RB Lawrence Phillips. Ogden made the Pro Bowl in 11 of his 12 seasons and was inducted into the Pro Football Hall of Fame in 2013. Phillips was a bust. Not only did the Ravens find gold in Ogden, but later in that same round they selected Miami LB Ray Lewis. He also gained entry into the Hall of Fame after a 17-year career in which he helped Baltimore win a pair of Super Bowls. Another first-round pick, safety Ed Reed in 2002, was selected to the Hall of Fame.

BEST SECOND-ROUND PICK: RB Ray Rice. Picked 55th overall in 2008 out of Rutgers, Rice amassed 6,180 yards rushing over six seasons and eclipsed the 1,000-yard mark four times. He started all 16 games in 2012 and scored twice during Baltimore’s run to the championship. Voted to three Pro Bowls, Rice's career ended abruptly in 2014 when he was cut by the Ravens after a video was discovered of him striking his fiancee in the elevator of an Atlantic City hotel.

BEST LATE-ROUND PICK: P Sam Koch. A sixth-round pick in 2008, Koch has played in a franchise-record 224 consecutive games and owns a career average of 45.4 yards per punt. Koch made the Pro Bowl in 2015 and three times was a first alternate. He also holds on placement kicks.

WORST FIRST-ROUND PICK: S Matt Elam. Selected 32nd overall in 2013, Elam started 15 games as a rookie, but ended up playing in only 25 games over the next three seasons before being cut. He missed the entire 2015 season with a torn biceps and was a backup in nine games the following year. After being arrested on drug charges in February 2017, Elam was released. He had one interception during his short NFL career.

WORST SECOND-ROUND PICK: LB Sergio Kindle. The Ravens’ top pick in 2010, Kindle was taken 43rd overall after a strong career at Texas. Kindle provided a hint of things to come when he fell down two flights of stairs that July. He didn’t play that season, returned to play in two games in 2011 and was cut after participating in one game in 2012. He finished with one tackle.

BEST DRAFT TRADE: GM Ozzie Newsome swapped his second-round pick in 1999 for Atlanta’s first-rounder in 2000, a selection he used to take RB Jamal Lewis at No. 5 overall. Lewis had five 1,000-yard seasons with the Ravens, including 2,066 in 2003, and helped Baltimore win a Super Bowl. Another successful trade enabled Newsome to use the No. 18 overall pick in 2008 to take QB Joe Flacco out of Delaware. Flacco was an 11-year starter in Baltimore and led the Ravens to their 2012 NFL title.

WORST DRAFT TRADE: Baltimore gave up a second-round choice in 2003 along with its No. 1 pick in 2004 to New England for the 19th overall spot in '03, which was used to take QB Kyle Boller of California. Boller went 20-22 as a starter with the Ravens and threw 45 TD passes with 44 interceptions and 36 fumbles over five seasons. He played all 16 games only once, going 9-7 as a starter in 2004. Without a first-rounder in 2004, Newsome used his initial draft choice in the second round to take DT Dwan Edwards, who started only 23 games in five seasons with Baltimore.

DID YOU KNOW THEY ONCE DRAFTED?: Mr. Irrelevant. Only once did the Ravens have the final pick in the draft, which was used in 1998 to give TE Cam Quayle of Weber State the title. He failed to make the team before allocated by Jacksonville to the now-defunct NFL Europe. Quayle played in 10 games for the Barcelona Dragons before hurting his neck and retiring. He is now a dentist.