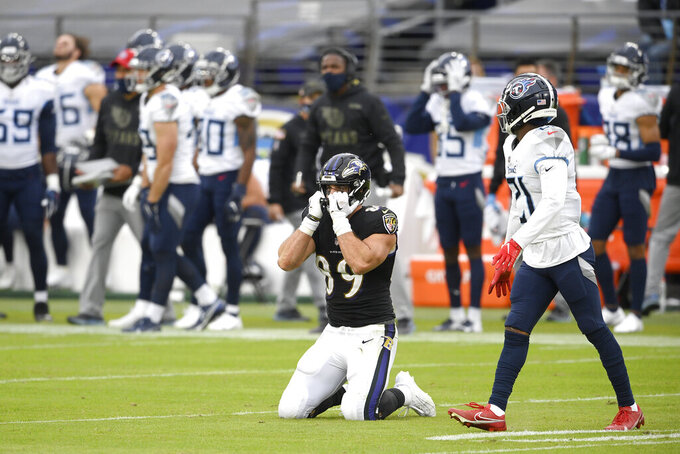 Baltimore Ravens tight end Mark Andrews (89) reacts after failing to catch a pass against Tennessee Titans cornerback Malcolm Butler, right, on a third down play during the second half of an NFL football game, Sunday, Nov. 22, 2020, in Baltimore. The Titans won 30-24 in overtime. (AP Photo/Nick Wass)

BALTIMORE (AP) — The Baltimore Ravens were looking for a bit of revenge and seeking to get back on course following a misstep on a rainy night in New England.

As defending AFC North champions, they were also striving to make a move within the division.

None of that happened.

Instead, a deflating 30-24 overtime loss to the Titans on Sunday dropped Baltimore into third place, four games behind unbeaten Pittsburgh and in back of the Cleveland Browns.

The Ravens (6-4) already have twice as many defeats as last season, when they went 14-2 and earned the top seed in the conference before losing their opening playoff game — to Tennessee.

Though Sunday's defeat wasn't nearly as much of a dud as against the Titans in January, the Ravens were left to consider what went wrong — again — after their second straight defeat and third in four games.

That dreary loss to the Patriots last Sunday night was not just an aberration, but rather the appetizer for this distasteful defeat.

After limiting Titans star Derrick Henry to 44 yards on 18 carries through the first three quarters, the Ravens crumbled, perhaps because they were lacking depth without injured starters Calais Campbell (calf) and Brandon Williams (ankle).

Henry capped a 133-yard rushing performance with a 29-yard touchdown run in overtime to win it. Back in January, he logged 195 yards rushing in Tennessee's 28-12 upset.

“We just can’t put 60 minutes together as a football team," Ravens defensive lineman Derek Wolfe said. “We’ll put a half together. This week, we finally put three quarters together. And we have to play better in the fourth quarter.

“I don’t know if it’s because guys are getting worn down; I don’t know what it is. We’ve got a lot of young guys on the field, though."

The final play of the game was typical of this season for the Ravens. They've got enough talent to win, but when the situation arises for that skill to play out, it just doesn't happen. And that is why Henry turned a seemingly routine run into a winning score.

“He’s the best running back in the league for a reason," Wolfe said. “He got away from me, and that’s my fault. I’ve got to make that play, so I’ll take the heat for that. That’s on me. That’s nobody else’s fault but mine.”

Oh, but there was plenty of blame to go around earlier. There were dropped passes, bad penalties and missed tackles. On the touchdown late in regulation that gave Tennessee a short-lived lead, four different Ravens failed to bring down A.J. Brown on his 14-yard score.

“You have to tackle better," coach John Harbaugh said. “That’s the best run-after-contact team in the league. We did well early, but we didn’t finish strong enough.”

The Ravens are going to have to finish the season strong to reach the playoffs for a third year in a row. It doesn't immediately get much easier: Next up is a matchup with the Steelers on Thanksgiving night.

“This season is whatever we make it to be," rookie linebacker Patrick Queen said. “We’ve still got chances to do what we want to do. As long as we just move on to next week and just get better in practice, we’ll be fine.”