Ravens looked good in every phase in rout of Chargers 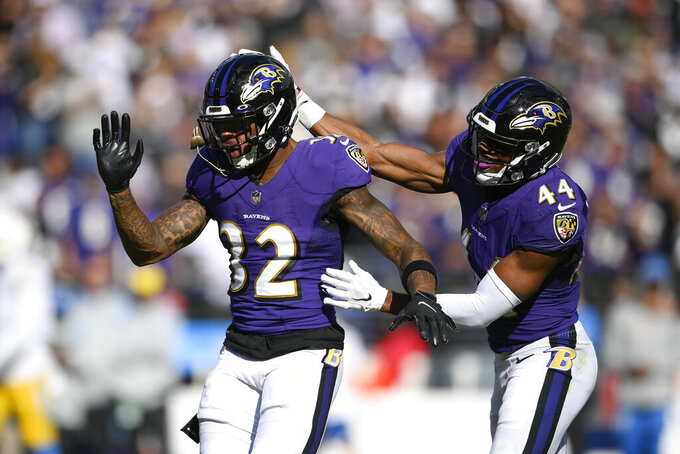 OWINGS MILLS, Md. (AP) — At first, John Harbaugh said this was just one excellent game. It didn't necessarily indicate anything about his team's long-term prospects.

Then, when asked whether a 28-point victory over another division leader might raise eyebrows around the NFL, Harbaugh admitted it probably would.

“That’s OK with me,” the Baltimore coach said. “We like raising eyebrows in a good way.”

The Ravens beat the Los Angeles Chargers 34-6 on Sunday, a lopsided result that was hard to see coming even after Baltimore won four in a row before this matchup. For much of this season, Baltimore has needed Lamar Jackson to be spectacular, but this past weekend, the Ravens controlled the game in so many ways that it was hard to pinpoint which factor was most important.

Baltimore (5-1) ran the ball at will early on, slowed the Chargers' highly touted passing game, and looked very much like a Super Bowl contender while pushing Los Angeles (4-2) aside with ease.

Jackson threw for 167 yards and ran for 51. After Baltimore's running backs were nonfactors in a win over Indianapolis, the trio of Latavius Murray, Le'Veon Bell and Devonta Freeman combined for 115 yards on 26 carries against the Chargers, with each scoring a touchdown.

The Ravens brought in those three veterans after J.K. Dobbins and Gus Edwards went down with major injuries before the season even started.

“To see them do what they did today and what they’re going to do for the rest of the season is a pretty cool story," Harbaugh said after the game. "I’m looking forward to seeing how it plays out.”

The Ravens controlled the line of scrimmage Sunday on both sides of the ball, outrushing the Chargers 187-26 and doing enough with their pass rush to cause problems for Los Angeles quarterback Justin Herbert.

Jackson did take three sacks, losing a total of 27 yards. There are times when his elusiveness may backfire, causing him to try to keep plays alive instead of getting rid of the ball. The Ravens twice stopped the Chargers on downs in San Diego territory, but in both situations settled for field goals. A sack for a loss of 10 pushed Baltimore back the first time that happened.

It was quite a turnaround for the Baltimore secondary, which was picked apart by Carson Wentz the previous game and also had trouble in coverage against the Raiders and Chiefs earlier this season. Herbert threw for only 195 yards.

Safety DeShon Elliott in particular had a big game with a sack and an interception. He returned to the starting lineup after being inactive the previous two weeks.

“Great communication. We were playing as a team, playing together — as brothers," Elliott said. “I love these guys in the locker room — offense and defense. I think we just went out there and played Ravens football, played the way we know we can play.”

Linebacker Patrick Queen had only 19 snaps, according to Pro Football Focus. That was by far his lowest count of the season as the Ravens used Josh Bynes in a bigger role.

Harbaugh said thigh issues kept Queen's snap count down. In his limited duty, Queen did have the highest PFF grade of anyone on the Baltimore defense.

“We didn't really have a pitch count on him or any of the guys. We just had them in personnel groupings and you see how it goes," Harbaugh said Monday. "I think he played with confidence. I think the pressure was off just a little bit with some of the calls that have to be made in there, and freed him up a little bit. Next week's a new week.”

Harbaugh didn't have an update Monday on Murray, who injured an ankle. He said there might be a resolution soon on tackle Ronnie Stanley, whose ankle problems caused him to miss a fifth straight game.

The Ravens acquired another offensive lineman Monday when they were assigned tackle Brandon Knight via waivers from Dallas.

35 — wins for Jackson, now the most by a quarterback before age 25 since the 1970 merger. Dan Marino previously held the mark with 34.

Baltimore hosts another team with a winning record Sunday when the Cincinnati Bengals (4-2) come to town. A win would give the Ravens a two-game lead atop the AFC North.