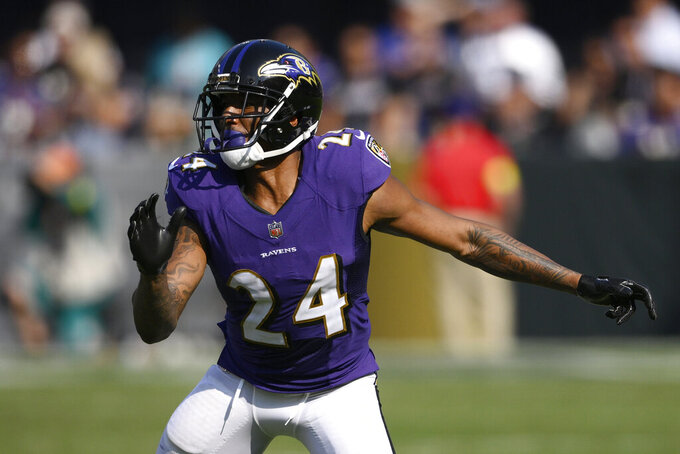 FILE - Baltimore Ravens cornerback Marcus Peters plays in the second half of the team's NFL football game against the Miami Dolphins, Sept. 18, 2022, in Baltimore. After missing all of last season, Peters finally came back in Week 2 against Miami, and it would be an understatement to say that was a rough day for him and the Ravens' secondary. Then the defense showed some improvement in a win over New England last weekend, and Peters was a big part of that. (AP Photo/Nick Wass, File)

And as the ball bounced quickly toward the sideline, Marcus Peters came diving in to smother it before it went out of bounds.

It was another big turnover for the Baltimore defense — and it capped an impressive turnaround for Peters in his second game back from a major knee injury.

After missing all of last season, Peters finally came back in Week 2 against Miami, and it would be an understatement to say that was a rough day for him and the Ravens' secondary. Then the defense showed some improvement in a win over New England last weekend, and Peters was a big part of that.

A three-time Pro Bowler and two-time All-Pro, Peters faces the task of helping Baltimore become less vulnerable to big passing days by the talented quarterbacks on the schedule.

The Ravens finished last in the NFL against the pass last season, when Peters was out, and that's right where they're ranked this year heading into Sunday's game against Josh Allen and Buffalo.

The names in the secondary — Peters, Marlon Humphrey, Marcus Williams and first-round draft pick Kyle Hamilton — suggest Baltimore has the ability to improve. The first thing the Ravens could use is better health. Humphrey had been dealing with a groin issue before the Miami game, and Peters was in his first game in 20 months.

The Dolphins rallied from a 21-point deficit to win 42-38. Peters was targeted seven times in that game, allowing six catches for 90 yards and a touchdown, according to Pro Football Focus.

Against New England, he was targeted four times, allowing only one catch.

“It's going to take some time for all of us to kind of get this thing rolling," Peters said. “But once it's rolling, it's going to be clicking at the right time. That's what we need.”

In fact, the Ravens are tied for the league lead in takeaways with eight. In addition to his fumble recovery, Peters had a forced fumble and an interception against the Patriots.

With Baltimore up 31-26 in the fourth quarter, Hamilton forced a fumble after a catch by Agholor. It was a big play for the rookie, but it would have been moot if Peters hadn't jumped on the ball before it went out of bounds.

“That’s a fumble catch that not too many people are ever going to make,” coach John Harbaugh said. “His ball skills are just one of a kind, so a turning point play in the game.”

The Ravens are hoping they can avoid a repeat of the Miami game going forward, and with players such as Peters working their way back into form, that seems like an attainable goal.

“It's been huge,” defensive back Brandon Stephens said. “He's been in the league for a while now, so just having him back, he brings a lot of energy to the room.”

NOTES: Newly signed LB Jason Pierre-Paul was on the field at practice Wednesday. Harbaugh said the team will shoot to have him ready this weekend. ... Harbaugh said NT Michael Pierce (biceps) is deciding whether to have season-ending surgery or play with his injury and have the operation after the season. ... Ronnie Stanley (ankle) was listed as a full participant at practice, and if he can play for the first time in more than a year, that could give Baltimore some help at LT. Patrick Mekari (ankle) is another option at the position but didn't practice Wednesday. ... LB Justin Houston (groin) did not practice and RB J.K. Dobbins (chest) was limited.