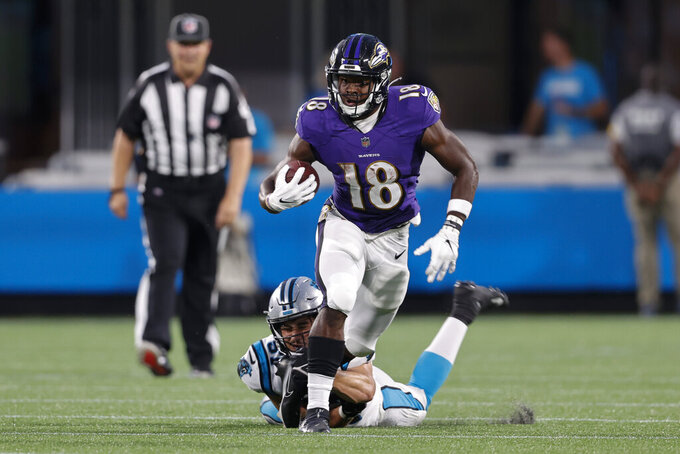 Baltimore Ravens running back Nate McCrary is is tackled by the Carolina Panthers during the first half of a preseason NFL football game Saturday, Aug. 21, 2021, in Charlotte, N.C. (AP Photo/Nell Redmond)

CHARLOTTE, N.C. (AP) — Many of the Baltimore Ravens players weren't aware they'd made NFL history until coach John Harbaugh walked into the locker room after Saturday night's 20-3 win over the Carolina Panthers and told them.

Tyler Huntley threw for 187 yards, and the Ravens tied an NFL record with their 19th straight preseason win.

Nate McCrary and Ty’Son Williams rushed for touchdowns for the Ravens, who equaled the mark set by Vince Lombardi’s Green Bay Packers, who had a 19-game winning streak in exhibitions from 1959 to 1962.

“It’s a good feeling to have because you can see the type of culture we have as an organization," said Huntley, who played almost the entire game. "We strive to win every time we step on the field. It shows you how much depth you have.”

Harbaugh said while some critics may discard the accomplishment because it's the preseason, he doesn't.

“I believe everything in life has meaning," Harbaugh said. "... It's something only one other team has done, the Vince Lombardi Packers and I think that is notable.”

Lamar Jackson did not play for the Ravens.

McCrary ran for 64 yards and Williams 47 yards, including a grinding 20-yard score, as the Ravens outgained the Panthers 167-33 on the ground.

Huntley started slow, missing on his first four passes, including the pick. But he started to heat up against Carolina's second-team defense, completing 15 of his next 16 pass attempts.

“I just had to get into a rhythm and get us on track,” Huntley said.

Sam Darnold had his first action at quarterback for Carolina, but left after one seven-play series.

Darnold started the drive at the Baltimore 33 after Derrick Brown tipped Huntley's pass at the line of scrimmage and edge rusher Haason Reddick, who had dropped back in coverage, grabbed the easy interception.

But after a 16-yard completion from Darnold to former New York Jets teammate Robby Anderson and a 9-yard run by Chuba Hubbard, the Panthers drive quickly stalled. With a first-and-goal at the Ravens 6, Darnold threw one pass away while under pressure and the Ravens stuffed three Hubbard running plays to take over on downs. DeShon Elliott came up with the big stop on fourth-and-goal at the 1 after Hubbard appeared to make a bad cutback.

“We just were going to run our base stuff,” Panthers coach Matt Rhule said. “We didn't have our goal-line packages out there and all of those little things.”

“We should be able to score with our base plays," Darnold said. "We should have punched it in.”

The Panthers didn't play running back Christian McCaffrey, who has 29 touchdowns rushing in 51 games.

Darnold said it was good to get his feet wet in a game and hopes to play more in Carolina's third preseason game.

“We just want to continue to build off that first drive — obviously score touchdowns — but just continue to see a good operation, getting in and out of the huddle and making the right checks and everyone being together and then punching it into the end zone,” Darnold said.

Will Grier relieved Darnold and played into the third quarter, completing 11 of 14 passes for 144 yards. P.J. Walker finished up for Carolina, and was 1 of 8 for 8 yards, further clouding Carolina's No. 2 quarterback situation.

Grier said the Ravens defense threw a lot of blitz packages at the Panthers.

“They do a lot of different things, probably more exotic than anything I have seen in the preseason,” Grier said.

Carolina's offensive struggles continued in the red zone, where it is 1 of 7 scoring touchdowns in the preseason.

Baltimore only started five regular starters on offense with receivers Sammy Watkins and Marquise Brown sitting out. The team's leading receiver was fourth-string tight end Josh Oliver, who caught seven of the 10 passes thrown his way for 50 yards.

Panthers second-round draft pick Terrace Marshall Jr. had another big game, hauling in a 34-yard catch from Grier and finishing with three catches for 50 yards. The rookie wide receiver from LSU had three receptions for 80 yards, including a 60-yard catch against the Indianapolis Colts last week.

For the first time in the franchise's history, the Panthers had two male cheerleaders on the sideline as part of their 20-person cheerleading team.

Ravens: Backup linebacker L.J. Fort left in the first half with a knee injury and did not return.

Panthers: Backup safety Kenny Robinson left the game in the third quarter with a knee injury.