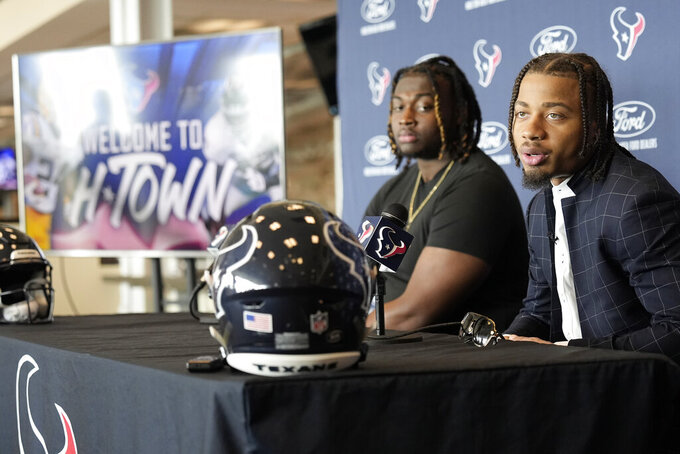 HOUSTON (AP) — On a team that could use help at just about every position, the Houston Texans addressed several important needs in this year’s draft.

The Texans won just four games last season for the second straight year after winning the AFC South the previous two seasons as they traded or released almost all their stars.

Houston hadn’t had a first-round draft pick since 2019, but had two this season to help boost the talent on this rebuilding team.

The Texans used the No. 3 pick on LSU cornerback Derek Stingley Jr. and traded down from the 13th pick they received as part of the Deshaun Watson trade to No. 15 to get offensive lineman Kenyon Green later in the first round.

“The last few days we’ve made some progress to build the team here for next season," general manager Nick Caserio said. “But it's definitely a work in progress."

New coach Lovie Smith, who was promoted from defensive coordinator following David Culley’s firing after one season, said earlier this month that the Texans couldn’t play the type of football they want to play if they didn’t get better at cornerback.

The addition of the talented Stingley should certainly help in that area. He had six interceptions and broke up 15 passes as a freshman in 2019 to earn All-America honors, but has played just 10 games in the last two seasons because of injuries. He played just three games last season before having foot surgery.

The Texans aren’t concerned about his limited play over the past two seasons and believe he can be the shutdown corner their defense desperately needs.

“He has been a productive player,” Caserio said. “He was a productive player early on in his career. He had some bumps in the road there in ’20 and ’21, but in the end, we felt comfortable with Derek. We think he is a good player ... fits the profile of what we’re trying to do.”

In the second round, the Texans got Baylor safety Jalen Pitre with the 37th overall pick. Pitre, who played for the Bears for five seasons, earned All-America honors in 2021. He had 75 tackles, including 18½ for losses, 3½ sacks, two interceptions, three forced fumbles and seven pass breakups last year.

Stingley and Pitre should be able to contribute immediately and help improve a defense that ranked 31st in the NFL last season.

The Texans did not take a quarterback in this draft after shipping Watson to the Browns this offseason. So that leaves Davis Mills as the team’s quarterback after he started 11 games as a rookie last season with Watson sitting out amid a trade request and 22 lawsuits by women alleging sexual harassment or assault.

While not upgrading the quarterback position, the Texans did add talent around Mills in the draft. Green was a two-time All-American at Texas A&M and started every game in his three seasons with the Aggies.

The Texans also got Alabama receiver John Metchie, who should be a good addition to play with top receiver Brandin Cooks. Metchie had 96 receptions for 1,142 yards and eight touchdowns last season for the Crimson Tide. He tore his left ACL during the College Football Playoff semifinal, but said he will be ready to play when training camp begins in July.

The Texans got another Alabama player when they took linebacker Christian Harris in the third round.

The Texans addressed the need to improve their running game by taking Florida’s Dameon Pierce in the fourth round with the 107th pick. Houston finished last in the NFL in yards rushing last season after ending the 2020 season ranked 31st.

Pierce is an aggressive runner who doesn’t shy away from contact. Last season his helmet was knocked off on a run against Florida State around the 5-yard line, but he kept running for a touchdown.

The Texans went heavy on the Southeastern Conference in this draft with six of their nine draft picks playing in the league.

“Not that you can say, well, what happens in the SEC is what’s going to happen on Sunday. But go through the draft and kind of go through the history (and) there’s a lot of good players in that conference.”

Stingley added that playing in the SEC was a constant challenge, even when he was only facing his teammates.

“Even in practice every single day, with the schools that we went to, we had to be ready,” he said. “Not just weekends. Every day.”

THE REST OF DAY 3

Along with Pierce, the Texans added three other picks on the final day of the draft. Houston took Stanford defensive tackle Thomas Booker and Oregon State tight end Teagan Quitoriano in the fifth round and offensive tackle Austin Deculus in the sixth.