Receiver Agholor getting accustomed to new offense with Pats 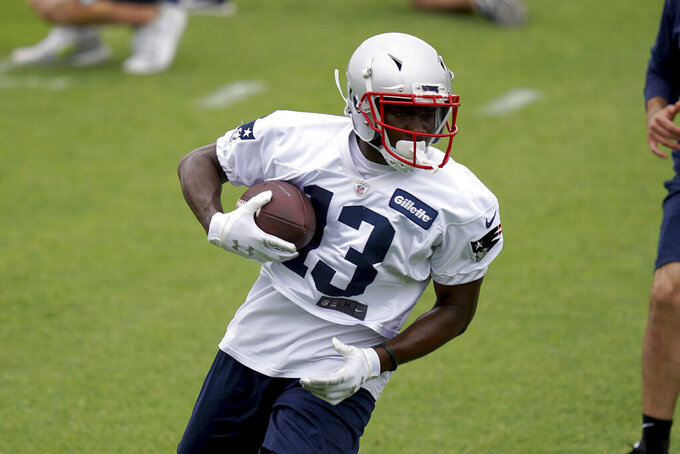 FOXBOROUGH, Mass. (AP) — Transition is nothing new to Nelson Agholor.

After five seasons in Philadelphia, the wide receiver left the Eagles to sign as an unrestricted free agent with Las Vegas in 2020.

Now, after a year with the Raiders, he is on to New England where he’s joined a group of pass catchers that has a new look to it.

Gone are Julian Edelman, who retired earlier this offseason as the second-leading pass catcher in franchise history with 620, and Damiere Byrd, who moved on to Chicago after catching 47 passes with the Patriots last year.

In Jonnu Smith (signed as a free agent from Tennessee) and Hunter Henry (free agent, Los Angeles Chargers), a couple of key additions were added to the tight end position as well.

No stranger to the Patriots, Agholor hauled in nine passes for 84 yards in the Eagles’ 41-33 win over the team in Super Bowl 52.

“We’ve known Nelson for a while, but having him here you certainly have a little different perspective,” Patriots coach Bill Belichick said as the team continued organized team activities on Friday.

“He’s a smart kid, he’s got a lot of position flexibility and good skill and talent. Like everybody else learning from scratch, (he’s) learning a little bit of a new offense and some things, the way we call things and do things and all that. But (it’s) nothing that he or any other new player can’t handle. It’s just part of the process, but he’s doing well, (and it’s) good to work with him.”

The hope in New England is that the 6-foot, 198-pound Agholor will provide the offense with a deep threat, something he did last year in Las Vegas where he had career highs in receiving yards (with 896) and yards per catch (18.7) on 48 receptions while matching his career best in touchdown receptions with eight.

It’s a challenge Agholor is willing to accept.

“I believe that your mindset has to be that you want to grow as a player,” the 28-year-old Agholor said.

“You want to challenge yourself, you want to become better than you were the year before, and that’s why you’re in this business. I don’t put pressure on myself. I just approach it as that’s what’s in front of me — an opportunity to grow as a player and just try to answer that challenge.”

Another OTA gave Agholor the opportunity to work with the Patriots four quarterbacks — returning starter Cam Newton, returning backups Jarrett Stidham and Brian Hoyer, and 2021 first-round draft pick Mac Jones — although Newton sat out the latter part of the day’s session after appearing to injure his throwing hand.

For Agholor, it was another day in the process, a process of growing accustomed to another new system.

Agholor has appeared in 87 games over the six seasons he’s played in the NFL since entering the league as a first-round draft pick of the Eagles. He’s caught 272 passes for 3,411 yards (12.5 yards per catch) and 26 TDs over that time.

“It’s a grind. I’m enjoying. I think I’m picking up things, but it’s been a grind and I’m enjoying it.”