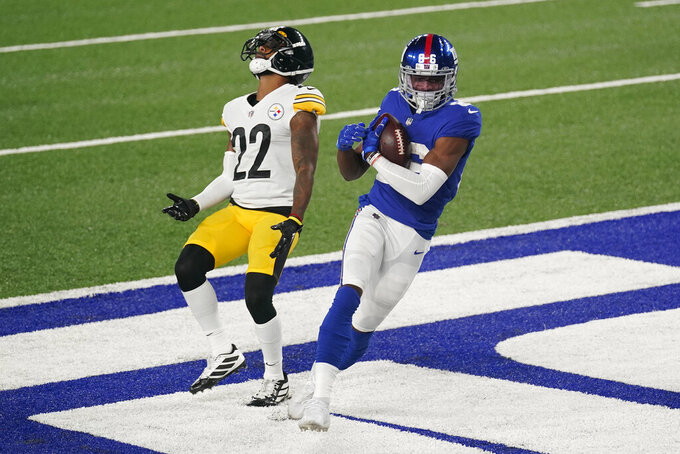 EAST RUTHERFORD, N.J. (AP) — New York Giants wide receiver Darius Slayton is picking up where he left off at the end of his rookie season. He's making plays and scoring touchdowns.

Slayton is one of those players who should be on everyone's fantasy team. The fifth-round pick from Auburn has 10 touchdown catches since the fifth game of last season.

The number is tops among receivers since Oct. 6.

Slayton, who led the Giants with 740 yards receiving in 2019, jump-started his season on Monday night, catching six passes from Daniel Jones for 102 yards and two touchdowns in a 26-16 loss to the Pittsburgh Steelers.

“I just want to make plays and find my way to the end zone as often as possible,” Slayton said after practice on Wednesday. “Hopefully, I'll be able to continually find my way there the rest of this year.”

While some experts wondered whether he would be as productive in his second season, Slayton has not concerned himself with that. He wants to be consistent and help the Giants start winning. They travel to Chicago to face the Bears (1-0) on Sunday.

Slayton, whose eight TD catches tied A.J. Brown of Tennessee for best among rookies in 2019, does not expect the Bears' secondary to start shading his way.

“We got a guy named Saquon Barkley that they have to worry about,” Slayton said. “That really helps a guy like me as far as that goes.”

The other thing that has helped Slayton is being able to develop a relationship with Jones. They came into the league together with the quarterback being the sixth pick overall.

“We have literally been catching and throwing since Day 1,” Slayton said. “So I think that familiarity is definitely there and we will continue to build on it.”

Jones and Slayton faced the Bears on Nov. 24 and hooked up four times for 67 yards.

Jones targeted Slayton nine times against the Steelers despite being under intense pressure from the Pittsburgh front seven.

“There are a lot of guys once they take a shot or once they start to feel a little bit of the pressure, they tuck and run or whatever,” Slayton said. "D.J. did a good job of standing in there all night and throwing, some throws under duress, some throws getting hit. He was still really accurate and productive.”

Jones said Slayton can be counted on to be open in the right spots.

“He is certainly a big-time playmaker for us,” Jones said.

NOTES: Rookie LB Carter Coughlin did not practice Wednesday because of a hamstring injury. Starting WR Golden Tate, who missed the opener, was still limited by his hamstring injury. ...LB Tae Crowder, who missed last week with a hamstring injury, was back at practice. ... Six players who spent all or a significant portion of their careers with the Giants are among the 130 modern-era nominees for the Pro Football Hall of Fame’s Class of 2021. The group includes DE Justin Tuck, RB Tiki Barber, G Chris Snee, TE Jeremy Shockey and punters Sean Landeta and Jeff Feagles.