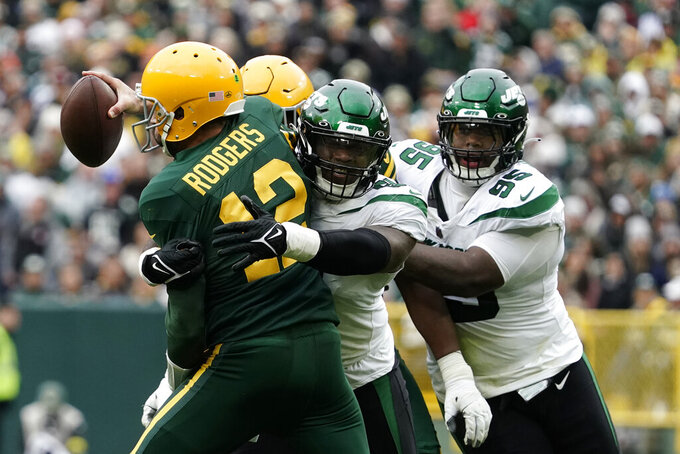 BETTING LINE: Packers by 4½, according to FanDuel Sportsbook

AGAINST THE SPREAD: Packers 2-4; Commanders 2-4

TURNOVER DIFFERENTIAL: Packers minus-4; Commanders minus-5

PACKERS PLAYER TO WATCH: QB Aaron Rodgers will need to play at something closer to the MVP form he showed the past two seasons for the Packers to start winning again. Rodgers was sacked four times and pressured throughout the loss to the Jets. He’s playing through a right thumb injury.

COMMANDERS PLAYER TO WATCH: WR Terry McLaurin is usually the focus of opposing defenses. With Taylor Heinicke replacing Carson Wentz at quarterback against the NFL's top passing defense and the possibility of Washington missing two other receivers, there's even more of an onus on McLaurin to make an impact.

KEY MATCHUP: Packers offensive line vs. Commanders defensive line. Packers coach Matt LaFleur didn’t rule out the possibility of making changes to his starting offensive line after the Jets’ front four dominated last week. Led by defensive tackles Jonathan Allen and Daron Payne and pass rusher Montez Sweat, the Commanders are tied for fourth in the league in sacks with 19.

KEY INJURIES: The Packers activated WR Sammy Watkins (hamstring) off injured reserve and listed him as questionable after he missed the past four games. ... WR Randall Cobb injured an ankle against the Jets and has been ruled out. ... WR Christian Watson will miss a second consecutive game with a hamstring injury. ... C/G Jason Hanson is also out with a biceps injury. ... Rodgers is expected to play while nursing a thumb injury. ... T David Bakhtiari (knee) and DL Devonte Wyatt (illness) are questionable after being late additions to the injury report. ... Wentz had surgery to repair a broken finger on his throwing hand and is out at least four games after going on injured reserve. ... CB William Jackson will miss a second game in a row with a back injury. ... WR Dyami Brown (groin), TE Logan Thomas (calf) and RB Jonathan Williams (knee) were all ruled out. ... Rookie WR Jahan Dotson, who missed missed the past two games with a sore hamstring, OL Sam Cosmi (finger) and TE John Bates (hamstring) are questionable.

SERIES NOTES: The Packers have won two in a row against Washington and four of the previous six meetings, including a playoff game in the 2016 season. Five of those six games have been decided by 14-plus points ... Green Bay is beginning a string of three consecutive games on the road. ... LaFleur spent four seasons as Washington's quarterbacks coach from 2010-13.

STATS AND STUFF: The Packers have lost two consecutive regular-season games within the same season for the first time since LaFleur took over in 2019. ... Green Bay’s offense has scored a total of 10 points in its past six quarters. ... Rodgers has thrown 16 touchdown passes and one interception in seven career starts (including the postseason) against Washington. ... During LaFleur’s coaching tenure, the Packers are 37-1 when they get at least one takeaway. Green Bay’s defense hasn’t forced any turnovers during the Packers’ two-game skid. ... Packers OLB Rashan Gary has six sacks this season. The only player with more sacks is Pittsburgh’s Alex Highsmith with 6½. ... The Packers have allowed fewer than 100 net passing yards in two of six games this season. ... Green Bay leads the NFL in third down defense. The Packers are allowing opponents to convert on just 26.6% of third down situations. ... The Commanders' victory at Chicago snapped a four-game losing streak. ... They rank last in the league in starting field position. ... Heinicke is expected to make his 17th pro start and 16th with Washington since debuting for the team in the 2020 wild-card round against eventual Super Bow champion Tampa Bay. ... Heinicke threw for 3,419 yards with 20 touchdowns and 15 interceptions as the starter last season after replacing Ryan Fitzpatrick in the first half of the opener. ... Rookie RB Brian Robinson Jr. ran for his first career touchdown in the Bears game, less than seven weeks since being shot twice in the right leg in an attempted robbery. ... WR Curtis Samuel has had 60-plus yards from scrimmage in each of the past three games. ... Allen had his first career forced fumble and interception against Chicago. ... LB Cole Holcomb led the team with 12 tackles last week.

FANTASY TIP: If Packers TE Robert Tonyan still happens to be on your waiver wire, now’s the time to pick him up. If he’s on your bench, you may want to think about starting him. Tonyan had 10 catches — the highest single-game total for a tight end in franchise history — in the loss to the New York Jets. His 90 yards receiving in that game were 8 off his career high.