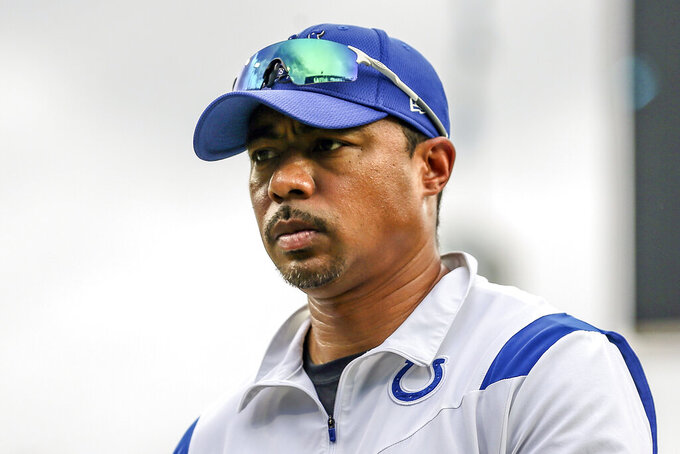 The move comes two days after another loss, 17-16 to Washington, in which the Colts scored just one touchdown and nine days after Reich announced a quarterback change.

Brady, one of the few but expanding group of minority NFL coordinators, was promoted to the post last season when Nick Sirianni left Indy to take the Philadelphia Eagles head coaching job.

“This was an incredibly hard decision, but one I felt needed to be made in the best interest of the team,” Reich said in a statement. “I appreciate Marcus’ commitment to the organization, and he made a significant contribution to our offensive success over the last five seasons. I wish him the best moving forward.”

Reich does not typically speak with reporters on Tuesdays when players are off. He is scheduled to talk again Wednesday, and the Colts canceled their usual Tuesday availability with coordinators.

Indy (3-4-1) has lost two straight and is 2 1/2 games behind Tennessee in the AFC South, but just one game out of playoff position.

The 43-year-old Brady was considered a rising star in the coaching ranks when Indy ranked second in the league in rushing (149.4 yards per game) and ninth in scoring (26.5) last year.

But this season has been a struggle and Reich has made two uncharacteristic moves in two weeks, hoping to get the offense in gear.

He benched starting quarterback Matt Ryan in favor of Sam Ehlinger last week with Ryan in the midst of possibly the worst season of his 15-year career. He was responsible for a league-leading 12 turnovers.

Ehlinger was solid in his starting debut, completing 17 of 23 for 201 yards against Washington. The former Texas star was sacked twice, lost one fumble and did not throw a touchdown pass or interception but came up less than a yard short on a third down scramble with about 3 1/2 minutes to go — a play that could have iced the win.

Instead, the Colts opted to punt and Commanders quarterback Taylor Heinicke took advantage, capping the game-winning drive with a 1-yard TD run with 22 seconds left.

But Brady wasn't the play-caller. Reich has held that job since returning to Indy 2018 so it's unclear how much will change when the Colts visit New England on Sunday.

Indy’s offense is ranked No. 18 in total yards, but has struggled to run the ball most of this season. It has 16 giveaways, tied for the most in the NFL with the Patriots and New Orleans Saints, and ranks 30th in scoring at 16.1 points.

“This morning we relieved Marcus Brady of his duties as offensive coordinator,” team owner Jim Irsay wrote on Twitter. "I wish this good man all the best.

Before joining the Colts, Brady played seven seasons in the Canadian Football League. He started his coaching career with the Montreal Alouettes then spent five seasons with the Toronto Argonauts and won the Grey Cup in 2017 before moving to Indy. Brady also won two Grey Cups as a player after playing at Cal State Northridge.

By Rob Maaddi 15 minutes ago
By Josh Dubow an hour ago
By David Brandt 6 hrs ago
By Teresa M. Walker 6 hrs ago
By Tom Withers 17 hrs ago