Rhule and Judge have history as Panthers face Giants 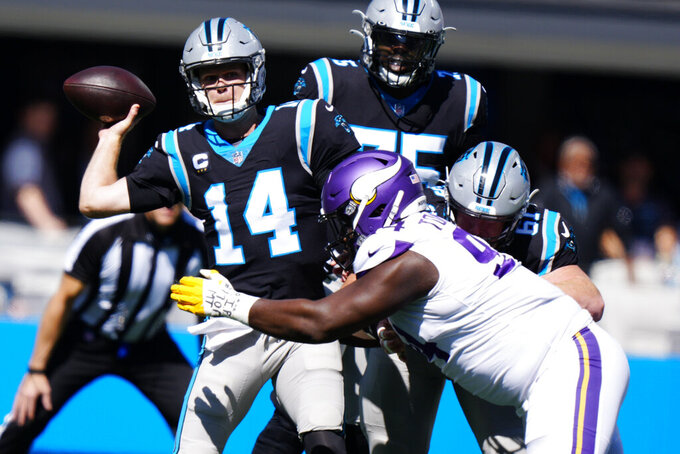 EAST RUTHERFORD, N.J. (AP) — The game betweeen the Carolina Panthers and New York Giants on Sunday matches two struggling NFL teams. There's so much more to the story, starting with the coaches.

Matt Rhule of the Panthers (3-3) and Joe Judge of the Giants (1-5) are going to be linked to the wild coaching searches that followed the 2019 season.

Rhule, a former Giants assistant who was coaching at Baylor, was considered the front-runner to replace Pat Shurmur with the Giants after a 4-12 season. He had an interview set with the team hierarchy in early January.

Panthers owner David Tepper went to Rhule's home in Waco, Texas and beat the Giants to the punch. He offered Rhule seven-year, $9 million annually contract, and got an agreement.

Rhule allegedly offered the Giants a chance to match the deal. However, New York decided to hire Judge, the special teams coordinator for the Patriots.

“I had a chance to have a conversation with them,” Rhule said Thursday. “I was unbelievably flattered, but the truth is it never really got to that point. I got offered the job in Carolina and took it. It just seemed like the right thing for us at the time.”

The storylines extend beyond the coaches.

The game also was supposed to be a matchup of two of the NFL's best running backs: Christian McCaffrey of the Panthers and Saquon Barkley of the Giants. McCaffrey is on injured reserve with a hamstring injury and Barkley has a badly sprained ankle.

The contest also marks the return of former Jets quarterback Sam Darnold and wideout Robby Anderson to MetLife Stadium. Anderson left New Jersey two years ago and Darnold was traded to Carolina in the offseason.

Carolina has lost three games in a row. The Giants are coming off their two worst losses of the season.

“I just want to win, baby,” Giants safety Jabrill Peppers said. “I want to make plays, go out there and win ballgames.”

Rhule said the Panthers will recommit to the running game this week. He thinks they have become too pass heavy and he doesn’t believe that Darnold throwing the ball 40 times per game is the formula for success. He wants at least 30 rushing attempts as the team looks to “find an identity” without McCaffrey. The halfback has missed the last three games with a hamstring injury.

Rookie running back Chuba Hubbard is expected to carry the load.

“We have ran the ball well, but we have not been committed enough to running it — and that’s going to change, I can tell you right now,” Rhule said.

Injuries have caused the Giants to change their line in some way every game this season. With LT Andrew Thomas going on injured reserve this week with foot and ankle injuries, the line will change again. Expect Nate Solder or Matt Peart to replace Thomas, with the other starting on the right side. Billy Price and Will Hernandez probably will start at center and right guard, respectively, for the sixth straight week. The left guard will either be Matt Skura for the fourth straight week or Wes Martin. Judge said Corey Cunningham will rotate at both tackles in the game.

The Panthers are eager to do anything to generate a pass rush. They had 14 sacks in the first three games, but only two in the last three outings.

Panthers defensive end Brian Burns said opposing teams have been keeping an extra player in to protect the quarterback in recent games. Teams also have used three-step dropbacks and quick releases to reduce the sacks.

“The (Vikings) put a tight end and a receiver on both sides usually when they were about to pass the ball,” Burns said. “They were really double-chipping frequently throughout the game. Just putting guys in our way just to mess with our eyes or whatever to slow us down.”

Giants coordinator Pat Graham got on his defense before the Rams game and asked them to respond. While he said the group played hard, opponents have been shredding the unit.

Quarterbacks are hitting 74% of their passes and the Giants have given up 44 and 38 points the last two games. The offense has helped opponents with turnovers.

“Still stuff to clean up, whether it’s the run game, the pass game, all that stuff in all facets – coaching as well, in terms of on me,” Graham said. “I’m never complaining about the effort. I thought there were flashes. There were flashes and we’ve got to build on that for this week.”

Anderson has been a major disappointment since signing a three-year, $37.5 million contract extension this summer. He has failed to develop a chemistry with Darnold, which is perplexing considering they played together for two seasons with the Jets.

A year ago quarterback Teddy Bridgewater targeted Anderson 51 times in the first six games and he caught 40 catches for 566 yards and one touchdown. Through six games this year Anderson has been targeted 40 times by Darnold and has 15 receptions for 190 yards and two touchdowns.