Rhule feels Panthers are 'close,' even as losses mount 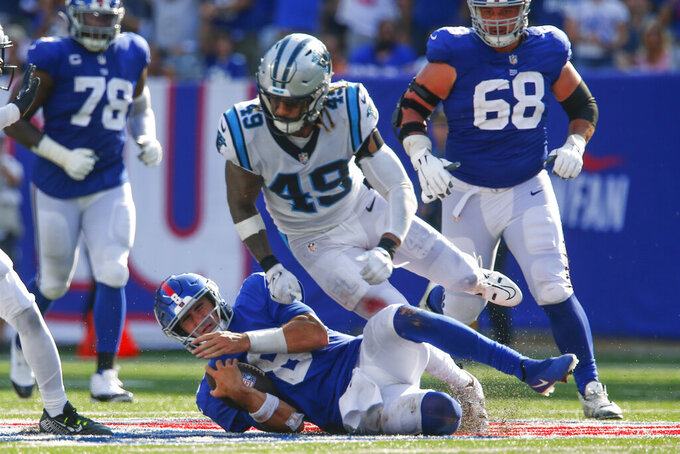 New York Giants quarterback Daniel Jones, bottom, slides after running for a first down during the second half an NFL football game against the Carolina Panthers, Sunday, Sept. 18, 2022, in East Rutherford, N.J. (AP Photo/John Munson)

CHARLOTTE, N.C. (AP) — Matt Rhule believes the Carolina Panthers are close to getting over the hump.

But in a league where there’s an ultrafine line between winning and losing, the Panthers continuously find themselves on the losing end — and the third-year coach could be running out of time to rectify the situation.

The Panthers (0-2) have now lost nine straight dating to last season, the longest active losing streak in the league. Rhule is 10-25 as the head coach since leaving Baylor for a six-year, $62 million contract. There is growing pressure each week from the fanbase to win now and avoid a fifth straight losing season.

“We’re close. I believe that with all my heart,” Rhule said following Carolina's 19-16 road loss to the New York Giants. "We’re so close coming down the stretch, but we haven’t found a way to get it done. And that’s that’s my job to help us get over that — that last hump. It’s the hardest part and we haven’t done it yet.”

Panthers owner David Tepper told reporters in reporters in April: "I believe in Matt Rhule, and he has my full support.”

Tepper surely doesn’t want to swallow the last three-plus seasons of Rhule’s contract if he doesn't have to, but his support could be tested if the Panthers continue to lose games — and the fanbase.

The good thing for the Panthers is they aren't getting blown out.

Both losses have come after yielding long field goals late in the fourth quarter — a 58-yarder vs. the Cleveland Browns in Week 1 and a 56-yarder against the New York Giants on Sunday. That's a sign they're competitive.

But the question is when will they start winning?

Baker Mayfield said now the Panthers have to overcome the “mental hump” of the 0-2 record.

“Eliminate our own mistakes and just go play," he said. “We put in the work, we deserve to have fun on Sundays and go execute.”

The Panthers' running game got on track against the Giants as they racked up 146 yards on 22 carries with Christian McCaffrey posting his first 100-yard rushing game since 2019. McCaffrey had a 49-yard burst and the team averaged 6.3 yards per carry. Look for the Panthers to lean more heavily on McCaffrey moving forward.

Third-down passing. Mayfield has been mediocre at best so far for Carolina, and has been plagued by batted balls, sacks and inaccurate passes. But perhaps the biggest issue is Mayfield’s struggles on third down, where he is just 7 of 14 for 54 yards with one interception and no touchdowns. Overall, the Panthers have converted just 26% (6 of 23) of their third down opportunities.

Outside linebacker Frankie Luvu was all over the field Sunday with 10 tackles, including four for a loss. He also broke up a pass, although he did drop a potential interception. Still, Luvu has done a good job so far filling in for Haason Reddick, who left to join the Philadelphia Eagles as a free agent after his second straight 10-sack season. He's fast and he has a nose for the ball.

The Panthers drafted Terrace Marshall in the second round last year, signed Rashard Higgins as a free agent and recently traded for Jacksonville's Laviska Shenault — but none of the wide receivers are seeing much action.

Shenault has been inactive twice, Higgins hasn't played a down at receiver and Marshall has only played six plays. The Panthers' wide receiver rotation has almost exclusively included D.J. Moore, Robbie Anderson and Shi Smith. However, Rhule acknowledged Monday that has to change. “We've got to play more guys,” he said.

Panthers cornerback Donte Jackson and defensive tackle Bravvion Roy both are dealing with hamstring injuries and were scheduled to have MRIs. Jackson said in the locker room Monday he feels fine and expects to play Sunday against New Orleans.

0 — The number of takeaways for the Panthers' defense this season.

The Panthers are home for the next three Sundays against New Orleans, Arizona and San Francisco. Normally that would be a good thing for an NFL team, but the Panthers have lost seven in a row at home. In fact, their last win at Bank of America Stadium was Sept. 19 of last year.