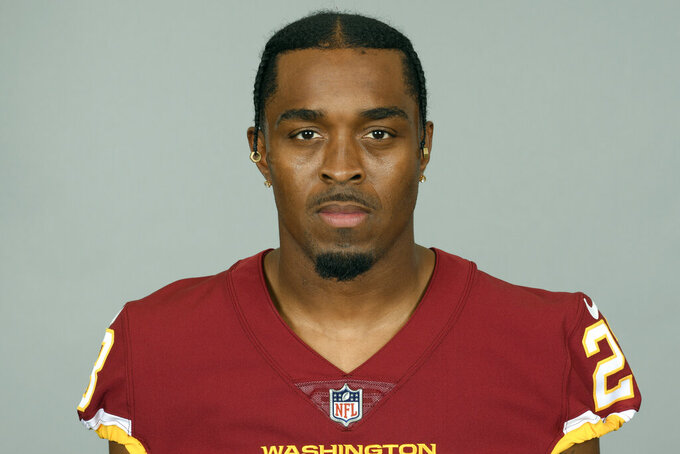 FILE - This is a 2021 photo of William Jackson III of the Washington NFL football team. Washington has been practicing without receiver Curtis Samuel for the balance of training camp and without cornerback William Jackson for the past week. Samuel and Jackson were the team's highest-priced free agent additions. (AP Photo/File)

ASHBURN, Va. (AP) — Washington is taking the field late in training camp without almost $75 million worth of signings.

Receiver Curtis Samuel has missed the balance of camp and cornerback William Jackson has been out for the past week, putting the team in a tough spot with its two biggest-money additions on the sideline.

“Do I want them out there? Absolutely,” coach Ron Rivera said. “Am I going to fret about it? No, because the truth of the matter is you play with who’s available and that’s all you can do.”

Rivera said Wednesday he's “pretty optimistic” Samuel and Jackson will be back on the field for team drills next week. With final cuts to the 53-man roster due Aug. 31, Washington could really use those two players the coaching staff is counting on to contribute this season.

Jackson signed for $40.5 million and Samuel $34.5 million over three years. Jackson was brought in from Cincinnati to upgrade the secondary, while Samuel is plenty familiar with Rivera and offensive coordinator Scott Turner from their time together at Carolina.

Samuel had been hampered by a groin injury since offseason team workouts, opened camp on the physically unable to perform list, and also spent time on the NFL's COVID-19 reserve list. Samuel is being monitored for progress daily.

“Curtis will continue to do what he’s doing," Rivera said. "We’re ramping him up gradually.”

One area Samuel is falling behind Terry McLaurin and the other receivers is chemistry with quarterbacks Ryan Fitzpatrick and Taylor Heinicke.

“With Curtis, when he’s ready to ramp up and go, he will be," Fitzpatrick said. “But right now, to me, it’s great work whoever’s out there because it’s going to happen. You’re not going to go the whole year without having injuries.”

Rivera said Jackson was dealing with a quadriceps injury earlier in camp. Defensive coordinator Jack Del Rio said Jackson was fitting in well before the injury, but he along with Samuel now face an uphill climb to get ready for the season opener Sept. 12 against the Chargers.

Jackson's absence has opened the door for journeyman Torry McTyer and converted safety Troy Apke to impress in camp and preseason action. That's all well and good; Rivera just wants Samuel and Jackson to be ready when the games count.

“We’re going to play with the guys that are available,” Rivera said. "I’d love to have everybody ready and available for when it comes to Game One.”