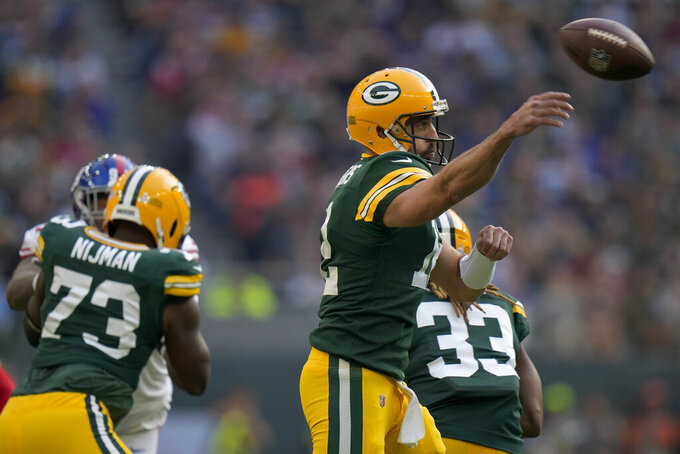 Green Bay Packers quarterback Aaron Rodgers (12) passes the ball during the first quarter of an NFL game between the New York Giants and the Green Bay Packers at the Tottenham Hotspur stadium in London, Sunday, Oct. 9, 2022. (AP Photo/Alastair Grant)

However the reigning MVP still expects to play Sunday after hurting his thumb on an unsuccessful desperation pass attempt that ended their loss to the New York Giants in London.

“The thumb’s all right,” Rodgers said. “It was nice to get a day off today, do a little rehab. But I’ll try and get back out there and practice tomorrow and see how it feels and be fine by Sunday, I’m sure.”

Green Bay had the ball on its 36-yard line on the final play against the Giants when Rodgers attempted to throw a deep pass into the end zone. Before Rodgers could make the throw, Oshane Ximines hit him to knock the ball loose and seal New York's come-from-behind 27-22 victory.

“In the moment, you’ve still kind of got the adrenaline going,” Rodgers said. “Once the adrenaline wore off and got on the bus, got back to the airport, got on the plane, I knew it was banged up a little bit. But it’s gotten better every day.”

When he announced that Rodgers wouldn't practice Wednesday, Packers coach Matt LaFleur said that “I don’t think we have much concern as far as game day.”

Rodgers said he's been working on his grip all week to see how it's progressing.

The four-time MVP says he's gotten accustomed to these types of injuries and cited an example from his college career, when he broke his index finger in a 2003 game at Illinois.

“You don’t plan for it, but I was able to play through it and finish the season, and there’s always those things that can happen,” Rodgers said. “A guy goes up to bat a pass down, you might catch a finger here or there. But I’ve banged up most of my fingers on both hands, so I’m kind of used to it.”

Rodgers isn't off to as fast a start as he enjoyed while earning MVP honors each of the past two seasons.

He has completed 67.9% of his passes for 1,157 yards with eight touchdowns and three interceptions while adjusting to life without two-time All-Pro wideout Davante Adams, who's now with the Las Vegas Raiders.

Green Bay's offense failed to score in the second half against the Giants, with the Packers' only points coming when New York took an intentional safety in the closing seconds.

“I expect that typical stretch coming up at some point where we get really hot,” Rodgers said. “Hopefully it starts this week. But I think that’s right around the corner.”