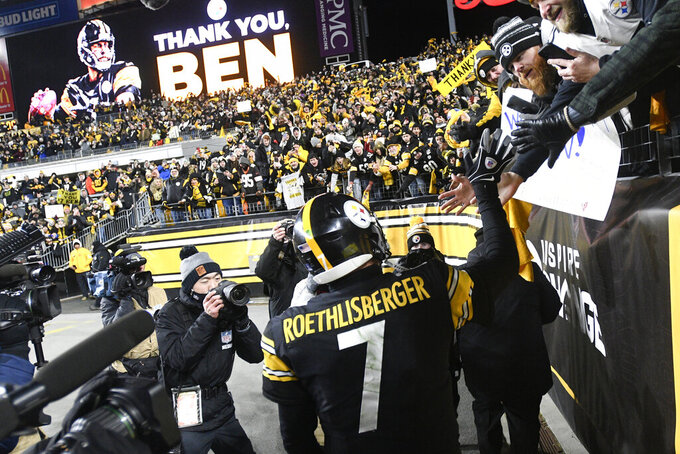 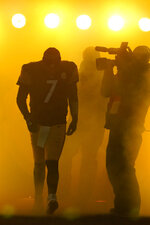 PITTSBURGH (AP) — Ben Roethlisberger acknowledged his emotions were still high in the hours following a 12-point win against Cleveland on Monday night.

The Steelers quarterback insisted Wednesday morning he’s solely focused on Sunday’s regular-season finale at Baltimore, a game that will play a role in determining Pittsburgh’s playoff fate. But the 18-year veteran allowed himself to reflect one more time on his final game at Heinz Field.

“My family and I just felt so much love,” Roethlisberger said. “We were so thankful — from the fans, former teammates, the texts, and all of the many notes that were written on social media. It’s really hard to put into words. Like I said after the game, I wish I could bottle it up and keep it forever.”

Roethlisberger tried his best to soak it in with a victory lap around the stadium after Monday’s win against Cleveland. He also shared a moment with his wife Ashley and the couple’s three children before walking into the tunnel and out of sight.

Roethlisberger said it was special that his children are old enough to be able to remember the night.

“For them to know and understand what’s going on is pretty cool,” Roethlisberger said. “It’s something that I’ll cherish forever and I think they will, too.”

Now, Roethlisberger will play his final regular-season game Sunday at Baltimore, the place where it all began.

During Roethlisberger’s rookie year, Tommy Maddox entered the season as the starter, but he hurt his elbow during a Week 2 game at Baltimore. Roethlisberger, the No. 11 overall pick in the 2004 draft, replaced Maddox and never looked back.

But the rivalry runs deep with the Ravens. And Roethlisberger vividly recalls the battles against Ravens defenses that frequently featured Ray Lewis, Ed Reed, Haloti Ngata, Terrell Suggs and more. The Ravens plan to honor Suggs at Sunday’s game.

“You never walk out of those games feeling fresh,” said Roethlisberger, who is 16-10 against the Ravens. “You can go down their whole list of guys. It was never a lot of fun to play those guys, but I think there’s a lot of respect. It’s never an easy football game.”

It’s a game the Steelers have to win Sunday if they want to keep their playoff hopes alive. If Pittsburgh can sweep Baltimore, and two-win Jacksonville — the NFL’s worst team — can beat Indianapolis, the Steelers will reach the playoffs for a second straight season.

Roethlisberger said the Steelers are concerned only about themselves.

“Our No. 1 focus is on winning the football game because nothing happens if we don’t,” Roethlisberger said. “We’re human, and we’re probably still going to be peeking, but we have to win our football game.”

Roethlisberger, who led the Steelers to three Super Bowls and two championships, is the franchise leader in just about every major statistical passing category. He’s also fifth in NFL history in yards passing, fifth in regular-season wins and eighth in touchdown passes.

Last Monday, the 39-year-old Roethlisberger won his 92nd game at Heinz Field and led the Steelers to their eighth win of the season. It’s the 18th straight season that Pittsburgh finished with a winning record.

But it’s not over yet, and Roethlisberger wants to get the Steelers into the playoffs one last time at the helm. Roethlisberger admits the competitive itch may return in the summer, but he already has a way to combat the lure of another NFL season.

“I’ve already talked to some guys, but I’ll spend time talking to former teammates, former NFL quarterbacks and people I call friends,” Roethlisberger said. “That’s when it will probably sink in the most, when it’s time for training camp. But I’m sure I’ll be pretty busy being a dad and being a husband at the time.”