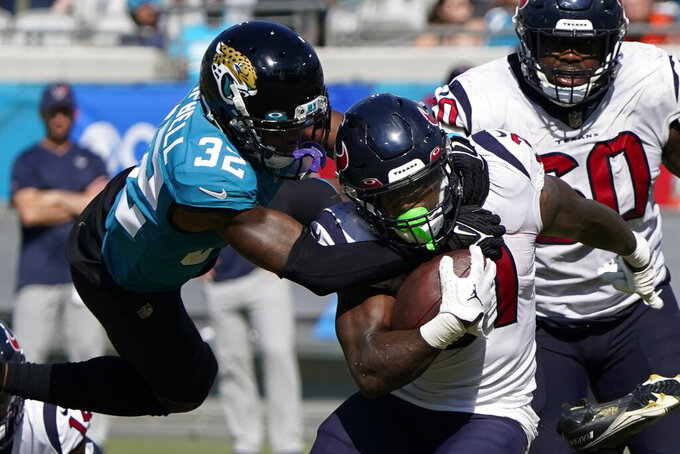 HOUSTON (AP) — Running back Dameon Pierce has been Houston’s best player all season, so it was only fitting that the rookie would lead the Texans to their first victory.

Pierce ran for 99 yards and a game-clinching touchdown as the Texans extended their winning streak against the Jaguars to nine games with a 13-6 victory Sunday.

The fourth-round pick from Florida was asked last week what he considered to be his best quality as a runner. After thinking for a few seconds, Pierce answered.

“Tenacity,” he said. “I’ll never quit. I’ll fight for every yard and try to get every inch I can.”

On Sunday, he perfectly illustrated that mindset on a run in the fourth quarter.

By the time he finished that determined dash he had slipped away from seven would-be tacklers before finally being taken down when Dawuane Smoot grabbed him by the ankle and two other Jaguars jumped on him at the 2-yard line.

He scored two plays later to put the Texans (1-3-1) on top in what was coach Lovie Smith’s first win as the team’s head coach.

Pierce has 412 yards rushing, which is the most by a rookie in franchise history through five games and ranks fourth in the NFL this season entering Monday. It’s the third most by any player in team history, trailing two years by Texans’ career leading rusher Arian Foster, who had 546 in 2010 and 532 in 2012.

Pierce’s performance this season has been a boon to a team that has had one of the worst running games in the NFL for the past two seasons.

He credited his early success to his teammates who have helped him navigate the jump from college to the NFL.

“It takes me a village to groom me in the right direction to be a key factor on this team,” he said.

Houston’s defense did a much better job Sunday that it had through the first four weeks of the season.

The Texans were solid in the red zone, keeping the Jaguars out of the end zone on three trips inside the 20-yard line.

Jacksonville settled for field goals on its first two trips to the red zone before rookie Derek Stingley Jr. intercepted Trevor Lawrence in the end zone on the third chance by the Jaguars.

It was the first career interception for Stingley, the third overall pick in the draft.

The Texans also stopped the Jaguars on each of their three fourth down attempts on a day they allowed their fewest points of the season.

Sunday was the first time Houston had limited a team to fewer than 10 points since holding the Jaguars to three points in a 26-3 win on Nov. 3, 2019.

Quarterback Davis Mills failed once again to get Houston’s passing game going. While he didn’t have a turnover Sunday after piling up four in the past two games, he struggled to make plays and finished with a season-low 140 yards passing.

The emergence of Pierce has made the Texans a run-first team, but Mills will need to play much more consistently if Houston expects to compete with better teams in the upcoming weeks.

Ka’imi Fairbairn had field goals of 50 and 51 yards Sunday to help Houston to the win. It’s the second time in his career that he’s made two field goals that were 50 yards or longer and the first time since the previous meeting with Jacksonville last season.

WR Brandin Cooks entered Sunday’s game with five 100-yard games and five touchdowns in six meetings with the Jaguars. But the veteran was a non-factor this weekend, finishing with a season-low 20 yards on four receptions.

0 — Houston didn’t have a turnover for the first time this season.

Though the Texans finally got their first win, they have plenty of work to do if they hope to dig themselves out of the NFL’s basement this season. They’ll have some time to rest and recover with an early bye this Sunday before hosting Las Vegas Oct. 23.

“We’ve been battling for four weeks, and haven’t been able to finish it,” Smith said. “That’s all we’ve talked about. I know how the guys have been responding behind the scenes. They’ve just (had) belief, faith, that eventually it’s going to get done. But now that we have taken care of that, I’m just anxious to get that second win now.”