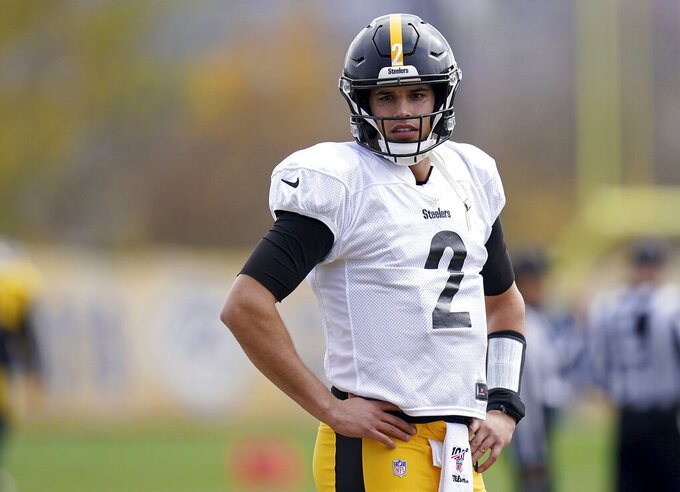 The next seven months give the two Pittsburgh Steelers quarterbacks a chance to shed the weight. For the first time in nearly a generation, the starting gig in the city they play for is up for grabs after Ben Roethlisberger all but confirmed he is retiring after 18 seasons.

And the two players who will get first crack at replacing the likely future Hall of Famer — one (Haskins) a 2019 first-round pick trying to recover from an embarrassing flameout, the other's (Rudolph) pro career to this point defined by a brawl that ended with him getting hit in the head with his own helmet — understand the stakes.

“There's still question marks on my game,” Rudolph said Wednesday. “I want to serve this role and I want to prove myself to my teammates, the guys that I really care about.”

Pittsburgh coach Mike Tomlin stressed in the aftermath of a first-round blowout loss to Kansas City that finished off a wildly uneven 9-7-1 season that “all options” are on the table as the Steelers try to create a path forward without the player that spent nearly two decades as the face of one of the NFL's most consistent franchises.

Maybe, but Rudolph and Haskins will be given every opportunity to prove they can handle being a full-time starter. Rudolph's resume so far is spotty. He's 5-4-1 while filling in for Roethlisberger over the past three seasons and his lone extended appearance this season came in a brutal 16-all tie with then-winless Detroit in which he threw for 242 yards with a touchdown and an interception while struggling with his accuracy.

At least he saw the field. Haskins didn't take a snap during the regular season and spent game days on the sideline in a sweatshirt after being made inactive. The 24-year-old insists it was an experience he needed after his brief but tumultuous time in Washington, which cut him in December 2020 less than two years after taking him with the 15th overall pick.

“Having to play early (in Washington) I never had a chance to learn the NFL game the way it should be done and the way the Steelers wanted done,” Haskins said. “It gave me an opportunity to understand the ‘Steelers Way’ and how they wanted their quarterbacks to operate."

Even if the way Tomlin will ask his quarterbacks to operate going forward will be different than what was asked of Roethlisberger. Pittsburgh's offense during his final seasons was predicated on short, quick throws designed to get the ball out of Roethlisberger's hands in an effort to protect him behind a shaky offensive line.

The game has changed since Roethlisberger took over for an injured Tommy Maddox in Week 2 of the 2004 season. The Steelers play in a division that features one quarterback who can make magic with his feet (Baltimore's Lamar Jackson) and another who can escape pressure when things break down (Cincinnati's Joe Burrow).

Whoever is behind center for Pittsburgh in 2022 will need to be able to move. Maybe not with the quickness of Jackson, but a facsimile of what Burrow does would go a long way to diversifying a playbook that looked awfully stale at times under first-year coordinator Matt Canada.

Whether the issue was the game plan or the personnel that had the Steelers drop into the bottom half of the league in nearly every major category this season is up for debate. Canada's job, at least at the moment, appears safe after Tomlin appeared to offer a tacit if tepid endorsement for giving him another shot at calling the plays.

Neither Haskins nor Rudolph will be confused with Jackson. Yet they also have more life in their legs than the 39-year-old Roethlisberger, a valuable commodity considering the 2022 starting quarterback will be playing behind a line that could look an awful lot like the one that had issues protecting Roethlisberger this season.

Haskins spent most of the season running the scout team during practice, meaning he had to do the occasional Burrow, Patrick Mahomes or Aaron Rodgers impression.

“(Tomlin) is looking for a guy that can move around in the pocket the way young Ben (Roethlisberger) was,” Haskins said.

Yet the job also carries more responsibility than just being able to throw it and being able to run it. Leadership is part of the equation, and both players have work to do on that front.

The scars of Rudolph's infamous run-in with Cleveland defensive end Myles Garrett in 2019 still run deep, part of a bumpy intro to the NFL in which Rudolph was benched for undrafted rookie free agent Devlin Hodges then saw his season end with a shoulder injury.

“I think that's the most adversity I've ever had in a season in my life,” Rudolph said. “It happened within a span of 10 weeks and I think I'm a better man for what happened to me that year. I've been hardened. My skin's been thickened.”

Haskins believes his has too after Washington cut ties with him so quickly. There were concerns about his maturity at the time, concerns he believes he's alleviated during his year in Pittsburgh.

“I definitely feel like I can be a starter in this league,” said Haskins, who went 3-10 in Washington. “I got drafted for that reason. I really believe I have the talent to. I believe I can play with the best of them. I really just haven't put it all together yet. And I know I have to do that if I want to put myself in a position to play."