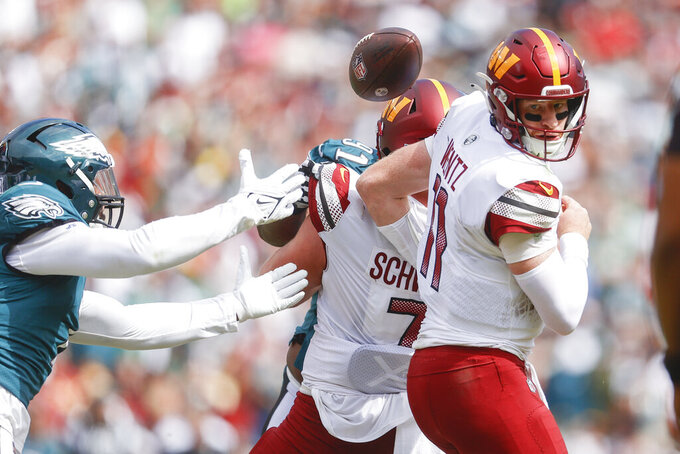 OPENING LINE: Cowboys by 1 1/2, according to FanDuel SportsBook.

TURNOVER DIFFERENTIAL: Commanders minus-4; Cowboys even.

COMMANDERS PLAYER TO WATCH: It’s actually five players, the starting offensive line, after the Eagles sacked Carson Wentz nine times. Nick Martin, brother of Cowboys right guard Zack Martin, could be up next at center if Wes Schweitzer remains in concussion protocol. Given Dallas' NFL-leading 13 sacks, tackles Charles Leno and Sam Cosmi and guards Andrew Norwell and Trai Turner need to be better than they were against Philadelphia.

COWBOYS PLAYER TO WATCH: QB Cooper Rush appears to be in line for another start as Dak Prescott continues his recovery from a fractured thumb. Rush is 3-0 in his career filling for the Dallas star, including the past two weeks after Prescott was injured in a season-opening loss to Tampa Bay. Rush has a chance to be the first Cowboys QB and 27th in league history to start his career 4-0.

KEY MATCHUP: Wentz vs. Dallas pass defense. If the Commanders can do a better job protecting Wentz than they did against Philadelphia, the league's fourth-best pass defense will get a strong test. Wentz is averaging 287 yards for the No. 9 pass offense with seven touchdowns. The Cowboys haven't allowed more than 195 yards passing in a game, and have already faced Tom Brady and Joe Burrow.

SERIES NOTES: Week 4 is the earliest point of a season Dallas has hosted Washington since Monday night of Week 3 in 2011. ... Washington is 13-10 against Dallas in October.

STATS AND STUFF: Commanders RB Antonio Gibson’s 363 scrimmage yards against the Cowboys since 2020 are the most of any player against them in that time. ... Wentz was 3 of 10 for 24 yards passing with two fumbles and one lost in the first half against Philadelphia. He finished 25 of 43 for 211 yards. ... Wentz has 14 touchdowns and four interceptions in eight career starts against Dallas. ... WR Curtis Samuel led the team with seven catches in Week 3. ... DT Jonathan Allen has four sacks in seven career games against the Cowboys. ... LB Cole Holcomb returned an interception 31 yards for a touchdown in Washington’s most recent game against Dallas. ... CB William Jackson is expected to return after missing the Eagles game with a back injury. ... Rush is one of two NFL quarterbacks (Chicago's Virgil Carter, 1968) to lead game-winning drives in the fourth quarter or overtime of his first three career starts. ... WR CeeDee Lamb's go-ahead touchdown catch in the fourth quarter against New York ended a 10-game stretch without a TD. That run included the wild-card loss to San Francisco. ... DE DeMarcus Lawrence tied his career high with three sacks against the Giants. He has 51 1/2 for his career and needs one to pass Pro Football Hall of Famer Randy White on the club's career list. ... The Cowboys have held opponents to 19 points or fewer in each of the first three games, which the club hasn't done since 1974. ... KaVontae Turpin leads the NFL with a 16.3-yard average on punt returns.

FANTASY TIP: Picking a Dallas running back is becoming more difficult to figure out. Ezekiel Elliott and Tony Pollard split carries almost evenly. The two-time rushing champ had 15 for 73 yards against the Giants, while Pollard's 13 carries included the longest run of the season for the Cowboys. The 46-yarder keyed his fourth career 100-yard game (105). Elliott had a short touchdown. The Cowboys have said they wanted Pollard more involved, and he is.