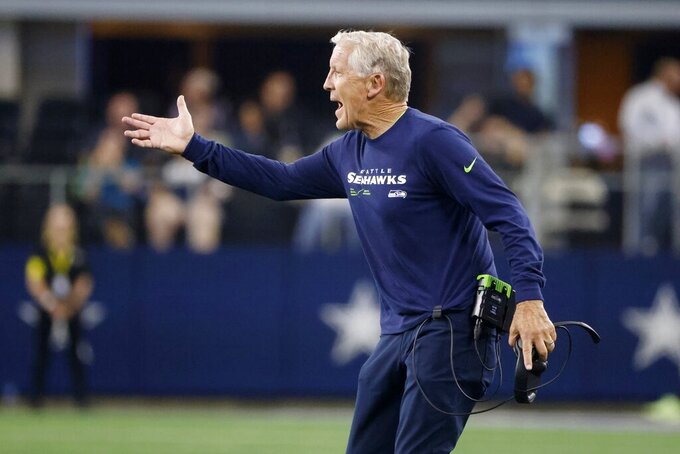 SEATTLE (AP) — A WNBA game would not usually be considered a venue where animosity toward an NFL quarterback would be on display and an indication of what might be coming.

But there it was a month ago during a tribute video to Sue Bird before the final regular-season home game of her career. When Russell Wilson’s face was shown on the video board, the fans of Seattle responded with some unexpected — and rather noticeable — boos.

That was just a small sampling of what Wilson may hear Monday night when he makes his highly anticipated debut in Denver and returns to Seattle with the Broncos and Seahawks meeting to open the NFL season in a made-for-prime time showcase.

The moment Wilson was traded to Denver in March, ending his decade as the leader under center in Seattle, this game was circled. And then the NFL did it the honor of placing it as the conclusion to the first week of the regular season.

A big spotlight. With an even bigger story line.

“I was fortunate to play there for 10 years. I know they’ll be rowdy. I know they will be excited. I know that. It’s ‘Monday Night Football,’ so it’ll be a special environment,” Wilson said. “And listen, I think that I gave my heart and soul every day. I know nothing less. And hopefully it’ll be positive, but at the same time I know we've got a game to play.”

The reception Wilson will receive has become a debated topic because his departure from Seattle wasn’t clean. It was shrouded in a bit of unknown -- how much did Wilson forced his way out and how much were the Seahawks ready to move on?

The answer is that it was a mix of both. Wilson was ready for a new environment and a new challenge. Seattle was ready to begin a rebuild where the quarterback wasn’t the center of the offense, but rather a piece that makes it function.

Wilson’s legacy in Seattle is unmatched. He is the quarterback of Seattle’s first and only Super Bowl championship team. But that likely won’t stop the noise of disapproval that will come his way on Monday.

“You’re either competing or you’re not. I’m leaving it up to the 12s,” Seattle coach Pete Carroll. “It’s game time and we’re going for it, so however they take it, I’ll follow their lead on that. I’m not going to be involved with that kind of opportunity to react, so I don’t have to make that decision. We’ll see what happens. But I’m going to leave it up to the 12s. I think they’ll know exactly what to do.”

While Carroll seemed to be in favor of loud raucousness directed at his former quarterback, at least one former teammate wanted Wilson’s time in Seattle to be recognized appropriately.

“I think that Seattle should cheer him on for everything that he’s done, helped bring a Super Bowl to this community, all that different type of stuff. He’s an amazing guy,” Seattle wide receiver Tyler Lockett said.

The replacement for Wilson in Seattle will be Geno Smith to begin the season.

For Smith, it’s his first chance at being the starting quarterback to begin the season since 2014 with the New York Jets. Smith began Seattle’s offseason program as the leader in the competition with Drew Lock and never gave it up, although Lock didn’t play well enough during the preseason to warrant a change in the order.

“I can’t imagine that he’s not in the best position to own the offensive as he’s ever been,” Carroll said of Smith.

While Wilson’s return will be primary focus of the night, it will also be Nathaniel Hackett’s debut as a head coach in the NFL. Hackett was hired by the Broncos after three stints as an offensive coordinator around the league, the last being the previous three seasons in Green Bay.

Hackett’s father Paul was twice a head coach at the college level and was replaced after three seasons at USC by Carroll in 2000.

“I was very excited to come to this organization because of (general manager) George Payton,” Hackett said. “I believed in him. I loved the relationship that we gained throughout the interview process and with his whole support staff.”

Seattle could be starting as many as four members of its rookie class in key positions.

First-round pick Charles Cross and third-rounder Abe Lucas are expected to start at left and right tackle, respectively. Fifth-round selection Tariq Woolen could be in line to start at cornerback due to injuries in the secondary, and fourth-rounder Coby Bryant might be Seattle’s option as the starting nickel cornerback.

While he might not start, pass rusher Boye Mafe is expected to be heavily involved in the rotation of Seattle’s edge rushers. And once healthy following hernia surgery, running back Ken Walker III should be a big part of Seattle’s offense.

Javonte Williams and Melvin Gordon are back to give Denver a 1-2 punch out of the backfield. Only, this year, it’s Williams who will be featured.

Gordon didn’t help his case by skipping most of the Broncos’ offseason program, as has been his habit, after signing a one-year deal.

“I just want to put my best foot forward so when I do go out there, they go, ‘OK, we need to get him out there more,’” Gordon said. “I know I can play and I still have the juice.”