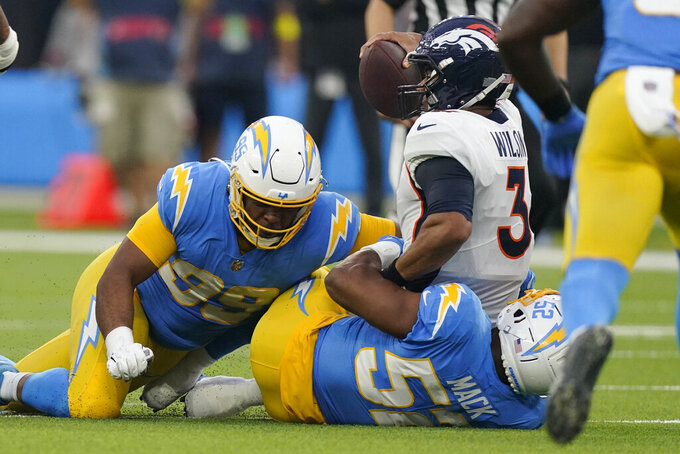 DENVER (AP) — Broncos quarterback Russell Wilson will miss Sunday's game against the New York Jets because of a pulled hamstring, and backup Brett Rypien will get the start.

Wilson was ruled out Saturday, less than 24 hours after coach Nathaniel Hackett said he figured Wilson's playing status would be a game-day decision.

This will mark Rypien's second career start. His other one also was against the Jets, a 37-28 Denver win at the Meadowlands on Oct. 1, 2020, when he threw for two touchdowns and was intercepted three times.

Veteran Josh Johnson will be elevated from the practice squad to serve as Rypien's backup when the Broncos (2-4) try to snap a three-game skid and end a three-game win streak for the Jets (4-2), who have already matched last year's win total.

Rypien is a third-year pro who went undrafted after starring at Boise State, where he went 37-12 as the starting QB. He edged out Johnson in a training camp competition to serve as Wilson's backup.

Rypien took the bulk of the snaps at practice this week although Wilson also got some work in with the starters.

Wilson pulled a hamstring during Monday night's 19-16 overtime loss to the Los Angeles Chargers. That injury came nine days after he received an injection to relieve pain in a muscle near his throwing shoulder.

The only games Wilson has missed as a pro came during his final season in Seattle last year when he sat out three games with a broken finger.

He was traded to Denver in March for a package of players and picks and signed a five-year, $245 million extension with $165 million in guarantees, $50 million of that in the form of a signing bonus.

Wilson and Hackett, who replaced Vic Fangio in the offseason, are off to a tough start together in Denver. Hackett's offense ranks last in the league in scoring and Wilson has thrown just five touchdown passes and been sacked 20 times.