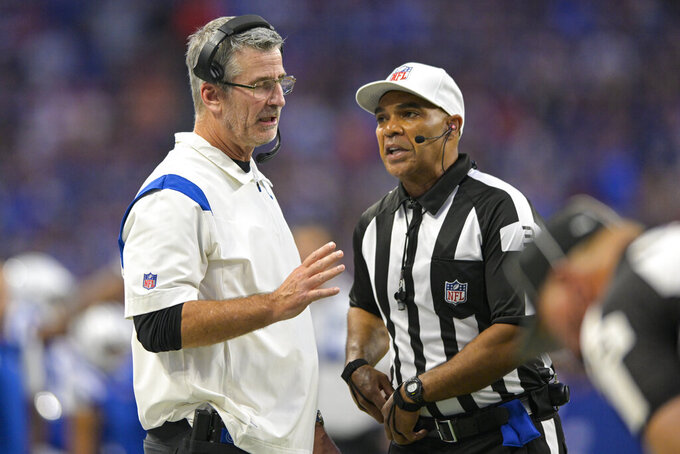 INDIANAPOLIS (AP) — Matt Ryan is eagerly waiting for the next chapter of his football career to begin.

He's settled into a new town, studied a new offense, learned the nuances of all those new teammates and is finally ready to wear a new helmet and uniform for his first meaningful game with the Indianapolis Colts on Sunday in Houston.

At age 37, Ryan still finds himself amped up about another season opener.

“This time of the year, there’s so much buildup, so much buildup — you just want to get to game time,” he said Wednesday. “So, I try and take a deep breath during the week, simmer down a little bit and make sure we get into the routine of getting prepared. It is exciting.”

Even for a quarterback who won an MVP award in 2016 and spent 14 seasons chasing a Super Bowl ring in Atlanta while ascending the NFL's career passing charts.

As different as all this seems to Ryan, it's the same old story for the Colts.

The line of succession began in 2017 when Scott Tolzien replaced an injured Andrew Luck in Week 1. Luck returned in 2018 and led the Colts to the playoffs before suddenly retiring in August 2019 and turning the reins over to Jacoby Brissett. The next season, Indy signed free agent Philip Rivers and when he retired after one season, general manager Chris Ballard acquired Carson Wentz in a trade with Philadelphia.

Now, after dealing Wentz to Washington and subsequently acquiring Ryan from Atlanta, the Colts think they've found a guy who provides the best of all worlds. They view Ryan as a proven leader with a sterling resume who could stop Indy's quarterback carrousel by playing at a championship level for a few more years.

“You’ve all been around him, you can feel it,” Ballard said last week. “He’s got an urgency. He’s got an expectation not only from himself but from others. It’s hard to demand much of others if you’re not putting it out there yourself, which he does. Really, a special, special leader and a special guy. We're fortunate to have him.”

Ryan heads into start No. 223 needing 265 passing yards to become the second-fastest in league history to 60,000 yards. Drew Brees did it in 215 games. Ryan also begins this year with 367 touchdown passes. Only eight QBs have 400 or more.

His next 300-yard game will break a tie with Rivers (73) for fourth-most all-time and his next fourth-quarter comeback would tie Brett Favre (43) for sixth.

But Ryan, who also ranks among the league's top 10 in both categories as well as completions and passing attempts, still feels he and the Colts have a chip on their shoulder.

“I think when you lose that, maybe it’s time to be done,” he said. “I certainly feel like I have a lot to prove, this team has a lot to prove and the games are our opportunities to do that. So, I feel like my motivation is as strong as it’s ever been.”

Ryan lost his final four season openers in Atlanta and the Colts are trying to snap their own eight-game opening day losing streak.

A win over the rebuilding Texans would be a good start and if Indy could add a win at Jacksonville in Week 2, it should be in solid position to challenge Tennessee for the AFC South crown.

Ryan has never been one to look ahead or behind and has often explained he's at peace with how his Falcons career ended.

Instead, he's focused on wrapping up the final chapters of a long, illustrious career by adding the one thing missing from his resume — Super Bowl champion.