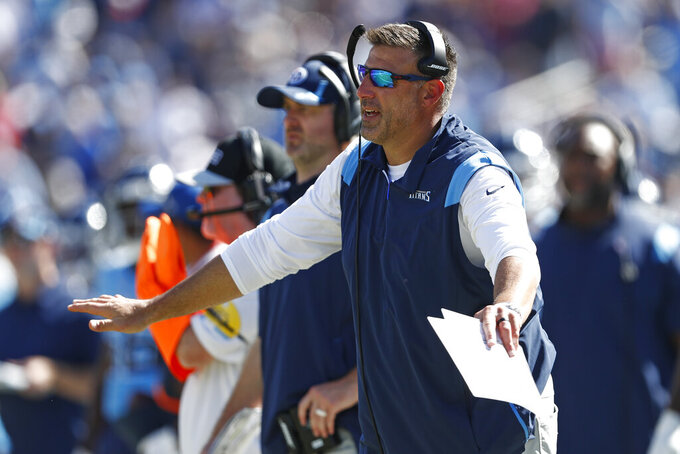 Tennessee Titans head coach Mike Vrabel watches from the sideline in the second half of an NFL football game against the Indianapolis Colts Sunday, Sept. 26, 2021, in Nashville, Tenn. (AP Photo/Wade Payne)

NASHVILLE, Tenn. (AP) — The Tennessee Titans know it's almost impossible to win a game turning the ball over three times.

They found a way to overcome their mistakes for a big win against a team they rarely beat, especially in Nashville.

Ryan Tannehill threw for 197 yards and three touchdowns and the Titans held off the Indianapolis Colts 25-16 Sunday to grab an early tiebreaker in the AFC South.

“I’ll take a win no matter what ...,” said Tannehill, who was intercepted twice. “Find a way to win. Obviously have some things to clean up, but we found a way to win and that’s why we’re here.”

The road team had won the previous five games in this division rivalry with the Titans only 8-16 in Nashville in this series. This was their first home win since Oct. 16, 2017, over the Colts. Tennessee also hadn't won a game turning it over three times since beating Atlanta 20-13 on Oct. 7, 2007.

This time, the Titans (2-1) are the defending AFC South champs with a healthy Derrick Henry. The reigning AP NFL Offensive Player of the Year ran for 113 yards, topping the 100-yard mark for a sixth straight division game.

“You don’t lose many games when you win the turnovers 3-0,” Reich said.

“It just feels like a bad dream, honestly," Colts linebacker Darius Leonard said. "Starting 0-3, first loss here in Tennessee. It just sucks. Got to find a way to win.”

Carson Wentz started after being questionable for Indianapolis with a pair of sprained ankles. He never ran even once, choosing to throw the ball away repeatedly when pressured. He finished with 194 yards passing.

The Colts twice had first-and-goal inside the Titans 9 in the second half. Tennessee's defense, much-maligned in 2020, held the Colts to a pair of field goals by Rodrigo Blankenship. The last came with 10:20 left when Blankenship's 24-yarder pulled the Colts within 22-16.

Tennessee then put the game away, going on a 14-play drive chewing up 7:22 of the clock. Randy Bullock put Tennessee up 25-16 with a 32-yard field goal.

The Colts tried for a final score, but Blankenship's 51-yard attempt was wide right with 57 seconds left. The Titans knelt down for the win.

“For the defense to be playing good in the red zone and force a lot of field goals and let them only score one touchdown, I think that was pretty strong," Titans safety Kevin Byard said. “Definitely encouraging. We're 1-0 in the division, so it's a great day.”

The Titans had plenty of opportunities to blow this game open, but only led 14-10 at halftime because of two interceptions. Darius Leonard picked off Tannehill to set up a 9-yard TD run by Nyheim Hines. Kenny Moore II picked off the second, and the Colts got a 43-yard field goal by Blankenship as the first half expired.

Tannehill threw a 6-yard TD pass to Chester Rogers against his old team and found Westbrook-Ikhine on an 18-yard TD — the first of the receiver's career.

Henry also caught a pass from Tannehill under pressure and finished off a 14-yard play with Leonard bouncing off him in the second quarter.

Reich said he never thought of giving Wentz a week or two to heal up his ankles, though it was a game-time decision on whether the quarterback would start. Reich said Wentz's ankles did affect play-calling a bit with the quarterback understanding his limitations.

“We felt like him at whatever 70 percent or 80 percent, whatever he is, is our best option to beat a very good football team on the road,” Reich said.

Titans linebacker Bud Dupree was active but stayed on the sideline not playing a snap. Vrabel said Dupree was available only in an emergency. The Titans are trying to manage Dupree as he returns from the ACL he tore last December with Pittsburgh.

Ola Adeniyi, who had a key sack in overtime last week in Seattle, finished with 1 1/2 sacks.

Colts defensive end Kwity Paye was ruled out in the first quarter with an injured hamstring. All-Pro left guard Quenton Nelson hurt his right ankle early in the second quarter and was carted to the locker room. He didn't return and was replaced by Chris Reed.

Cornerback Khari Willis was announced as having cramps in the fourth quarter, but Reich said it was a groin injury. Reich also said cornerback Rock Ya-Sin hurt an ankle.

Pro Bowl WR A.J. Brown hurt a hamstring early and was ruled questionable. But he came out of halftime in shorts and a T-shirt. Titans rookie outside linebacker Rashad Weaver was carted to the locker room late in the third quarter after not putting any weight on his right leg. Weaver was on crutches with his foot wrapped and got a ride from a cart from the locker room out of the stadium.

The Titans start a two-game road swing at the New York Jets next Sunday.