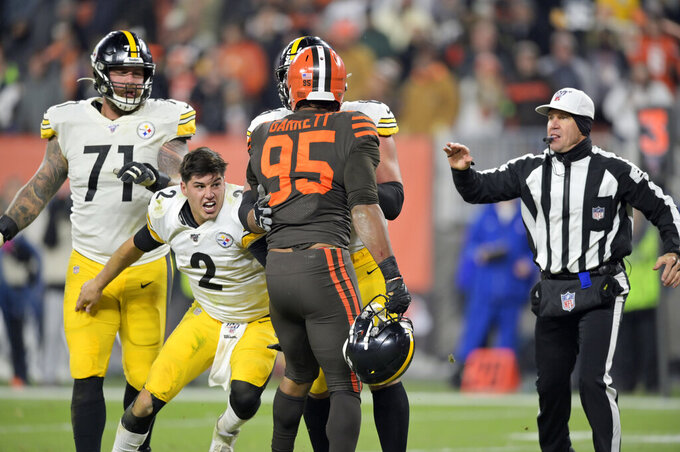 With a blinding moment of anger, the former No. 1 overall draft pick lost his composure, jeopardized Cleveland’s revived season and perhaps tarnished his image — forever.

The sack specialist took himself down. And probably the Browns with him.

Garrett was suspended indefinitely on Friday by the NFL, which acted swiftly and strongly in handing down its punishment hours after the edge rusher pulled off Pittsburgh quarterback Mason Rudolph’s helmet and used it “as a weapon” in a frightening moment that sent a shock wave through the league.

The soft-spoken Garrett, whose outside interests include poetry and paleontology, won’t play again this season — or in the playoffs — and it’s not clear when he’ll be allowed to return.

It’s a stunning setback for Garrett and the Browns (4-6), a talented squad which had finally gained some positive momentum during a strange season now experiencing the most bizarre twist yet.

They’ve won two straight and with a favorable upcoming schedule — Miami and Cincinnati twice — the playoff talk that had been muted by a four-game losing streak had been renewed.

Garrett changed that. Not the impact he wanted to make.

“It’s tough. He was playing like a possible Defensive Player of the Year candidate and that is what I think everyone knows him as,” Browns guard Joel Bitonio said. “He’s a guy that gets after the quarterback, plays the run well. He is a great player. It is tough. Anytime you lose a guy to injury, to suspension or to anything of that nature, it is something that you have to try and fill that spot.

“It’s tough when you lose your best defender.”

Garrett’s implosion came on the night the Browns played their best defensive game, holding the Steelers to seven points and 236 yards. The Browns have been waiting for the pieces to fall into place, and just when it looked like they were, a monstrous distraction.

The Browns, who are trying to end the league’s longest playoff drought, will also be without defensive tackle Larry Ogunjobi next week. He was suspended one game for shoving Rudolph. Also, safety Morgan Burnett suffered an apparent serious Achilles injury and Olivier Vernon, who plays on the opposite side from Garrett, remains out with a sprained knee.

“It’s hard, but I think we have the men in the room to accept the challenge,” coach Freddie Kitchens said. “There will not be any excuses. We will have 11 out on the field, and those 11 will be expected to do their job.”

Garrett will lose $1.14 million in salary and he was fined an undisclosed amount, adding to the $50,000 bill he rang up earlier this season with several personal fouls. He’ll also be required to meet with Commissioner Roger Goodell before his reinstatement is considered.

Garrett’s violent outburst resulted in him receiving the longest suspension for a single on-field infraction in league history. Tennessee’s Albert Haynesworth was suspended five games in 2006 for yanking off Dallas center Andre Gurode’s helmet and kicking him in the face.

Now, Garrett finds himself in notorious company, lumped in with other athletes who have come unglued.

“I made a terrible mistake,” Garrett said in a statement. “I lost my cool and what I did was selfish and unacceptable.”

Garrett apologized to Rudolph, his teammates and fans, adding “I know I have to be accountable for what happened, learn from my mistake and I fully intend to do so.”

It was all so avoidable. The Browns were seconds away from beating the rival Steelers for just the seventh time in 41 games since 1999 when things got out of control.

With no chance at rallying to win, Pittsburgh, which lost two wide receivers to concussions from helmet hits by Browns defensive backs, was still trying to move the ball when Rudolph completed a short pass and was dragged down by Garrett. The two players wrestled on the ground and Rudolph unsuccessfully tried to pry Garrett’s helmet off.

Garrett got his hands on Rudolph’s black-with-gold striped helmet and as the two tussled near the end zone, the 6-foot-4, 270-pounder swung the 6-pound helmet at Pittsburgh’s second-year quarterback, who suffered a concussion earlier this year. The bottom part of the helmet connected with Rudolph’s head, a glancing blow that could have been so much worse.

The damage to Garrett might be harder to see.

Kitchens met with Garrett, who showed remorse while apologizing to teammates. Kitchens likened Garrett’s behavior to a family member who needs love.

Kitchens said his message to Garrett was not to let his actions define him as a person or player.

“Myles is to understand that the ball is in his court on how he responds to this,” Kitchens said. “It’s up to him on showing people and showing the National Football League that that is not who he is. ... He just lost his cool. He lost his composure. A terrible mistake, and sometimes things like that carry on with someone. If the person puts enough time into it, he can make amends.

“This will never be like it never happened. But people understand that that is an outlier of Myles Garrett and not the norm.”