Safety Delpit eager to make up for lost time with Browns 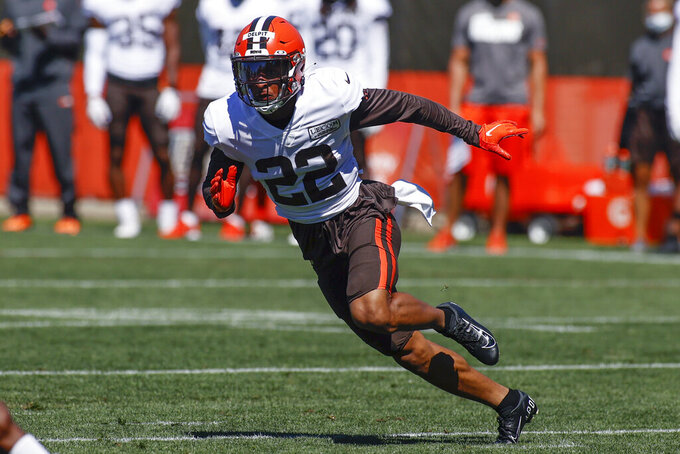 FILE - In this Wednesday, Aug. 19, 2020 file photo, Cleveland Browns safety Grant Delpit runs through a drill during practice at the NFL football team's training facility in Berea, Ohio.Grant Delpit had mixed emotions during the Cleveland Browns’ breakthrough 2020 season. The rookie safety from Louisiana State was under contract, but didn’t necessarily feel like he was part of the team after rupturing his right Achilles during training camp. (AP Photo/Ron Schwane, File)

The second-round pick from LSU was under contract, but didn’t necessarily feel like he was part of the team after rupturing his right Achilles during training camp.

“It was good and bad at the same time because we were winning, but I wasn’t playing,” Delpit said Wednesday on a conference call. “I had to keep my mind very positive all the time because I could have easily been depressed if I thought about it.

“I guess I’m glad it happened while I was young, so I can have my whole career in front of me.”

Delpit received the Jim Thorpe Award as the top defensive back in college football in 2019, playing a significant role as the Tigers captured the national championship. The Browns subsequently drafted him with the No. 44 selection, fully expecting him to start right away.

A non-contact injury, however, changed those plans. Delpit blew out his Achilles while backpedaling on the practice field last Aug. 24, requiring major surgery within the week and weakening Cleveland’s secondary throughout the season.

“I thought I ran into something behind me like a golf cart, that’s how bad it hurt,” the 22-year-old Delpit said. “It’s a crazy injury. Just crazy. I never thought about my Achilles and what it was used for before, but I figured out pretty quickly what had happened once I felt that pain.”

The 6-foot-2, 213-pounder plans to make up for lost time — and be medically cleared — when the Browns open camp in front of an expected capacity crowd at their suburban team headquarters July 27.

“I got to sit back and see what goes on behind the scenes while I was rehabbing, and watch the games from a fan’s perspective, which I hadn’t done since I started playing,” Delpit said. “Seeing our success last season was something.

“Now, we have high expectations as a team and I know what I can be. Hopefully, we all stay healthy because the sky is the limit this season.”

Defensive coordinator Joe Woods has a clear idea what he wants from Delpit as part of a three-safety rotation. The Browns added Rams co-captain John Johnson III as a free agent and return Ronnie Harrison at the position.

Johnson’s leadership and skills represent a major upgrade, while Harrison and Delpit are viewed as playmakers on a defense that had the 10th-lowest interception rate in the NFL. Cleveland parted ways with Karl Joseph and Andrew Sendejo after the season.

“I’m on the back end of my rehab, just trying to get rid of the annoying pain,” said Delpit, who claimed he reached 18 miles per hour running on a treadmill in March. “It’s been a long process, but I feel better every day.

“I know they drafted me for a reason and I’m going to get it done. I’m ready to give the fans what they want.”