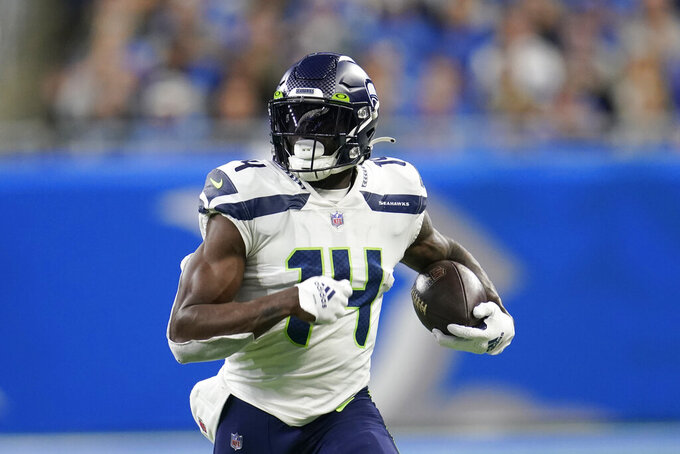 NEW ORLEANS (AP) — Saints running back Alvin Kamara is having trouble recognizing his own team lately.

New Orleans (1-3) has fumbled, stumbled and fouled its way through a three-game losing streak. The Saints — who haven't had a losing season since drafting Kamara in 2017 — are trying to clean up their act before hosting Seattle (2-2) on Sunday.

“We’ve been kind of killing ourselves,” said Kamara, who had a fumble of his own that was returned for a score in a loss at Carolina two weeks ago. “We’ve beaten ourselves every game. … That’s not something that we’re characteristically known for.”

The Saints lead the NFL in turnovers with 11. Their 8.5 penalties per game is the second most in the league.

Kamara, an offensive captain, and other team leaders have been trying to make sure they don't tolerate any more sloppiness.

When there's a turnover, penalty or other mistake in practice “and we don’t say (anything), it ends up happening on Sunday — and it’s not like we can re-do it,” Kamara said. “You end up losing. And that’s what happened.”

Both Seattle and New Orleans are in a season of transition.

The Seahawks traded quarterback Russell Wilson to Denver in the offseason. The Saints are in their first season since the retirement of coach Sean Payton, who's been replaced by his former defensive coordinator, Dennis Allen.

The Saints are also just two seasons removed from the retirement of quarterback Drew Brees, the franchise's all-time leading passer.

Seattle has had reasons to be encouraged lately. New starting QB Geno Smith, who languished earlier in his career with the New York Jets, is completing 77.3% of his passes. He also has been an effective scrambler.

“Everybody kept writing him off and he just never had a fair shot to just be who Geno Smith really is,” Seahawks receiver DK Metcalf said. “We are all seeing him come into his own and be a quarterback leading a franchise.”

The Seahawks' defense has been a liability, ranking 31st. Coach Pete Carroll said the unflattering numbers stem from giving up big plays — something he expects to fix.

“We are going to be cleaner and sharper and consistent,” Carroll said. “We should be off to a better start than this, but you can see the potential.”

Similarly, Kamara said the Saints are far from losing confidence.

“I don’t see any panic in any of these guys, but we definitely have a sense of urgency because we’re used to winning," said Kamara, who expects to return from a rib injury that sidelined him for two of New Orleans' past three games. "We still have a lot of goals we want to achieve right now and it’s not out of reach. It’s just a little blurry right now.”

The Saints have had little stability at QB since Brees retired. Jameis Winston started seven games in 2021 before a season-ending knee injury and the Saints used three other QBs during the rest of that season. Winston returned as starter this season, only to play through nagging back and ankle injuries that finally sidelined him last week. Andy Dalton started in a 28-25 loss to Minnesota last week and has been practicing with the first team again this week.

PLAYER OF THE WEEK

Smith’s completion percentage through four games is the highest in NFL history with a minimum of 125 attempts. And he's not just throwing dump-offs. Smith has pushed the ball downfield to Metcalf, Tyler Lockett and his array of tight ends.

One of Smith’s starts last season when Wilson was injured came against the Saints. Smith was 12 of 22 for 167 yards in the 13-10 loss.

Saints cornerback Marshon Lattimore struggled in the fourth quarter of last week's loss, committing a pass-interference penalty on a deep throw to the goal line and giving up a long catch that set up the Vikings' winning score.

Allen said he expects Lattimore, who'll likely have to cover Metcalf much of the game, to respond well.

“The things we ask him to do and the nature of the position he plays, he’s on an island a lot. Sometimes you get the bear and sometimes the bear gets you,” Allen said. “We’re going to put him in some tough spots and he knows that and he rises to that challenge.”

Seattle punter Michael Dickson could be rusty. For the first time in franchise history, the Seahawks went an entire game without punting in last week's win over the Lions.

That’s 728 games in Seattle history where a punter was needed — until last week.

When Dickson has had to punt, he's shown good pop in his foot. His average of 50.2 yards on nine punts ranks fifth in the league.