Saints' Allen noncommittal on Dalton vs Winston at QB 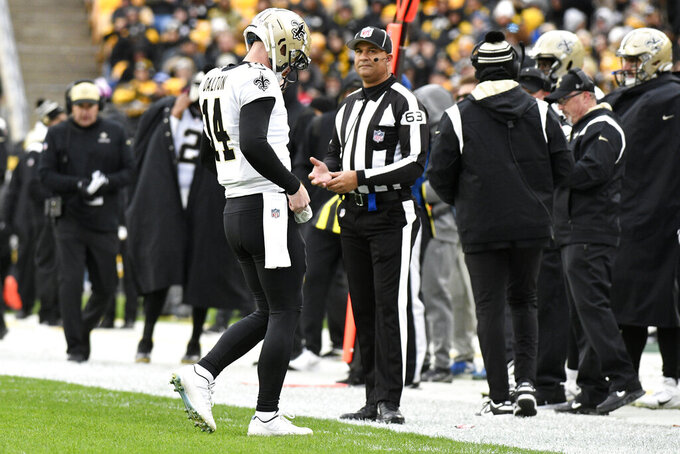 New Orleans Saints quarterback Andy Dalton (14) walks off the field during the first half of an NFL football game against the Pittsburgh Steelers in Pittsburgh, Sunday, Nov. 13, 2022. (AP Photo/Don Wright)

PITTSBURGH (AP) — New Orleans Saints coach Dennis Allen was noncommittal about his quarterback situation after a loss Sunday to the Pittsburgh Steelers, declining to say if Andy Dalton or Jameis Winston will be the starter going forward.

“I know we’re all looking for answers there, but I’m not going to go there right now,” Allen said. “We’ll evaluate where we’re at, and we’ll have a plan for the upcoming week.”

Winston began the season as the starter but struggled with back and ankle injuries, prompting an opportunity for Dalton in Week 4. The former Cincinnati Bengals starter has kept the team in striking distance in an underwhelming NFC South.

Still, the team has been plagued by inconsistency and inefficiency issues that were a problem again in a 20-10 loss to Pittsburgh. Dalton's fourth-quarter interception turned into the clinching touchdown for the Steelers, sending New Orleans (3-7) to its second straight loss.

“At the end of the day, we didn’t make enough plays,” Dalton said. “That’s what it came down to. We weren’t able to sustain drives and that led to us not scoring enough points.”

Dalton finished 17 of 27 for 174 yards and a touchdown, but two late interceptions helped Pittsburgh pull away. The first was a deflection snared by recently activated Steelers safety Damontae Kazee. The second allowed the Steelers to close it out.

“Performance wasn’t good enough, really in all phases,” Allen said. “We fought ourselves back, got back into the game at halftime, felt like we were in a good position, and we really just didn’t do anything in the second half. We have to be better.”

The Saints missed an opportunity against a struggling team to gain ground in the NFC South, where none of the four teams have winning records.