Saints need Bridgewater to validate their effort to keep him 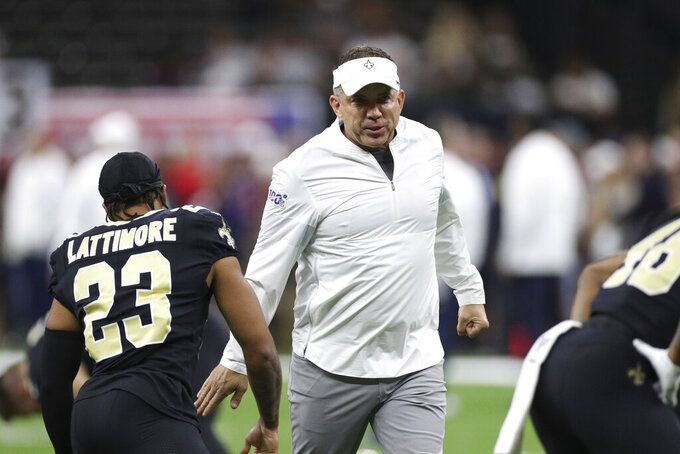 NEW ORLEANS (AP) — Saints coach Sean Payton was on vacation this summer when he found out Teddy Bridgewater's agent was spending time on the same Bahamian island.

So Payton arranged a meeting and Bridgewater wound up signing a $7.2 million contract to return to the club that traded for him in 2018, and be record-setting quarterback Drew Brees backup for at least one more season.

Soon, it'll become apparent whether the effort made and money spent to keep the former Louisville star was worth it.

While the Saints have yet to announce Brees' playing status this week, a person familiar with the situation told The Associated Press, on condition of anonymity, that Brees has a torn ligament in his throwing thumb, has decided to have surgery, and is expected to be out at least six weeks.

Brees was hurt in the first quarter of Sunday's 27-9 loss to the Rams in Los Angeles, and Bridgewater struggled in relief, albeit against one of the top pass-rushing teams in the NFL. Payton was quick to deflect blame from Bridgewater, who went 17 for 30 for 165 yards during the last three-plus quarters of the game.

"The penalties were significant and I thought we didn't block particularly well up front," Payton said Monday after studying video of the game. "We didn't run the ball; we averaged 2 ½ yards a carry. There was pressure on the quarterback pretty consistently and it's going to be hard to win if you play that way in the front."

If Bridgewater starts this week in Seattle, as expected, he'll have the benefit of practicing with the first team all week. And Bridgewater's chances of success could rise further if Seattle's pass rush is not as formidable as the Rams' unit.

Payton has repeatedly expressed confidence in Bridgewater's ability and did so again on Monday.

"We see it on a daily basis. We see his arm strength, his confidence, we see the leadership," Payton said. "We see all those things."

Bridgewater went 17-11 as a starter with his first NFL team, Minnesota, before a career-threatening knee injury in 2015 sidelined him for nearly the next two full seasons. His lone start for New Orleans was a loss, albeit a game at the end of the 2018 regular season in which a number of prominent players were being rested for the playoffs.

Meanwhile, Payton has stated often he believes game plans should take into account the strengths of available players rather than asking players to take on roles that have not demonstrably suited them in the past. So one could reasonably expect Payton to tailor his offense this week to suit those in uniform, rather than trying to attack exactly how he otherwise would have with Brees.

"You're focused on the things you can control," Payton said in regards to guiding his team through the adversity of the past weekend. "This is where you lean on leadership and you get ready to have a good week of practice. It's kind of the nature of our league sometimes. You come in on a Monday, you have a handful of things you're having to address, and that's part of the deal."

The defensive front. Along with having defensive tackle David Onyemata back from a one-game suspension, the Saints' defense simply played better up front against the Rams than in Week 1 against Houston. New Orleans sacked Jared Goff three times and also made four tackles for loss. That went with end Trey Hendrickson's forced fumble that fellow end Cam Jordan recovered and appeared to return for a touchdown — only to have his return negated because of a premature whistle blown by an official who mistakenly thought the loose ball was an incomplete pass.

"We played real well defensively, particularly in the first half," Payton said.

The game was tied at six in the third quarter and the Saints did not fall behind for good until the latter part of that quarter, when their defense was bound to wear down because of the offense's inability to sustain drives.

The offensive line needs to bounce back after a rough showing. Bridgewater was sacked twice and constantly under duress. Several of his better completions were negated by holding penalties. The unit also was thinned by injury as starter Andrus Pete went down with an apparent ankle injury, replaced at left guard by Will Clapp.

Punter Thomas Morstead produced on a busy day, placing three punts inside the Rams 20 and netting an average 40.8 yards on five total punts.

While Marshon Lattimore is unquestionably New Orleans' top defensive back, he has yet to look like a shutdown cornerback. He gave up some big catches to DeAndre Hopkins in Week, 1 and was burned by former Saints receiver Brandin Cooks in Los Angeles for a 57-yard catch and a short TD.

In addition to Brees' thumb and Peat's ankle, receiver Tre'Quan Smith also appeared to have a leg injury in the second half. Linebacker A.J. Klein went to the locker room in the second half. Backup receiver Keith Kirkwood was ruled out with a hamstring injury in pregame warmups. Payton declined to provide any injury updates, as he often does on Mondays.

11 — The number of times the Saints were penalized in Los Angeles, adding up to 87 penalty yards.

The Saints will try to win in Seattle for the first time since 2007 — and will have to do so without the best quarterback in franchise history, and one of the best in the history of the NFL.