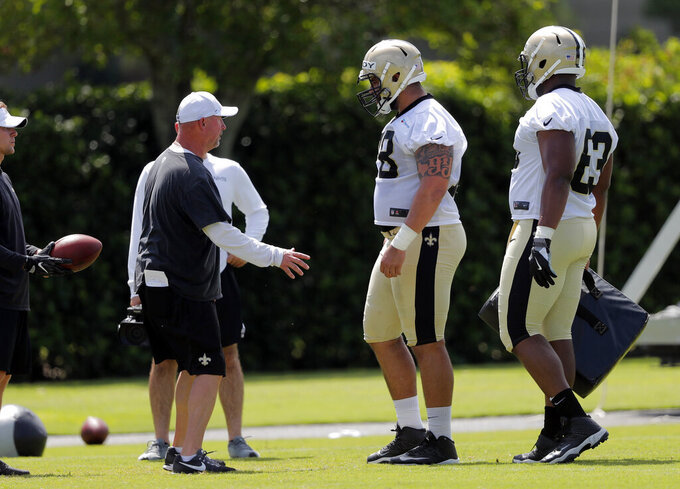 FILE - In this May 23, 2019, file photo, New Orleans Saints rookie center Erik McCoy (78) talks with offensive line coach Dan Roushar during NFL football practice in Metairie, La. Saints coach Sean Payton stopped short of declaring top draft choice McCoy the starting center in the preseason opener. Yet, if recent practices are any indication, the 6-foot-4, 315-pound rookie out of Texas A&M has as good a chance as anyone to open the season snapping the ball to 40-year-old, record-setting quarterback Drew Brees. (AP Photo/Gerald Herbert, File)

Yet, if recent practices are any indication, the 6-foot-4, 315-pound rookie out of Texas A&M has as good a chance as anyone to open the season snapping the ball to 40-year-old, record-setting quarterback Drew Brees.

"We have seen a lot of good things. I like how he has picked things up," Payton of McCoy said after a recent practice in training camp. "He is strong inside. I think each day you see progress."

The Saints, who did not have a first-round draft pick this year, traded up in the second round to select McCoy 48th overall , placing him in line to compete for the position vacated by the retirement of three-time Pro Bowl center Max Unger.

New Orleans also signed veteran free agent Nick Easton to compete for that spot. Young interior lineman Cameron Tom is getting a look, too. But in the past week, McCoy has gotten the most work with the first team.

"At some point we'll list who's going to start, but we're going to see those guys all play," Payton said Wednesday.

Saints offensive line coach Dan Roushar describes McCoy as "a power player" who is "stout at the point of attack."

"He's learning to be better laterally with his range," Roushar added. "The speed of the game is much different for him ... but he's learning a lot."

Easton, a former Minnesota starter, is the most experienced of the candidates, but is also trying to come back from a neck injury that cost him all of last season. His contract is worth up to $22.5 million over four years, but if he does not win the starting job, the Saints will have to decide if it's worth keeping him around as a reserve interior lineman at that same salary.

"I'm here to help — whatever they need me to do," Easton said after Wednesday's practice. "Obviously, you've got to go out and play well, and if you play to the best of your ability, everything's going to take care of itself."

Payton has expressed confidence in Easton's ability to also play guard. But at that spot there is competition from Will Clapp, a 2018 seventh-round draft choice out of LSU who comes a lot cheaper right now.

Tom is entering his third NFL season — all with the Saints, who signed the 6-4, 300-pound lineman as an undrafted rookie out of Southern Mississippi.

"He's stronger right now. I think he's carrying his weight better. He's in the mix inside," Payton said of Tom, who is getting snaps at both center and guard. "He's competing. I've been encouraged. He's smart."

McCoy said his biggest adjustment, "by far," has been learning the technique NFL coaches expect him to master by September.

"In college, you rely a lot on your athletic ability and of course that's what gets you here," McCoy said. "But with these guys, your technique has to be almost perfect."

The fact McCoy was a captain at A&M enhanced his value to the Saints. Centers are routinely responsible for reading defensive alignments and calling out final blocking assignments to fellow linemen just before the snap.

"Look, the center is an important position," Payton said. "Max was a real good leader — a good communicator, and I think Erik can be the same.

McCoy, who estimated he used a shotgun snap at Texas A&M about 80 percent of the time, said he's had little trouble adjusting to the higher percentage of direct snaps in the Saints' scheme.

McCoy sounded far more concerned by what happens after the snap, given the caliber of quarterback he'd be protecting if he wins the job.

"It's Drew Brees back there," McCoy said. "You'll give your life for the guy."