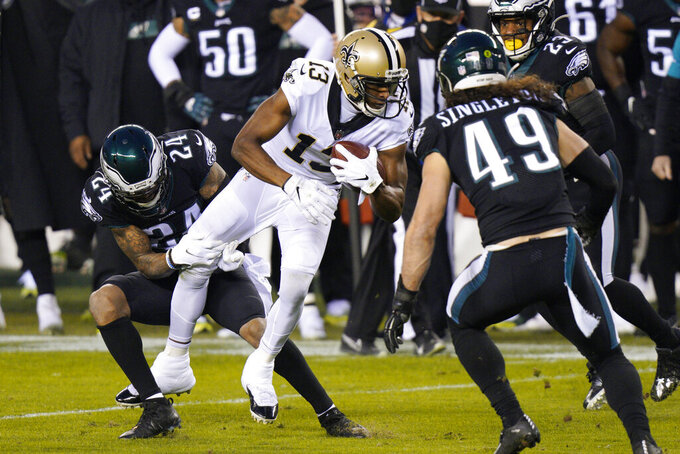 NEW ORLEANS (AP) — The New Orleans Saints placed receiver Michael Thomas on injured reserve on Saturday, a move that allows the Saints to give a healthy player Thomas' active roster spot for their final three regular-season games while resting their star receiver for the playoffs.

Thomas, the 2019 AP Offensive Player of the Year, has been bothered by an ankle injury since Week 1 of the season and already had been ruled out on Friday for Sunday's game against the defending champion Kansas City Chiefs. It will be the seventh time this season Thomas had been scratched from the lineup.

Under current NFL rules adopted in response to the coronavirus pandemic, players may return from injured reserve after as few as three games. The Saints also placed 2019 All-Pro returner Deonte Harris on injured reserve. Harris had been inactive the previous three games because of a neck injury.

Thomas will finish the 2020 regular season having played in seven games, catching 40 passes for 438 yards and no touchdowns. That comes one season after his NFL-record 149 catches for 1,725 yards and nine TDs.

The roster move involving Thomas came as the Saints formally activated Drew Brees from his recent stint on injured reserve because of fractured ribs and a punctured lung. Coach Sean Payton already had announced he intended to start Brees, who missed four games, against the Chiefs.

After Sunday, the Saints conclude the season with a home game against Minnesota on Christmas Day and their season finale at Carolina on Jan. 3.