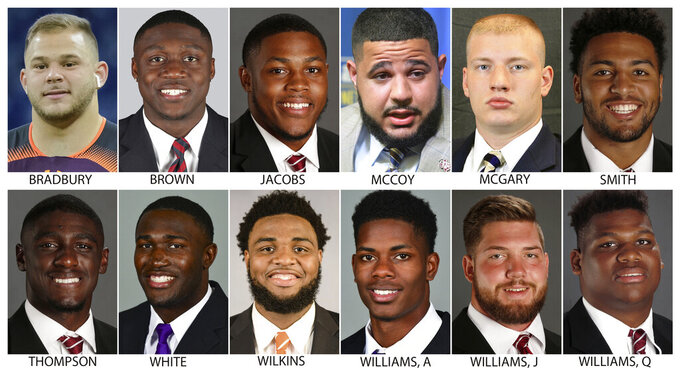 METAIRIE, La. (AP) — The New Orleans Saints moved aggressively to improve their interior blocking in the second round of the draft, trading up 14 spots to take Texas A&M center Erik McCoy with the 48th overall pick they received from Miami.

"We were pretty confident he wasn't going to be available if we stood pat," Saints coach Sean Payton said, noting that 6-foot-4, 303-pound McCoy was New Orleans' top target when the second round began on Friday night. "We think he has been a real good football player in college and our gut, and our instincts tell us the same thing will happen at our level."

The decision to take McCoy came after 2018 Pro Bowl center Max Unger's recent retirement and also came despite New Orleans' signing of free-agent center Nick Easton, who started 12 games for Minnesota in 2017 but missed all of last season because of neck surgery.

Payton said Unger's departure was "one of reasons we brought Nick in, and so we just felt like interior lineman was going to be important for us."

McCoy asserted that his presence on New Orleans' roster gives the Saints a player with a combination of "power, strength and speed that's kind of rare as a center."

"I'm really good at getting to the second level," McCoy said, referring to his ability to block downfield. "But I can also maintain a block and really be a pile-mover on the first level."

The Saints, who had no first-round pick, entered the draft seeking immediate contributors who could provide depth to a team that has its sights set on a Super Bowl run after losing in overtime of last season' NFC title game.

The addition of McCoy holds the potential to improve depth at both center and guard, positions critical to protecting record-setting, 40-year-old quarterback Drew Brees.

"I would say I'm very flexible," McCoy said. "I have a lot more experience at center, but I played guard pretty much every spring I was at A&M. I have a couple of starts there, and I played it in high school."

McCoy joins a couple of other young interior linemen on the roster, including former LSU player Will Clapp and third-year pro Cameron Tom.

McCoy said he has been to New Orleans only once before, but is eager to settle there and start his pro career with an offense that has been among the NFL's best since coach Sean Payton and Brees both joined the Saints in 2006.

"Drew Brees is the best quarterback in the NFL," McCoy said, adding that he also has been impressed by the Saints' running game and offensive line. "It's a winning organization."

McCoy took a redshirt in 2015 before starting the past three seasons for the Aggies. He was a captain in all 13 games for A&M last season and was named offensive MVP at the team banquet after being a top blocker for a unit that gained 6,131 total yards.

"He's a guy that we feel like is going to fit in here," Payton said. "He's tough. He's durable, well liked, a captain — all those things. Those are all part of it. Put all that together, along with (being) a good football player, and we feel like we helped ourselves.'"

Payton added that scouts were impressed by how consistently strong McCoy's performances were against Southeastern Conference competition.

"You get to see him against guys he's going to play against this next level," Payton said. "Some of the better defensive tackles in this draft are coming out of the SEC, so he was very consistent. He's a physical player and smart."

But Payton stopped short of calling him an immediate starter.

"All these guys have a transition to make. It's hard to predict that sometimes," Payton said. "In fairness to the process and the veterans that are here, there's a lot that has to happen for young players to come in" and play right away.

The Saints gave up second round picks this year — 62nd overall — and next year in the trade.

New Orleans also sent Miami a sixth rounder this year in exchange for a fourth-rounder.

New Orleans entered the draft with no picks in the first, third or fourth rounds, having traded those away in 2018 in deals that brought in defensive end Marcus Davenport, cornerback Eli Apple and reserve QB Teddy Bridgewater.

In addition to their newly acquired fourth rounder, the Saints now have one remaining pick in both the fifth and sixth rounds, and two in the seventh.