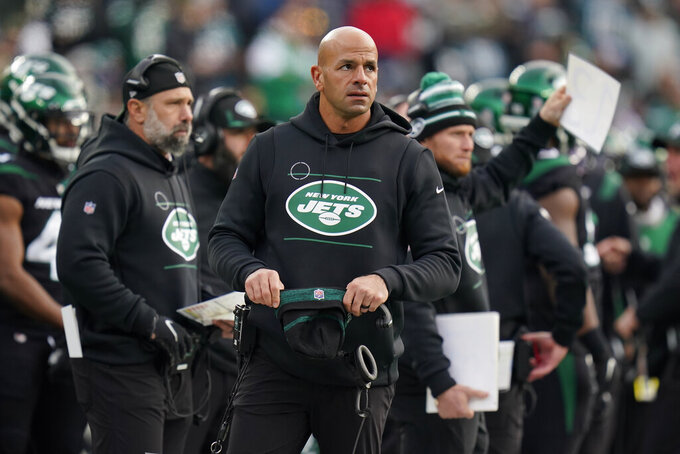 Saleh tested positive last Wednesday after feeling symptoms, but still participated in remote team meetings. He was cleared Tuesday night and thrilled to be back Wednesday at the team's facility in Florham Park, New Jersey.

“It's like the first day of school,” Saleh said with a laugh. “I'm ready to go another 18 weeks.”

The Jets had as many as 25 players — on the active and practice squad rosters, and injured reserve — on the COVID-19 list as of Tuesday, and got back nine after they also cleared COVID-19 protocols. The NFL reduced the isolation time for players who test positive for COVID-19 and are asymptomatic, including unvaccinated players, to five days from 10.

The decision made Tuesday by the league and the NFL Players Association came after the CDC changed its guidelines for those who are asymptomatic, recommending a five-day isolation period and masking over the second five days.

The Minnesota Vikings returned running back Dalvin Cook from the COVID-19 list ahead of their crucial game at Green Bay, but wide receiver Adam Thielen will be out after being placed on injured reserve.

Cook was sidelined for Minnesota’s loss to the Rams last week. He was able to take advantage of the NFL’s new shortened isolation rule, forcing asymptomatic players to sit out only five days, half of the previous requirement. Cook is unvaccinated and declined to discuss that subject when asked Wednesday before practice.

Thielen sprained his left ankle on the opening drive at Detroit on Dec. 5. He returned against the Rams after missing two games, but aggravated the injury twice and barely played in the second half. Thielen must sit out a minimum of three games, meaning the Vikings would have to make the playoffs and win a first-round matchup for him to have an opportunity to play again this season. The 31-year-old Thielen had 726 yards and 10 touchdowns in 2021.

The Vikings (7-8) play the Packers (12-3) on Sunday night. They’re in eighth place in the NFC, one game behind San Francisco and Philadelphia. The 49ers and Eagles currently hold the final two wild-card spots.

At one point last week, the Chiefs had an outbreak that landed 16 players on the reserve list. A few returned in time for their 36-10 throttling of the Steelers on Sunday, and the rest should be available this Sunday in Cincinnati.

Houston added running back David Johnson to the COVID list Monday and placed wide receiver Chris Moore and defensive lineman Ron’Dell Carter on the list Wednesday. Kicker Dominik Eberle, who was signed last week to fill in for Fairbairn against the Chargers, was placed on the practice squad/COVID list Wednesday.

— The Los Angeles Chargers got linebacker Joey Bosa back from the COVID-19 list, along with wide receiver Jalen Guyton, center Corey Linsley, and defensive backs Kemon Hill and Trey Marshall.

— Titans left tackle Taylor Lewan was activated off the reserve/COVID-19 list. That leaves two offensive lineman, and only one starter right guard Nate Davis on the list and nine total from Tennessee's active roster.