Seahawks getting plenty of production from trio of TEs 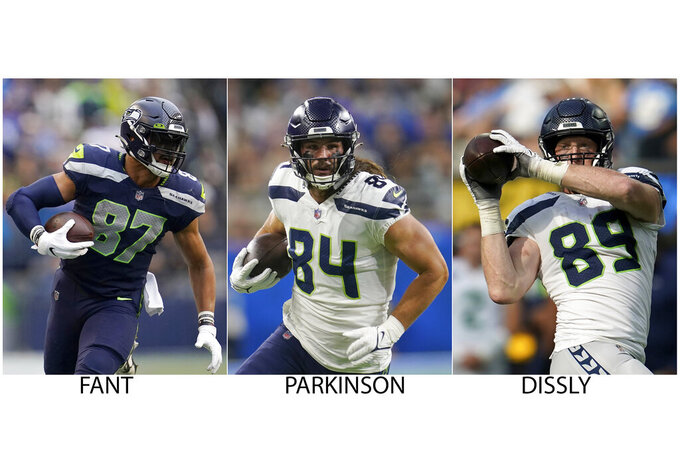 RENTON, Wash. (AP) — When going through the list of offensive difference-makers that have helped the Seattle Seahawks to their surprising 6-3 start, the names of Will Dissly, Noah Fant and Colby Parkinson aren’t usually the first to come to mind.

Maybe Seattle’s trio of tight ends should be recognized and appreciated a little more as a key reason why the Seahawks are finding as much success as they have through the first half of the season.

“They are all good, they can all be starters in this league,” Seattle QB Geno Smith said. “They do a great job of collectively working together. I think overall, each one of those guys are unique in their own way, and they all bring an added dimension to the offense.”

The numbers from Seattle’s tight ends trio aren’t overwhelming. But each has become such an important part for the Seahawks offense — both as blockers and pass catchers — that Seattle is finding ways to get them on the field more often.

Those might not seem like significant numbers in the bigger scheme of how many offensive plays have been run over nine games.

But for Seattle, it is an important number. Seattle’s “13" personnel with three tight ends and one running back is the third-most used formation by the Seahawks, and 32.9% of their plays out of that formation have resulted in first downs.

“All three of those guys can do a good job in the passing game whether they are running routes or protecting, and then also in the run game being versatile and being able to handle whether it is in-line or second-level blocks,” Seattle offensive coordinator Shane Waldron said.

Many teams don’t have three tight ends with the skills and capability of what Seattle has with its group. Fant was a key piece of the trade that sent Russell Wilson to Denver in the offseason. Dissly was a priority re-signing for Seattle after going to free agency for the first time in his career and came close to following Wilson to Denver. Parkinson was a fourth-round pick by the Seahawks in 2020 who struggled with injuries for his first two seasons while also learning more about the position after playing more as a hybrid wide receiver in college at Stanford.

Individually, each has their own strengths. Dissly is an exceptional blocker. Fant has standout speed for a tight end. Parkinson is hard to miss as a 6-foot-7 target with good hands. But it’s collectively where they’ve found a way to make a difference for the Seahawks this season.

None of the three is going to end the season with extraordinary numbers in the passing game. But as a combined trio, they could rival the best and most productive in the league.

“When you do have a blocking tight end, you know, when you don’t have the next guy who can also block, you can get really predictable on what you can do,” Dissly said. “But with Noah and Colby everyone’s blocking, everyone’s running routes. So it just really puts the defense at a tough spot of what we’re going to do and what defenses they want to call to prevent certain plays.”

As receivers, Fant leads the way with 27 catches. Dissly has 24 receptions and is tops with three TD catches among the group. Parkinson has 12 receptions and a TD. Seattle is the only team in the league with three tight ends having at least 12 catches and at least one touchdown.

“That’s what our offense is predicated around, being strong all over the place,” Fant said. “Our tight end room, it’s a strong room. I think it is something that helps our team a lot.”